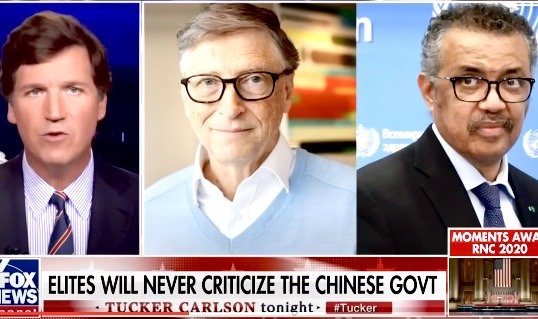 On his top-rated talk show last night, Carlson stated that the sweeping social and economic changes that have inflicted the world since the COVID-19 coronavirus lockdown will not end when a vaccine is developed.

“The World Health Organization says that finding the vaccine is not the goal,” he said.

“Reordering society is the goal. Quote, ‘We will not, we cannot go back to the way things were.’ That’s a direct quote from the leader of the World Health Organization, Dr. Tedros (Adhanom Ghebreyesus) who, by the way, is not really a doctor,” Carlson continued, referring to the fact that Tedros’ doctorate from the University of Nottingham is in public health.

The director of the WHO has stated that “the COVID-19 pandemic has given new impetus to the need to accelerate efforts to respond to climate change.”

Carlson noted that billionaire Bill Gates wrote something similar in an essay he posted earlier this month. In the essay, Gates regretted that the pandemic will lead to only an 8 percent reduction in carbon emissions this year.

“Consider what it’s taking to achieve this 8 percent reduction,” the influencer wrote.

“More than 600,000 people have died, and tens of millions are out of work. This April, car traffic was half what it was in April 2019. For months, air traffic virtually came to a halt,” he continued.

“What’s remarkable is not how much emissions will go down because of the pandemic, but how little.”

The billionaire also believes that within 10 to 20 years the economic damage caused by climate change will “likely be as bad as having a COVID-sized pandemic every 10 years.”

Gates believes that COVID-19 contains a lesson about “climate change.”

“Health advocates said for years that a pandemic was virtually inevitable,” he wrote.

“The world did not do enough to prepare, and now we are trying to make up for lost time. This is a cautionary tale for climate change, and it points us toward a better approach,” he continued.

“If we start now, tap into the power of science and innovation, and ensure that solutions work for the poorest, we can avoid making the same mistake with climate change.”

Carlson objected to Tedros’ and Gates’ silence over the fact that China is responsible for both the Wuhan coronavirus and massive amounts of carbon emissions, scoffing that neither man would ever “meaningfully criticize the Chinese government.” The Fox News host believes that both men think of climate change and the pandemic as “useful pretexts for mass social control.”

“Both are essentially unsolvable crises that they can harness to bypass democracy and force powerless populations to obey their commands,” he said.

Carlson pointed out that Tedros and Gates do not get equally as upset about the epidemics of opiate abuse and suicide in the United States because such deaths are “useless to them.” Earlier in his monologue, the host noted that nobody in Virginia, which has asked for mandatory vaccinations against COVID-19, is asking for mandatory vaccinations against hepatitis, HIV, or meningitis, despite the fact that meningitis kills more college students than coronavirus does.

Carlson observed that the coronavirus spread from China through Europe to every major city in the West, and that the WHO had done nothing to stop this and even spread disinformation. The lessons he takes from this are that “globalism has risks” and that “the WHO is corrupt.”

Another major figure who has connected the pandemic with the physical health of the planet is Pope Francis. In his Wednesday audience last week, the pontiff stated that when the pandemic is over, we should not act as though it hadn’t happened.

“Many want to return to normality and restart economic activities,” he said.

“Of course, but this ‘normality’ should not include social injustice and the destruction of the environment. The pandemic is a crisis and one does not leave a crisis the same: either we leave better or we leave worse,” the pontiff continued.

“We should leave better, to ameliorate social injustices and the environmental decay.”