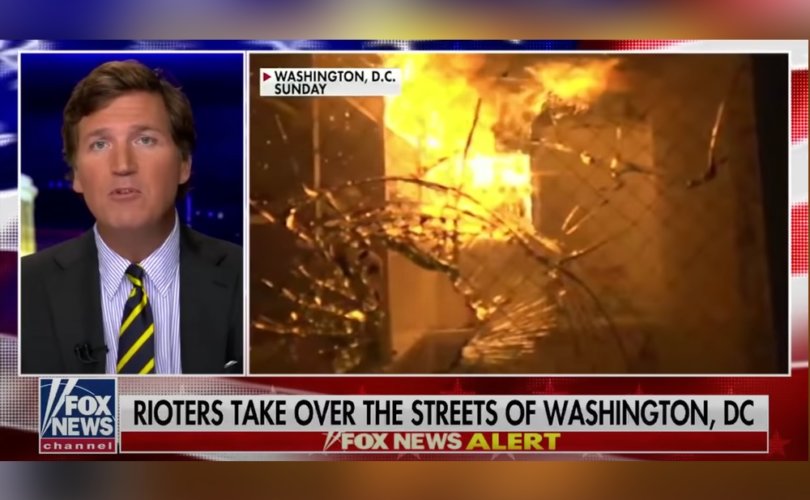 UNITED STATES, June 3, 2020  (LifeSiteNews) — Fox News anchor Tucker Carlson has strongly criticized U.S. political leaders around the country and across the political divide for failing to take effective action to stop the ongoing violent leftists riots in many American cities.

“The nation went up in flames this weekend,” Carlson began his Monday evening show.

“No one in charge stood up to save America. Our leaders dithered, they cowered, they openly sided with the destroyers. In many cases they egged them on. Later, they will deny doing any of this – they’re denying it now. But you know the truth because you saw it happen. This is how nations collapse – when no-one in authority keeps order and so many in our professional class encourage violence,” he continued.

“American citizens are forced to defend themselves – they have no choice. No one else is going to defend them. They know that now.”

Carlson presented a host of video footage from cities around the U.S. showing many scenes of brutal and distressing violence inflicted on innocent people, and the wanton destruction of both public and private property.

The popular Fox News anchor drew attention to a (now deleted) tweet by the Fairfax County Democratic Convention (FCDC) which endorsed the riots, saying, “Riots are an integral part of this country’s march towards progress.” The FCDC has since removed the tweet and said they do not endorse rioting.

A public statement from the FCDC described the response to the murder of George Floyd as “overwhelmingly peaceful protests” and added that they were reviewing their social media policies, but failed to apologize for the post.

“A volunteer retweeted a message, without leadership review, and was subsequently removed,” the FCDC said.

In a post published to Twitter on May 28, Kaepernick wrote: “When civility leads to death, revolting is the only logical reaction. The cries for peace will rain down, and when they do, they will land on deaf ears, because your violence has brought this resistance. We have the right to fight back! Rest in Power George Floyd.”

When civility leads to death, revolting is the only logical reaction.

The cries for peace will rain down, and when they do, they will land on deaf ears, because your violence has brought this resistance.

We have the right to fight back!

Carlson, regarded as one of U.S. media’s strongest conservative voices, was particularly critical of Pence for not speaking out strongly enough on the rioters.

“When the violence began what we needed more than anything was clarity in the middle of this…someone in America needed to tell the truth to the country,” Carlson said.

“Instead, almost all of our so-called conservative leaders joined the left’s chorus, as if on cue,” he continued.

“On Friday, as American cities were being destroyed by mobs, the Vice President of the United States refused to say anything specific about the riots we were watching on television. Instead Mike Pence scolded America for its racism.”

And while much of the media have been critical of Trump for taking what they consider to be an inappropriately heavy-handed response with people they describe as “peaceful protestors,” Carlson was instead outspoken in suggesting that Trump’s response to the riots has not been strong enough.

After showing a video recording of a Fox News crew being harassed and attacked by rioters, Carlson asked: “What about the president, where was he during all this?”

“If you can’t keep a Fox News correspondent from getting attacked directly across the street from your house, how can you protect my family? How are you going to protect the country? How hard are you trying?” he continued.

“On Twitter the next morning the President reassured America that he and his family were just fine. The federally funded bodyguards had kept them safe. He did not mention protecting the rest of the nation, much of which has been on fire. He seemed aware only of himself.”

“For people who would like Donald Trump, who voted for Donald Trump, who support his policies, who have defended him for years and years against the most absurd kinds of slander, this was a distressing moment.”

When the riots began in Minneapolis last week Trump called on state leaders to act strongly to protect law and order, saying that if they failed to do so he would “send in the National Guard & get the job done right.”

Trump indicated earlier today in a post on Twitter that the National Guard is ready to take action to protect. Trump has also announced he will declare Antifa, the far-left group behind some of the violence, as a terrorist organization.

The National Guard is ready! https://t.co/AifVRgWOlM

The United States of America will be designating ANTIFA as a Terrorist Organization.

Some conservatives have pointed out that rioters and protestors are largely ignoring coronavirus lockdown rules and “social distancing” guidelines, despite many leftists having vigorously supported them just weeks ago.