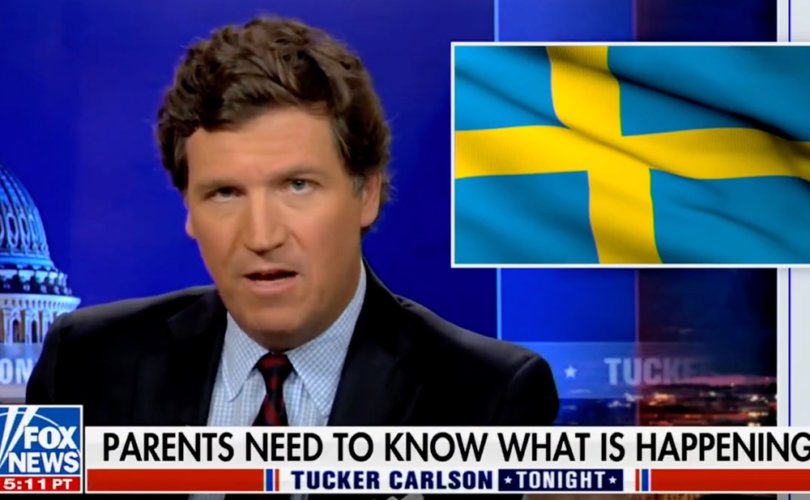 (LifeSiteNews) — Fox News host Tucker Carlson exposed the claim that transgender surgeries prevent suicidality, arguing that those who have obtained the destructive operations are actually far more likely to commit suicide than those who don’t.

In a clip posted to social media by The Daily Caller on Monday, Carlson said activists “with a sexual agenda, not a political agenda, have pushed so hard to make” transgender surgery “legal and then fashionable that we’ve ignored it. But the numbers have been there.”

In his monologue, Carlson referenced a Swedish cohort study published in 2011. According to the study’s abstract, “persons with transsexualism, after sex reassignment, have considerably higher risks for mortality, suicidal behavior, and psychiatric morbidity than the general population.”

Carlson explained that, according to the research that surveilled actual outcomes spanning three decades, people who obtained so-called “gender-affirming surgeries” were “19 times more likely to kill themselves than people who hadn’t; the general population.”

Tucker Carlson: “People that underwent ‘gender-affirming surgery’ were 19 times more likely to kill themselves than people who hadn’t.” pic.twitter.com/xXG0fwn2BR

“That’s not a story? Really?” Carlson said, arguing that the legacy media “isn’t covering this at all. They’re encouraging it.”

The popular Fox News host further noted that advocates of the transgender ideology are “hiding the reality” of the permanently destructive surgeries “behind euphemisms,” framing actual castration as “gender-affirming care.”

The study noted that a 2020 correction to a 2010 meta-analysis, “the largest existing study on this subject to our knowledge,” had “demonstrated no mental health benefit from gender-affirming surgery after comparison with a control group of [transgender and gender diverse] people who had not yet undergone surgery.”

The JAMA study also appears to disprove later claims from one of the co-authors of the 2011 Swedish study, who has argued that her research has been misrepresented. In an interview with Transadvocate, Dr. Cecilia Dhejne said “[o]f course trans medical and psychological care is efficacious,” citing the same 2010 meta-analysis which has since been corrected to state that no mental health benefits from so-called “gender-affirming surgery” had been demonstrated.

Meanwhile, Carlson’s comments regarding the harms of transgender surgeries come as conservatives have recently upped their game in addressing the cultural celebration of transgenderism and the sterilizing drugs and mutilating surgeries that accompany it.

This week, Daily Wire podcaster and author Matt Walsh, who famously took on transgender ideology with his documentary What Is A Woman?, published the explosive results of his investigation into the practices of a Nashville, Tennessee hospital’s transgender clinic.

According to Walsh, Vanderbilt Hospital “got into the gender transition game admittedly in large part because it is very financially profitable. They then threatened any staff members who objected, and enlisted a gang of trans activists to act as surveillance in order to force compliance.”

“They now castrate, sterilize, and mutilate minors as well as adults, while apparently taking steps to hide this activity from the public view,” he said. “This is what ‘health care’ has become in modern America.”

Walsh is now working with lawmakers to draft a bill that would shut down the hospital’s child gender transition program.