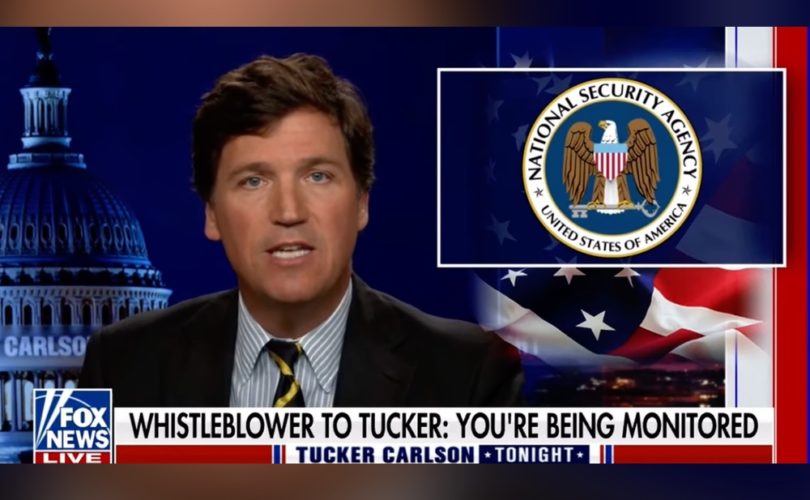 WASHINGTON, D.C., June 29, 2021 (LifeSiteNews) – On Monday evening, Fox News host Tucker Carlson revealed that a “whistleblower within the U.S. government” told him the National Security Agency (NSA) is spying on him with the intention of leaking sensitive information and facilitating the cancelling of his popular program.

In the less than two-minute segment, Carlson said a “whistleblower within the U.S. government,” had “reached out to warn us that the NSA is monitoring our electronic communications and is planning to leak them in an attempt to take this show off the air.”

He said ordinarily his team would be skeptical of such a shocking claim, but the “whistleblower, who is in a position to know, repeated back to us information about a story that we are working on that could only have come directly from my texts and email.”

“The NSA captured that information without our knowledge and did it for political reasons,” Carlson said. “The Biden Administration is spying on us. We have confirmed that.”

“It’s illegal for the NSA to spy on American citizens. It’s a crime. [This is] not a third-world country. Things like this should not happen in America. But unfortunately, they do happen, and in this case they did happen,” said the host of the highest-rated program on cable news.

In response, Carlson conveyed his team filed a Freedom of Information Act (FOIA) request, seeking “all information that the NSA and other federal agencies have gathered about this show,” while also contacting the press offices of both the NSA and the FBI. Lamenting that these efforts are “mostly a formality” and they “don’t expect to hear much back,” he called on Congress to intervene.

“Only Congress can force transparency on the intelligence agencies, and they should do that, immediately,” he said.

Rep. Ken Buck (R-CO) tweeted that “if true, this is a massive violation” of “our civil liberties.”

If true, this is a massive violation against our civil liberties. The NSA must respond to Congress immediately. https://t.co/dVDQbv37gn

In 2013, whistleblower Edward Snowden – who worked as a contractor for the CIA – leaked highly classified government documents from the NSA revealing how the federal government was collecting far more data of personal communications than was previously known.

Other whistleblowers at the time confirmed that these federal agencies are “collecting everything,” “no digital communication is secure,” and these capabilities allow authorities to “target anybody in the country” they desire.

In commenting on this report, one writer from The Last Refuge, a conservative commentary website dedicated to privacy rights, observed the following:

Snowden had warned that the federal government had constructed a surveillance power which would provide a “turnkey tyranny” in the near future. In a 2019 interview with Joe Rogan, according to points summarized by W.J. Astor at Breaking Views, the CIA whistleblower conveyed that “we live naked before power. Companies like Facebook and Google, together with the U.S. government, know everything about us; we know little about them. It’s supposed to be the reverse (at least in a democracy).”