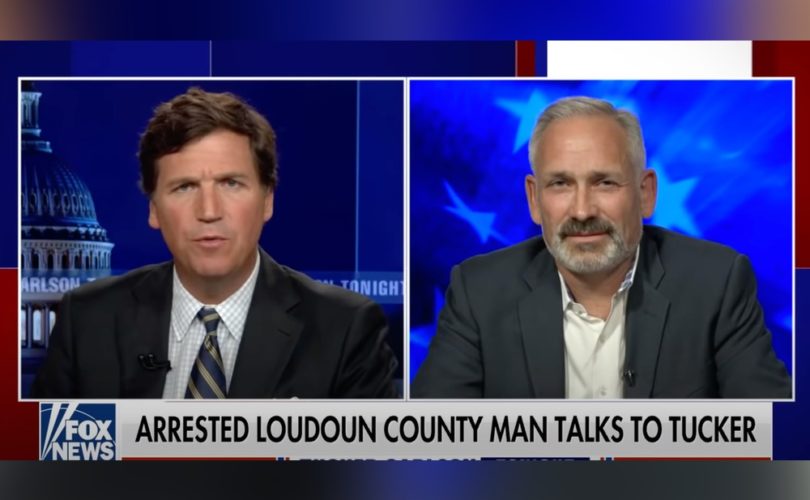 June 25, 2021 (LifeSiteNews) – A man arrested protesting critical race theory (CRT) and proposed transgender policies at a public meeting of the Loudoun County School Board in Northern Virginia appeared on Tucker Carlson Tonight on Wednesday, saying free speech “is the most sacred of all of our rights.”

The popular FOX News host explained that public schools in Loudoun County “have gone insane” by replacing traditional teaching with “indoctrinating children with creepy and poisonous racial theories.” The school board has thrown out western classical literature, like Harper Lee’s To Kill a Mockingbird, and instead children “are assigned pornographic novels and told America is an evil, racist place,” Carlson lamented.

Consequently, “parents in Loudoun County have been revolting against this,” Carlson explained, before displaying some clips of the Tuesday meeting, organized by the Loudoun County School Board “to solicit comments.” Only a handful of parents were afforded the chance to air their complaints about board’s decisions and their kids’ educations before the meeting was prematurely closed and the gathering declared “unlawful.”

‘If you want to redress your grievances about a school board, there’s no better place to do it than at a school board meeting,’ Tigges said, yet as the meeting progressed and the board grew more tired of the opposition they faced, they attempted to close the meeting early and have the meeting declared ‘unlawful.’

“The Western culture and values that brought forward Christianity and the Founding documents are being called evil and racist,” criticized one father, before the board absconded. “As long as you Marxists push your unconstitutional agenda on my child, she will not be returning to Loudoun County schools,” another parent blasted, triggering cheers and applause.

“In this case we went on to public land, went into a public auditorium, we were there for a public forum that we were invited to, and I was signed up to give public comment,” Tigges told Carlson.

“If you want to redress your grievances about a school board, there’s no better place to do it than at a school board meeting,” Tigges said, yet as the meeting progressed and the board grew more tired of the opposition they faced, they attempted to close the meeting early and have the meeting declared “unlawful.”

“We were supposed to go until 7:00 p.m., until the school board heard something they didn’t like, which was … applause for one of the people we were supporting, [former state] Senator Dick Black.”

Black had accused the board of having a “dark history of suppressing free speech” and told board members he was “disgusted by your bigotry and your depravity,” prompting applause and mass cheering from the crowd in the room.

Following Black’s comments, the board held a vote to close the meeting, after which footage showed the crowd becoming restless and accusing the board members of being cowards, with impassioned calls for them to resign.

Tigges, who is also a local businessman, explained that “all 500 parents” who had registered to appear at the forum “had their First Amendment rights trampled on by the Loudoun County School Board and superintendent,” who had quashed their opportunity to be heard.

“But there was not violence, there [were] not crazy goings-on,” continued Tigges. “People stayed there – they actually started singing.” Since many parents remained gathered, they decided that “if the school board didn’t want to hear it [their views], we were going to hear from one another.”

“We allowed a very orderly, peaceful process of allowing people to actually start speaking … They lined up and peacefully started presenting their perspectives; and we allowed the other side to do the same.”

However, Tigges explained that “suddenly it was declared an unlawful assembly,” owing to an isolated kerfuffle with officers described by Tigges as “a complete leftist diversion tactic that was pre-planned because no one that was lined up to speak was involved in any of that [scuffle].”

Tigges can later be seen telling police that they “are actually supporting the suppression of people’s rights” by forcing parents out of the auditorium and threatening arrest. Tigges then told officers that he would not leave the meeting before it was scheduled to finish and everyone who wanted to speak had the chance. At 5:45 p.m., over an hour before the meeting was originally arranged to close, police arrested Tigges.

“If they keep acting like this, they’re going to get a revolution, this is what happens when you ignore legitimate complaints,” Carlson commented. “People get radical. I hope it doesn’t happen, but you can see how it could.”

“They didn’t like what you had to say so they declared your talking illegal and then they got these stooge cops, who should be ashamed of themselves, to arrest you for the crime of saying something the school board didn’t like,” Carlson summarized, to which Tigges replied “That’s correct.”

— Article continues below Petition —
PETITION: Stand with Hungary for protecting children from LGBT propaganda
Show Petition Text
44703 have signed the petition.
Let's get to 45000!
Thank you for signing this petition!
Add your signature:
Show Petition Text

Tigges added that free speech “is the most sacred of all of our rights. And it takes an amazing amount of justification to shut down free speech.”

“Not liking it is not adequate justification,” said Carlson, adding that “only until people are willing to be arrested for exercising their constitutional rights will those rights be protected.”