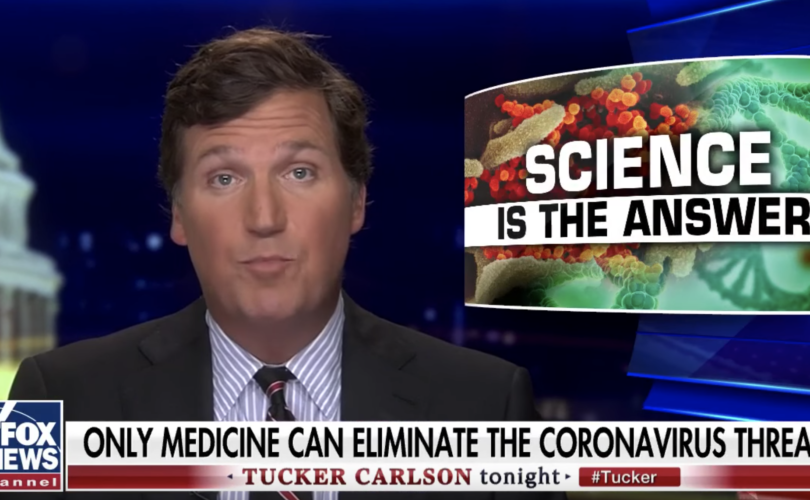 WASHINGTON, D.C., March 26, 2020 (LifeSiteNews) ― The media have been lying about a potentially effective treatment for the COVID-19 coronavirus, Tucker Carlson reported this week.

“Well, here’s why,” the Fox News pundit told his audience last night. “Donald Trump is for it.”

Ever since the American president announced the use of hydroxychloroquine as a treatment for the coronavirus sweeping the world, the American media have been downplaying its potential, lying about it, and manipulating the public.

“If Trump is for it, they're against it, even if it might save American lives,” Carlson declared.

“What reactive children they are. And they immediately began a sustained push to discredit the drug long before the clinical results were in.”

Carlson cited both CNN and NBC, who accused the president of selling “unsubstantiated” or “false” hope. Some journalists have even held Trump responsible for the deaths of people who poisoned themselves with what they hoped were doses of hydroxychloroquine. CNN ran a story in which it claimed that a man in Arizona “has died after an apparent attempt to self-medicate with that drug.” In reality, the man and his wife swallowed chloroquine phosphate, an aquarium cleaner, allegedly believing this would protect them from the virus.

“During the course of that segment, by the way, CNN never mentioned that the man ate aquarium cleaner and not medicine,” Carlson observed.

“They lied about the substantial – in fact, the central – facts of what happened because they thought it might advance a political agenda.”

CNN then cited three Nigerians who had died from overdoses of the drug, as if they had done so because of Trump’s announcement.

Carlson was clearly disgusted by this politicization of a possible treatment for the coronavirus.

“Now, keep in mind, this isn't a tax bill they're lying about,” he said. “It's a potentially life-saving medicine that we are desperately trying to evaluate in the middle of a global pandemic.”

“So why is Bloomberg News writing about it?” Carlson asked.

Carlson stated that the Chinese study had nothing to do with the way that the drug was being used in the USA, and that the story “misleads.” He accused the media of “manipulating” its audience.

“This is what happens when science becomes political,” Carlson added.

“Suddenly, people start lying, and you can't trust anything you hear. That's a very dangerous thing to do at a moment like this. The truth is essential.”

Even a governor has been hating on hydroxychloroquine. Democrat Steve Sisolak, the governor of Nevada, has issued an emergency order banning state doctors from prescribing the drug for coronavirus unless it’s administered in a hospital.

“Now, Sisolak is a politician; he's not a doctor,” Carlson said.

“But he didn't hesitate to pronounce the drug ‘unproven’ as a treatment for coronavirus,” he continued.

“Well, that's true as a technical matter. But doctors prescribe medicines in new ways all the time. It's called ‘off-label usage.’ It's legal and very common in places where Democratic governors don't decide to micromanage the details of medical care.”

There is now a shortage of hydroxychloroquine in the U.S., however, in part because doctors are apparently stockpiling it for themselves and their families. Carlson said that this proves that Donald Trump is not the only person who believes it can work.

“A lot of practicing physicians think so, too,” he added.

“Our leaders should be clear about that. And yet many of them are lying about it at a time when we are desperate for the truth. The thing we need, above all, is the truth.”

Carlson had stated that hydroxychloroquine is, in many ways, “the ideal medicine.”

“You may have taken it if you traveled abroad. It's been approved for use in this country for 65 years. It is cheap. It's considered safe. A month’s supply of it costs about 20 bucks,” he continued.

“So, in a lot of ways, hydroxychloroquine is the ideal medicine. If it turns out to be an effective treatment against coronavirus, things will change fast in this country and for the better.”

Carlson noted that “scattered reports” from health care providers across the U.S. say hydroxychloroquine is effective, that it is being prescribed in France, and that Dr. Anthony Fauci, the director of the National Institute of Allergy and Infectious Diseases, has said he would try it on patients if he was treating them directly.

Recently an American coronavirus patient stated that he would have died had he not requested the drug.

Other drugs that have potential are favipiravir, a Japanese antiviral drug; remdesivir, the Ebola drug; and lopinavir and ritonavir, HIV drugs.