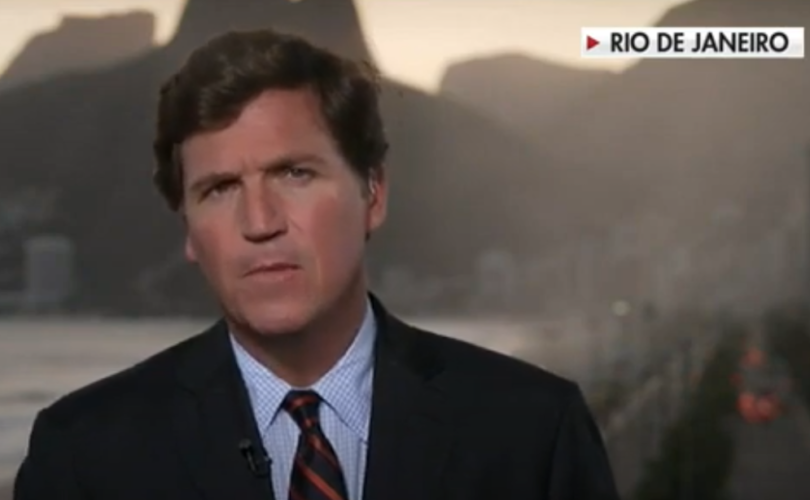 (LifeSiteNews) — Covering the extreme reactions of pro-abortion leftists following the “magnificent” Dobbs decision on Friday, television host Tucker Carlson concluded the roots of such a “coordinated attack on family and on children” comes directly from the financial interests of “corporate America.”

In his Monday monologue, the Fox News broadcaster, who enjoys the highest ratings among cable news programs, lamented that leftists of years past were at least able to recognize abortion as a tragedy that, in the words of former president Bill Clinton, should be “safe, legal and rare.”

Carlson also quoted Joe Biden who said in 2006, “I do not view abortion as a choice … I think it’s always a tragedy.”

“You don’t hear that on the left anymore, ever,” he observed. “In fact, many on the left now behave as if abortion is itself a positive good, excited by the fact that a child who would have been born wasn’t. Think about that for a moment – celebrating the failure of a child to come into the world. What does that say about how you feel about children or about people?”

“In fact, some behave as if having an abortion is preferable to having children,” Carlson said. And this can be inferred by the fact that “no one on the left encourages women to brag about having kids. Having more than a couple of children at most, in fact, is considered weird and embarrassing.”

“But abortion? That’s something to tell your friends about. There’s even a ‘Shout Your Abortion’ campaign, highly well-funded, complete with perky T-shirts bragging about ending your pregnancy. What does that say? Nothing good,” he said.

READ: Patagonia offers to bail out employees ‘who peacefully protest’ for abortion

Showing footage of pro-abortion rioters “proudly shouting about their abortions” all over the country this last weekend, he concluded that these violent responses against the U.S. Supreme Court’s Friday release was “not just an attack on the right of people to govern themselves. It’s something bigger than that. What you’re seeing is a coordinated attack on the family and on children.”

“People at these protests are angered at the idea that children are being born,” Carlson said. He then showed an image of a woman with two young children at Friday’s protest outside the U.S. Supreme Court where she carried a sign saying, “DON’T FORCE THIS ON ANYONE!”

Tucker described the photo as “a mother humiliating her children in public, implying they are a burden to her because they are still living.”

“Where does an attitude like that come from?” he asked. “Well, as it turns out, that attitude comes from the same place the Democratic Party now gets all of its attitudes, directly from corporate America. Corporate America wants you childless.”

Recalling a brief history of labor over the last century where for a spell corporations supported family life through their policies, Carlson explained that at some point this all changed, and workers often had to form unions to ensure they were given wages adequate to support their families.

Because of this, “labor costs soared. So corporate America, in response to this, developed a new model: hire single women,” Carlson observed.

This has happened in many places “including in the traditionally male banking sector [where] young women now make up the majority of new employees and you can see why they do. They work hard, they’re reliable [and] they tend to be loyal to the companies they work for,” the television host explained.

“The one downside to hiring young women is they can get pregnant [and] if you’re running the H.R. department at Citibank, that is the last thing you want. Children make your health care plan more expensive. Worse than that, they tend to compete with an employee’s attention. Responding to after work emails seems less pressing to most new moms than putting their own kids to bed,” Carlson said.

“That’s a huge problem for big companies, so they have every incentive to prevent their workers from having children,” he explained.

“‘Give us the best years of your life and in exchange we’ll pay you what’s effectively a subsistence wage in whatever overpriced urban hellscape we’re based in and then take from you the one thing that might give your existence meaning and joy in middle age, which is having children. That’s the deal we’re offering’” Carlson mocked.

“That is the deal they’re offering, but they can’t say that. It would sound like what it is, which is exploitation, no better than what the cotton mills once did to 14-year-old girls,” he said.

“So, instead of saying that, which is the truth, corporate America uses the language of the social movement it created, feminism, to spin the entire arrangement as some sort of progressive liberation movement. ‘Fight the patriarchy. Have an abortion. It’s got nothing to do with lowering our labor costs, we promise,’” he parodied.

“But of course, it does have everything to do with lowering their labor costs. Across the country they are making that case: abortion as liberation. Many of the biggest American companies are now paying female employees to have abortions, to end their pregnancies,” he warned.

Identifying several large corporations that are offering to pay for these killings, Carlson offered Dick’s Sporting Goods as one example explaining how they are offering female employees up to $4,000 if they abort their child. Yet, as Breitbart News discovered, the same financial incentive is not offered “to pregnant employees who choose to have their babies rather than get an abortion.”

But rather than question or resist this arrangement, “so many Americans who ought to know better have fallen for it,” Carlson observed. Instead, “your average college-educated NPR listener nods in vigorous bovine agreement and then becomes completely hysterical when someone suggests that maybe there’s another way to live, that it’s at least theoretically possible that raising your own children might be more rewarding as a life choice than commuting into a slum on public transportation in order to claw your way up to middle management at Deutsche Bank. But the very thought of that, of turning down Deutsche Bank to bring new life into the world drives these people into a frenzy of rage.”

Two giant investment firms control almost everything you buy: Here’s why you should care