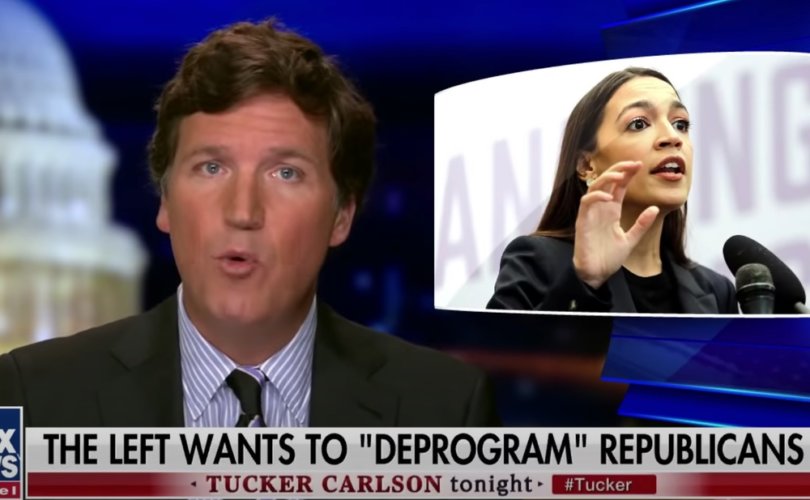 January 20, 2021 (LifeSiteNews) – Instead of celebrating their political victories, prominent Democrats are “plotting revenge” against Trump supporters and comparing them to terrorists, Tucker Carlson warned during his show yesterday evening.

“They're not celebrating. That's the remarkable thing. No one in the Democratic party seems happy tonight. They're angrier than ever. Instead of taking victory laps, they are plotting revenge against the people they just beat. They're thinking of new ways to injure and humiliate and degrade their political opponents, make it impossible for them to work, again throw them in jail, destroy their lives,” Carlson said.

Tucker pointed out that General Stanley McChrystal, who he wryly referred to as “the strategic genius who can take credit, if you can call it that, for running the longest losing war in American history,” outright compared Trump supporters to terrorists he saw in Iraq.

“I did see a similar dynamic in the evolution of Al Qaeda in Iraq, where a whole generation of angry Arab youth with very poor prospects followed a powerful leader who promised to take them back to a time, to a better place, and he led them to embrace an ideology that justified their violence. This is now happening in America,” McChrystal was quoted as saying.

Tucker then highlighted a statement by Andy McCabe, “The former high-level FBI official who was canned for lying and corruption,” comparing Trump supporters who believe the election was rigged to ISIS terrorists.

“When we looked at those Americans who traveled to Syria for the purpose of joining the Islamic State when you put all of those faces and names down in one place, you had doctors, lawyers… Some people are very vulnerable to and drawn into that core lie of any extremist movement, and that is exactly what we’re seeing now with these — this particular group of Trump supporters. They have invested, on an emotional and spiritual level, in this grievance that the election was stolen from them and they seem to be completely manipulated by that propaganda,” McCabe had said.

Carlson went on to play a reel of no less than seven people, including Speaker of the House Rep. Nancy Pelosi and former FBI director James Comey, calling for a “9-11 style commission” to inquire what exactly happened and who was involved in the breaching of the Capitol.

Tucker went on to address how prominent Democrats would like to “handle” such “insurrectionists.”

“So what do you do with insurrectionists like that?” How do you handle them? Simple force doesn't always work. These are hard cases. You need to re-educate people like that, possibly in camps. Re-education camps, if you will. You must de-program them for the safety of the rest of us,” quipped Carlson.

“Thankfully Sandy [Alexandria] Cortez has been thinking about this for quite some time, indeed, since she was a child growing up in leafy Westchester County. Some little girls played with dolls, but Sandy Cortez put her barbies in a secure enclosure and re-educated them because they were thinking bad things, forbidden things, so Sandy Cortez knows exactly what to do now.”

Carlson proceeded to play a clip of Rep. Ocasio-Cortez calling for “de-radicalization programs.”

“We had a program addressing white supremacists,” the far-left socialist Democrat said. “We had programs, federal programs, that went towards funding organizations like these that de-radicalized people and President Trump pulled the plug on federal funding for some of these programs. And so one thing that we know is that we have to get that funding right back up and we probably need to double, triple, quadruple or increase funding for these de-radicalization programs.”

“So you listen to that and all of this and you realize the totalitarian instinct is always the same, only the names, the dictators change. First you strip people of their right to speak out loud honestly. Then you prevent them from defending themselves and their families, and then, because you now can, force them at gunpoint to read your catechism, to accept your orthodoxy,” Carlson commented.

“You wonder if Sandy Cortez plans to make Trump voters sign written statements affirming they have been deprogrammed. Of course. That's always part of the process. The scary thing is that's where we're heading. Sandy Cortez and her friends are no longer a fringe element within the Democratic party,” he continued.

“There are still reasonable people within the Democratic party. There are people who have a stake in this country, people who don't want to destroy it. Now is the time for those people to step up forcefully and call off the war their party is planning on millions of fellow Americans.”

“And it is war they're planning: a 9/11 commission, blanket censorship, mass arrests, deprogramming. These are not subtle indicators; these are fire alarms,” Carlson continued.

“They know their agenda is massively unpopular. The American people don't want to open our borders or defund our police,” Cotton told Carlson.