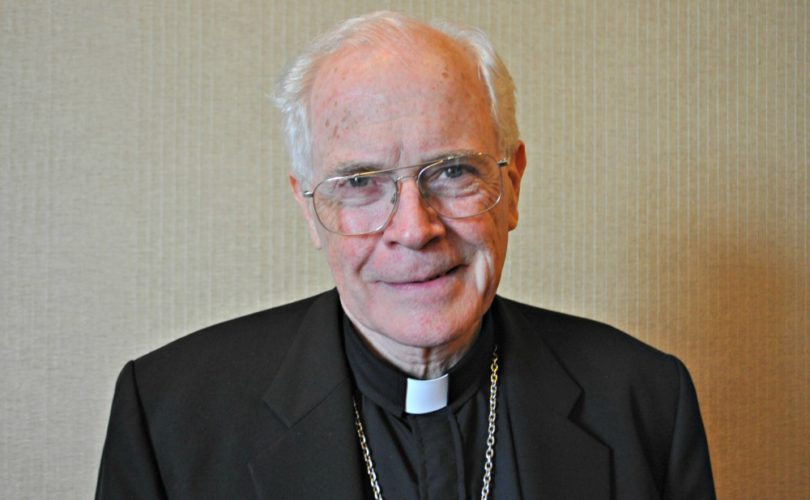 TULSA, OK, June 12, 2015 (LifeSiteNews) – Bishop Edward Slattery is standing strong amid flack after he pulled his Diocese of Tulsa out of a partnership with the Oklahoma Center for Community and Justice for sponsoring the city’s Gay Pride parade last Saturday.

“I’ve already received some diatribes, one from a Catholic,” Bishop Slattery told LifeSiteNews at the U.S. Bishops spring assembly in St. Louis. “I expect many more.” Asked what he intends to say to those who object, he responded that he would tell them he was just doing his job as a bishop.

“Well they didn’t make the statement,” the bishop told LifeSiteNews. “If we didn’t withdraw we would have sent a different message that would have been in conflict with the Catholic Church.”

In his letter announcing the bishop’s decision, Msgr. Gaalaas wrote, “To march in such a parade seems to us to be a deliberate and full-throttled expression of support for the so-called gay agenda, a central component of which is same-sex marriage.”

In the same letter, he stated that, “Among those teachings of the Church are all the things the OCCJ has traditionally stood for: the rights and dignity of every human being and the protest against bigotry and all unjust discrimination.”

After the parade, the OCCJ’s chairman Russ Florence told reporters the organization was indeed neutral on same-sex “marriage,” adding, “We don’t endorse specific religions or lifestyles. What we do endorse is respect for and understanding for all people.”

But Bishop Slattery says that OCCJ can’t have it both ways: it can’t be neutral while its board of directors march in the parade. The OCCJ’s response exemplifies “the dictatorship of relativism: ‘You believe what you want, and I’ll believe what I want, and we can both be Catholics.’ No you can’t. You have to stand for something. There has to be acceptance of the fact there are objective standards applied universally.”

Toby Jenkins, executive director of Oklahomans for Equality and organizer of the Pride Parade, said the organization was “dismayed” to have caused dissension within OCCJ but it wasn’t going to let the rift spoil its parade or “sour our celebration for marriage equality in Oklahoma.”

The OCCJ was originally the Tulsa chapter of the National Council of Christians and Jews, a group founded in 1927 in response to a resurgence in the Ku Klux Klan. But both groups changed their name in the 1990s to reflect the shift in human rights advocacy to behavioral minorities.

“They do good work, and so it was not easy for me to end our membership with them,” Bishop Slattery said. “But if I didn't, I would have sent a different message that would be very harmful to our Catholic Church, our Catholic teaching, and that has to do with same-sex marriage.”

“This is the problem we're having today in our society, is that you want everything. You want to be able to join everything, even though you don't agree with it,” he said. “It's the dictatorship of relativism, that's what Benedict calls it, it's the dictatorship of relativism. You can believe what you want, I can believe what I want, but we can both be Catholic.”

“You can't have that. You have to stand for something and then say that's what it is,” he added.