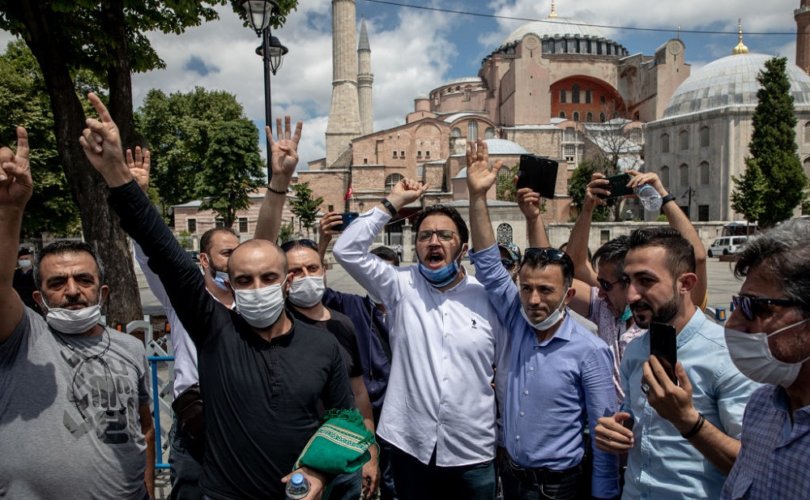 Turks cheering the decision to make Hagia Sophia back into a mosque.Chris McGrath / Getty Images

ISTANBUL, Turkey, July 22, 2020 (LifeSiteNews) — Following the announcement of the Turkish government that it would turn the Hagia Sophia museum, once the most important church in Eastern Christianity, into a mosque, presidential spokesman İbrahim Kalın invited Pope Francis to visit.

On July 12, the Holy Father had criticized the decision to convert the Hagia Sophia, which was announced two days earlier. “I think of Hagia Sophia,” the pope said during his Angelus address, “and I am very saddened.”

Originally built in the 6th century, Hagia Sophia was the largest church of the Byzantine Empire. In 1453, when Muslim invaders attacked and took over the city of Constantinople, it was converted into a mosque. Kemal Atatürk, as the first president of the Republic of Turkey, turned the mosque into a museum.

In talking to CNN, Kalın withheld this information from viewers. He simply said Pope Francis should not be saddened “because it’s been turned into a house of worship where the name of God will be invoked, rather than being a place for visits for tourists. The place was turned not from a church to a mosque, but from a museum to a mosque.”

Meanwhile, Greek president Katerina Sakellaropoulou announced on Twitter that she had asked the pope “to use his influence to raise the awareness of the international community about the conversion of [Hagia Sophia] into a mosque. I stressed that this decision by Turkey undermines the foundations of tolerance and deepens the rift between cultures and religions.”

I asked @Pontifex to use his influence to raise the awareness of the international community about the conversion of #HagiaSophia into a mosque. I stressed that this decision by Turkey undermines the foundations of tolerance and deepens the rift between cultures and religions.

“The Hagia Sophia was for nearly a millennium not only the greatest Church in the world, but the greatest edifice as well,” they pointed out. “Its purpose was to be a place of Christian worship par excellence. When the Roman Empire came to a conclusion by conquest, and the Great Church was converted into a mosque, this was an era when human events were advanced through violence. But this is not the way we live today.”

Instead, they continued, the creation of the modern Turkish state “is synonymous with a secular ideal of inclusivity. By changing the status of Hagia Sophia from a mosque to a museum, President Atatürk manifested this global monument to be a sign of transition from a theocratic empire, to a secular state that valued the equality of all its citizens.”

Dolan and Elpidophoros argued that the former church should remain a museum, “a symbol of encounter, history, spiritual aspiration, and human achievement of the highest order, glorifying the One God Who has made us all to be sisters and brothers of one human family.”

The Greek Orthodox Archdiocese of America even designated next Friday, July 24, as a “day of mourning and of manifest grief.”

“We ask that every Church toll its bells in lamentation on this day. We call for every flag of every kind that is raised on the Church property be lowered to half-mast on this day. And we enjoin every Church in our Holy Archdiocese to chant the Akathist Hymn in the evening of this day, just as we chant it on the Fifth Friday of the Great and Holy Fast,” wrote the Greek Orthodox bishops in the United States.

The United States Conference of Catholic Bishops (USCCB), while not explicitly joining in this call, tweeted approvingly about it.

The @goarch is inviting all Christians and people of goodwill to join in a Day of Mourning on July 24 for #HagiaSophia. They have asked that every Church toll its bells, every flag be raised to half-mast and that the Akathist Hymn is chanted or the rosary recited in the evening. pic.twitter.com/ib6R3wDiWQ

Both Pope Benedict XVI (in 2006) and Pope Francis (in 2014) visited the Hagia Sophia museum during their visits to Istanbul. Neither of them gave a speech at the museum.

Pope John Paul II was the first pope to pray inside a mosque when he visited the Syrian capital of Damascus in 2001. The mosque had been built on the site of a Catholic cathedral dedicated to St. John the Baptist.

Pope Benedict prayed in the Blue Mosque of Istanbul, right next to the Hagia Sophia, in 2006, even removing his shoes.

In 2014, Pope Francis also went to the Blue Mosque of Istanbul to pray. During his 2019 visit to Abu Dhabi, he visited the Sheikh Zayed Grand Mosque and subsequently signed the so-called Abu Dhabi Declaration. The document states, among other things, that the “diversity of religions” is “willed by God” — a sentence criticized by numerous bishops, including Cardinal Raymond Burke and Bishop Athanasius Schneider.

When Pope Francis called the mass murder of Armenians in Turkey a genocide in 2015,  Professor Mefail Hızlı, a top Muslim official in the Turkish capital of Ankara, countered, “Frankly, I believe that the pope’s remarks will only accelerate the process for Hagia Sophia to be re-opened for [Muslim] worship.”

Hızlı also claimed that Pope Francis’s remarks had “reflected a modern color of the crusader wars launched in these lands for centuries.”

Turkish presidential spokesman İbrahim Kalın said during his conversation with CNN that Christian mosaics and imagery within Hagia Sophia will be preserved. “They’re part of our cultural heritage, these beautiful mosaics describing Jesus Christ, Virgin Mary, and other Christian personalities,” he emphasized.

“They will be preserved untouched. We’re making some arrangements that during Muslim prayer times, they will be covered, but not touched, so that they will not be eroded or affected by light or by anything else,” Kalın said, pointing out that Hagia Sophia will remain accessible to tourists and visitors.