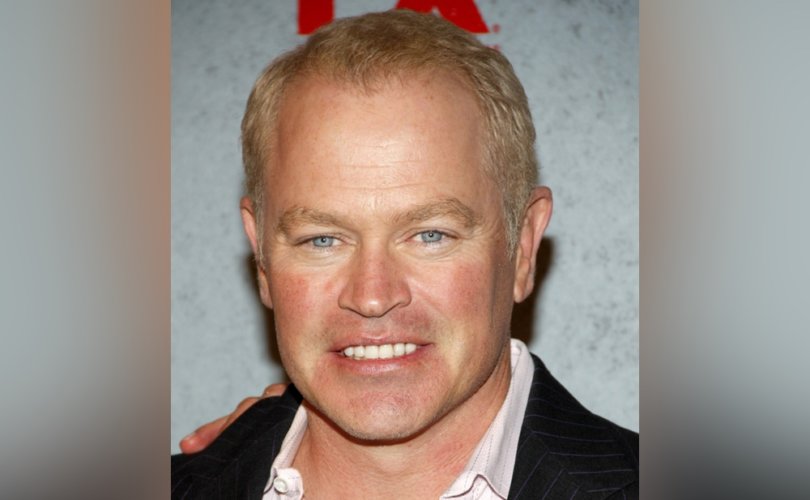 HOLLYWOOD, January 11, 2019 (LifeSiteNews) – It doesn’t seem possible, but there’s an actor in Hollywood who won’t kiss his co-stars, let alone participate in steamy scenes. And, his principled stance has made trouble come his way.

Neal McDonough, 52, has worked on-screen since his television debut in 1991. He’s appeared in such television shows as Quantum Leap, NYPD Blue, Band of Brothers, and Desperate Housewives, and in such films as Minority Report and Captain America: The First Avenger. McDonough has also done voice work in cartoon films: he played Bruce Banner in The Incredible Hulk, for example.

But McDonough has recently made headlines for saying that he was cut from the starring role of 2010’s TV comedy series Scoundrels because he wouldn’t do a sex scene with his co-star Virginia Madsen.

A faithful Catholic and a married father of five, McDonough says that his lips belong only to his wife, Ruvé Robertson McDonough, whom he wed in 2003.

“I won’t kiss any other woman because these lips are meant for one woman,” he told a celebrity magazine.

In his interview with Closer Weekly, published on January 3, McDonough said he was “surprised” by the decision to fire him from Scoundrels.

“I was [surprised], and it was a horrible situation for me,” he stated.

“After that, I couldn’t get a job because everybody thought I was this religious zealot. I am very religious. I put God and family first, and me second. That’s what I live by. It was hard for a few years.”

Being fired for not doing the raunchy scene was particularly disappointing for the actor, as he had successfully navigated the issue as a recurring character in Season 5 of Desperate Housewives.  McDonough played opposite star Nicollette Sheridan as Edie Brit’s husband Dave Williams.

“When [creator] Marc Cherry signed me, I said, ‘I’m sure you know, but I won’t kiss anybody,’”  McDonough told Closer Weekly.

“He was like, ‘But this is ‘Desperate Housewives!’ I said, ‘I know.’ He paused for about five seconds and said, ‘All right, I’m just going to have to write better.’ And we had a great time.”

The actor expressed his gratitude to God for his wife and children in the interview, saying that he goes to church daily to say thanks.

“Almost 20 years, five kids and just one heck of an awesome life later, to have her as my partner in everything, I’m just the most blessed guy I know,” McDonough told the celebrity magazine.

“That’s why I go to church every day and say thank you to God for everything he’s given me. And most importantly, thank you for giving me Ruvé, because, without her, I most certainly would not be talking with you right now.”