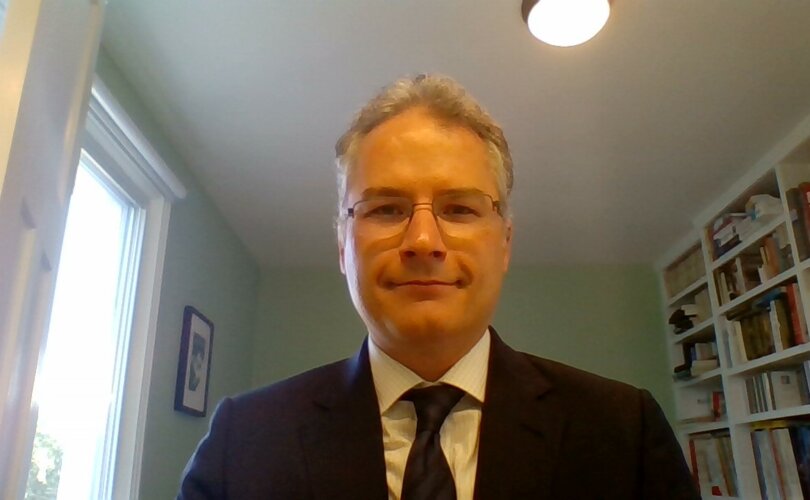 OTTAWA (LifeSiteNews) — Multiple tweets showing that Public Order Emergency Commission lawyer Gabriel Poliquin was vaccinated against COVID-19 appear to have been deleted since he suddenly collapsed on video during the Emergencies Act inquiry on Wednesday.

In the footage of Poliquin’s collapse, which was broadcasted live, the lawyer can be seen standing at a podium questioning Ontario deputy solicitor general Mario Di Tommaso about the anti-COVID mandate “Freedom Convoy” protest.

Taking a brief pause, Poliquin starts to open a plastic water bottle when he suddenly appears to lose consciousness as his entire body goes limp and his head slumps forward. A seemingly unconscious Poliquin then proceeds to fall off the podium, an event that is followed shortly by a loud thud and a sharp gasp by Di Tommaso.

Social media users quickly pointed to a now-deleted tweet from April 28, 2021 in which Poliquin wrote “#AstraZeneca” while including a picture of himself being vaccinated.

In another now-deleted tweet from June 30, 2021, Poliquin wrote, #vaxxedtothemax” while including another photo of himself in front of a large sign that read “I got vaccinated!”

In March 2021, Canada had paused the distribution of AstraZeneca’s COVID vaccine for people under 55 after numerous reports linking the experimental injection to blood clots and other adverse effects.

In May 2021, Alberta health authorities announced that a 50-year-old woman had died from vaccine-induced immune thrombotic thrombocytopenia (VITT) linked to the AstraZeneca shot, making it one of two officially confirmed vaccine-induced deaths in the country at that time.

The incident also drew a reaction from People’s Party of Canada leader Maxime Bernier, who sarcastically posted to Twitter:

That’s perfectly normal. It happens all the time. Nothing to be surprised about. https://t.co/2ZqsC94ZkH

This is truly extremely disturbing on multiple levels. https://t.co/gKfYLD1pEN

Poilquin ultimately provided an update as to his condition on Thursday, thanking people for their concern and informing them he “should be up and running in a few days.”