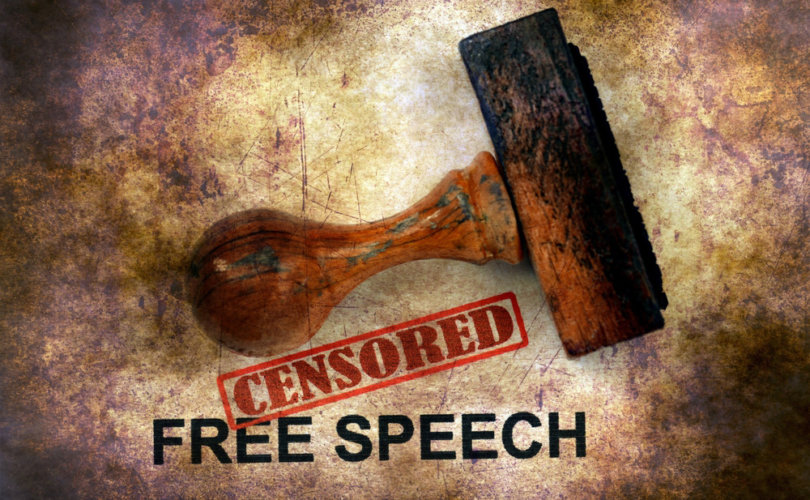 On Wednesday, Vice News reported that the primary Twitter accounts of McDaniel, Surabian, and GOP lawmakers such as Reps. Devin Nunes, Jim Jordan, Mark Meadows, and Matt Gaetz had disappeared from the drop-down menu that normally populates when typing in a name (searchers who already follow an account could still see the name; otherwise, only Nunes’ unverified, little-used secondary account showed up).

“Shadow-banning” is the unofficial term for limiting the visibility and reach of a social media account without notifying the target any change has been made.

A screenshot of a search for “ronna mcdaniel,” for instance, shows it yielded three suggested results for women with the same or similar names, but not the RNC chair. Vice’s Alex Thompson notes that this exclusion is the same tactic “deployed against prominent racists to limit their visibility.”

Furthermore, the report found that Democratic National Committee Chair Tom Perez and left-wing lawmakers such as Reps. Maxine Waters and Keith Ellison did not share the problem.

“Not a single member of the 78-person Progressive Caucus faces the same situation in Twitter’s search,” Thompson wrote.

McDaniel responded to the news by declaring that suppression of certain political views “should concern every American” and “Twitter owes the public answers.” President Donald Trump weighed in as well, promising to “look into this discriminatory and illegal practice at once.”

Twitter “SHADOW BANNING” prominent Republicans. Not good. We will look into this discriminatory and illegal practice at once! Many complaints.

A Twitter spokesperson responded by promising the company was “shipping a change to address this” and insisting that its “technology is based on account *behavior* not the content of Tweets.” The company declined to elaborate further, but directed Vice to a May blog post detailing changes meant to combat “troll-like behaviors” and prioritize the visibility of “people contributing to the healthy conversation.”

“Just a few examples include if an account has not confirmed their email address, if the same person signs up for multiple accounts simultaneously, accounts that repeatedly Tweet and mention accounts that don’t follow them, or behavior that might indicate a coordinated attack,” the statement read. “We’re also looking at how accounts are connected to those that violate our rules and how they interact with each other.”

It’s unclear how most of these stated criteria would affect leading political figures and professionally-managed accounts, and how they would only apply to those of a single party. Notably, the post admitted that Twitter was applying these criteria to content that, on its own, “doesn’t violate our policies.”

Hot Air’s John Sexton pressed Twitter product lead Kayvon Beykpour on the matter, as well. Beykpour admitted that the number of affected accounts was “larger than the handful that have been mentioned,” but insisted they were “definitely not limited to a specific political affiliation.”

“I’m taking him at his word that some people on the left got caught up in this too (more false positives) but that doesn’t mean the impact is proportional by political affiliation,” Sexton wrote. “Based on what we’ve seen so far, it seems the impact is disproportionately falling on Republicans for some reason. Granted, the number involved is unknown, but obviously, if you expand the disparate impact to 10,000 users or a million, that’s a significant partisan advantage.”

Vice News followed up the next day by reporting that Twitter “appears to have adjusted its platform overnight to no longer limit the visibility of some prominent Republicans in its search results.” LifeSiteNews has since found that, as of Thursday morning, the named Republicans do appear in the drop-down search.

Twitter’s quick correction may have been partially meant to stop customer and investor dissatisfaction from getting worse; Bloomberg reports that “Twitter shares slipped 2.9 percent, to $42.93 in at 9:40 a.m. in New York, after falling as much as 3.8 percent Thursday.” Conservative actor James Woods called on every victim of shadow-banning to “sell all stock holdings in [Twitter]. Hit these creeps in their stock value. It’s the only way to fight this bias.”

This is far from the first allegation of political censorship to plague the social media platform.

Twitter insiders have been caught on video admitting that they shadow-ban conservative users, and have admitted to Congress to censoring hashtags of interest to conservatives during the 2016 election. The company has attempted to block a number of pro-life advertisements, allows left-wing groups such as the Anti-Defamation League (ADL) and pro-homosexual GLAAD to advise it on “trust and safety” issues, and enlists the anti-Christian group Southern Poverty Law Center (SPLC) to help weed out “hateful conduct and harassment.”