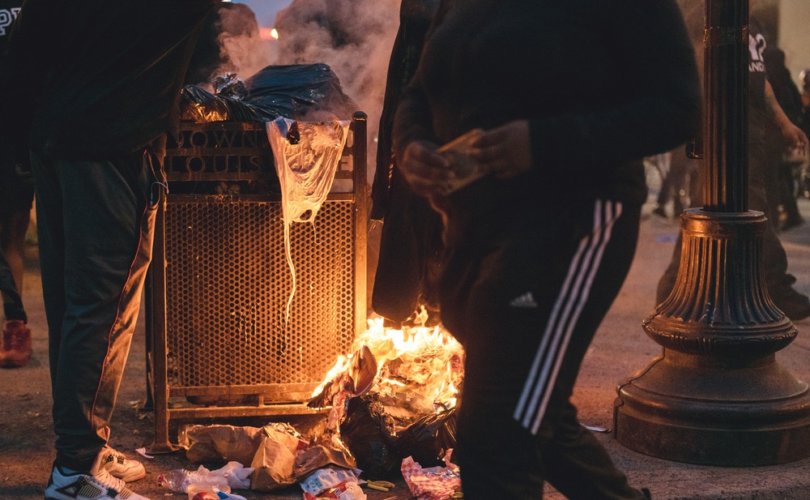 A garbage can surrounded by protesters burns near Jefferson Square Park on September 23, 2020 in Louisville, KentuckyJon Cherry / Getty Images

LOUISVILLE, Kentucky, September 26, 2020 (LifeSiteNews) – In an apparent conflict with Twitter’s terms of use, a spokesperson for the social media giant said that calls for violence in Louisville, Kentucky, do “not violate Twitter Rules.” Riots had broken out in the city when a grand jury decided on Wednesday not to pursue murder charges against three police officers involved in the shooting death of 26-year-old black woman Breonna Taylor.

The instruction “Burn Louisville” was apparently allowed to trend on Twitter, but the social media giant stated that such incendiary remarks do not violate their terms of use.

Breitbart reported that as early as September 22, a Twitter user calling himself Lee G News, posted a photo of two young people with their fists in the air and wearing masks reading “Breonna Taylor.” This was introduced with the caption “Louisville, KY will burn tonight!” The tweet was removed from Twitter but can be found archived here.

A spokesperson for Twitter told Breitbart that the tweet “does not violate Twitter Rules.” However, the Twitter Rules forbid threatening violence against groups of people, promoting terrorism, and “wishing or hoping that someone experiences physical harm”:

Abuse/harassment: You may not engage in the targeted harassment of someone, or incite other people to do so. This includes wishing or hoping that someone experiences physical harm. Learn more.

Dozens of other Twitter users posted messages expressing hope that arsonists would set fire to the Kentucky city both before and after the grand jury charged none of the police officers implicated in the shooting Breonna Taylor with murder, and only one office, Brett Hankison, with “wanton endangerment” for firing into a neighboring apartment.

When the grand jury’s decision was announced, the city of Louisville and Taylor’s family had already agreed to “a record-breaking $12 million settlement for her family that includes a host of police reforms,” according to Courier-Journal.

“With the exception of anything involving [the late resident] Mohammed Ali, burn Louisville to the ground,” a Twitter user calling himself Danny X posted.

A user calling herself Caley wrote, “I’m all for nonviolent protesting but burn Louisville to the ground. maybe then they’ll feel the ounce of pain the black community feels everyday.”

“Burn Louisville down along with that […] attorney general,” wrote a woman calling herself JaTeezy, referring to Kentucky’s Attorney General, Daniel Cameron, with a racial slight.

Some users protested the trend, pointing out that they themselves live in the city. One suggested that those outraged by the decision sign a petition instead.

The death of Breonna Taylor in March as part of a drug raid has become a symbol of police brutality to Black Lives Matter activists.

Fox News reported, “Taylor, a 26-year-old Black emergency medical worker, was shot five times by officers who entered her home using a no-knock warrant during a drug investigation March 13. State Attorney General Daniel Cameron clarified Wednesday that the officers did knock and announce themselves before entering. The use of no-knock warrants is now banned in the city. No drugs were found during the search.”

In anticipation of public outrage when the Grand Jury announced the charges, the City of Louisville declared a state of emergency before the rioting commenced, cancelling police officers’ leave and scheduling them for 12 hour shifts.

After the announcement was made at 1:15 PM EDT Wednesday, protests broke out across the United States. According to Louisville’s Courier-Journal, hundreds of people in that city began to march in protest. Some protesters chanted, “We didn’t get it: burn it down.” Some demonstrators attempted to bully spectators into joining in the march.

The violence of the demonstrations was not limited to threats. Two Louisville police officers were shot, traffic was impeded by barricades, multiple vehicles were vandalized, windows were broken, fires were set, and a total of 127 people were arrested.

A series of videos of the Louisville protests were uploaded to Twitter by the Daily Caller’s Shelby Talcott.

President Trump tweeted that he was praying for the wounded police officers.

“Praying for the two police officers that were shot tonight in Louisville, Kentucky,” he stated over Twitter.

“The Federal Government stands behind you and is ready to help. Spoke to [Kentucky governor] Andy Beshear and we are prepared to work together, immediately upon request!”

Calls for violence were also disseminated on Twitter after Trump announced his intention to nominate a successor to the late pro-abortion Supreme Court Justice Ruth Bader Ginsburg.

Former television host Reza Aslan, who worked with CNN and HBO, tweeted, “If they even TRY to replace RBG we burn the entire f—ing thing down.”