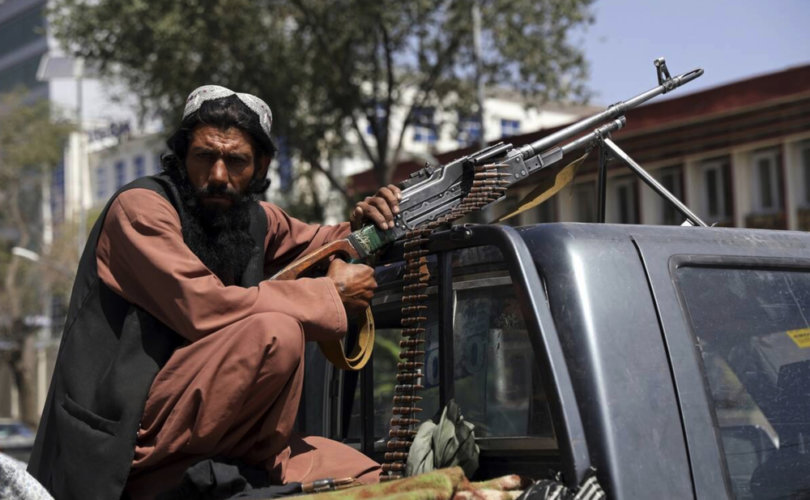 (LifeSiteNews) — Social media giant Twitter is facing growing criticism for its “double standard” in allowing the Taliban to use its platform while permanently banning the account of the duly elected former president of the United States and censoring conservative voices.

Piloted by CEO Jack Dorsey, Big Tech behemoth Twitter has refused to enact a sweeping ban on accounts created by members of the Taliban, a radical Islamic terror group, despite facing backlash for its allegedly selective censorship and failure to abide by its own “violent organizations policy.”

“This isn’t a difficult decision,” said George Farmer, CEO of “free speech platform” Parler in a statement this week. “Terrorists should not be given free rein on social media. It really is that simple.”

A spokesperson with Twitter, which banned Donald Trump while he was still the sitting president of the United States, told Forbes the big tech corporation “has ‘nothing to add’ on whether new action will be taken against Taliban accounts,” adding that “Twitter’s top priority is keeping people safe, and we remain vigilant.”

Renewed criticism of the tech giant comes after the Taliban took over Afghanistan at lightning speed this month during the chaotic pullout of U.S. troops from the region under the direction of the Biden administration, thrusting the middle-eastern country back into theocratic Islamic control under sharia law.

The Washington Examiner pointed out Thursday that “Taliban spokesman Zabihullah Mujahid, whose Twitter account has amassed some 287,000 followers, regularly provides updates on the Taliban’s seizure of the country,” while “Donald Trump was permanently suspended from the platform after the Jan. 6 riot.”

Taliban spokesman Zabihullah Mujahid, whose Twitter account has amassed some 287,000 followers, regularly provides updates on the Taliban’s seizure of the country.

Donald Trump was permanently suspended from the platform after the Jan. 6 riot.https://t.co/6OkxUD1GLc

Twitter’s policies claim “there is no place on Twitter for violent organizations, including terrorist organizations, violent extremist groups, or individuals who affiliate with and promote their illicit activities.”

“The violence that these groups engage in and/or promote jeopardizes the physical safety and well-being of those targeted,” the company claims.

Well known for acts of brutal violence, the Taliban reportedly executed 22 Afghan commandos last month as they were attempting to surrender.

Now NPR reports that “[t]housands of Afghan nationals who worked alongside the United States during the 20-year war in Afghanistan are in danger of being killed by the Taliban.”

As reported by Reuters, while the U.S. government lists the Pakistani Taliban as a foreign terrorist organization, it fails to do the same for the Afghan Taliban. Nonetheless, “Washington does sanction the group as a ‘Specially Designated Global Terrorist,’ which freezes the U.S. assets of those blacklisted and bars Americans from working with them.”

Meanwhile, U.S.-based global social media organizations signaled that they would permit the Taliban to take over the failed Afghan government’s public accounts, with Forbes reporting that Twitter and Facebook “won’t rule out allowing the Taliban to run those channels, which number more than two dozen across the two sites.”

In a statement criticizing Twitter for its alleged double standard, Parler issued a statement calling out the fellow social media platform for refusing to block the Taliban after its “brutal takeover of Afghanistan.”

“Twitter has shown its willingness to shut down major voices in America, including former President Donald Trump,” the statement read. “Yet, 11 days into the Taliban’s brutal takeover of Afghanistan, Taliban accounts remain active on the site. Twitter says it continues to monitor active Taliban accounts but has, thus far, resisted calls to institute a ban.”

Parler is calling on Twitter to ban Taliban accounts on its platform. pic.twitter.com/NCwv9esoEl

The “free speech” platform’s statement slammed Twitter for censoring and banning “conservatives in America” for “deviating from Twitter’s preferred narratives on everything from election integrity to the origins of COVID-19” while permitting the Taliban, which “doesn’t debate or discuss ideas,” to use its services.

Parler remarked that instead of engaging in discourse, the Taliban “executes those who disagree with its positions,” arguing “[t]his is hardly the kind of voice that should be able to recruit more radicals on social media.”

In an August 17 letter directed to Dorsey, Colorado Republican Congressman Doug Lamborn also accused the platform of “double standards and potential bias,” citing the company’s policy on violent organizations and arguing that “the Taliban is a violent organization and should fall under this category.”

“The Taliban are currently executing interpreters and other Afghans who helped the United States government,” Lamborn wrote, adding that “the Taliban’s strict interpretation of sharia law also poses a serious threat to women throughout Afghanistan as many are being forced into prostitution, and girls as young as 12 are being married against their will.”

Breaking 🚨 I sent a letter to @Jack over @Twitter‘s blatant speech bias & double standards. Why does Twitter allow two Taliban spokesmen to have a platform but restricts the First Amendment Rights of former President Trump? It’s past time to hold #BigTech accountable. #Taliban pic.twitter.com/6tylgmCBTz

Announcing its permanent suspension of then-sitting-President Donald Trump on January 8, 2021, Twitter claimed he ought to be banned “due to the risk of further incitement of violence,” the Christian Post reported.

“Our public interest framework exists to enable the public to hear from elected officials and world leaders directly,” the social media platform claimed, but added that “we made it clear going back years that these accounts are not above our rules entirely and cannot use Twitter to incite violence, among other things.”

In July, the censored former president filed a lawsuit against social media outlets that had suspended his accounts, including Twitter and Facebook, arguing that their actions violated his first amendment rights.