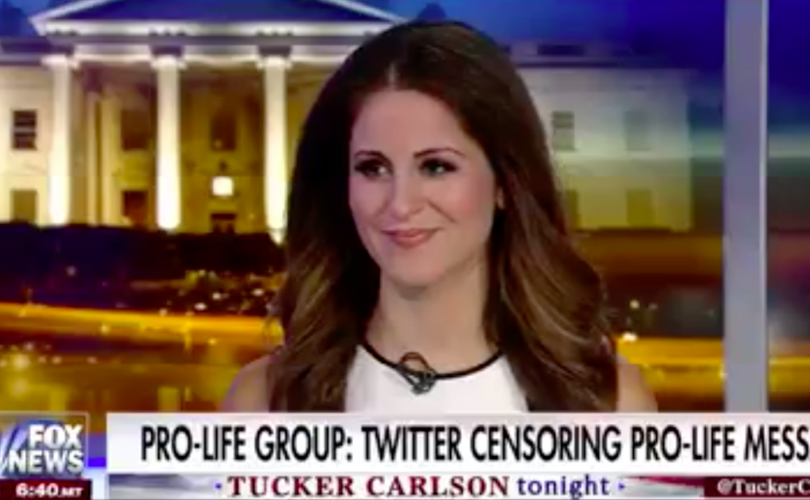 The nation’s largest abortion chain — the recipient of hundreds of millions of taxpayer dollars and the subject of an ongoing baby body parts trafficking scandal — is allowed to advertise on Twitter. But the social media platform has deemed Live Action’s content “inflammatory” and “offensive.”

“I think it’s clear that Twitter is discriminating against the pro-life voice,” the group’s president, Lila Rose, told Fox News’ Tucker Carlson. “Planned Parenthood is allowed to promote their pro-abortion and misleading messages, while Live Action is barred from promoting any content exposing abortion and Planned Parenthood.”

Twitter has blocked the group’s ability to advertise content until all the tweets it deems offensive are deleted. Live Action says these tweets mostly consist of any posts that offend Planned Parenthood.

“Planned Parenthood, the nation’s biggest abortion chain, is advertising on Twitter, but Live Action, which is the leading pro-life platform for the pro-life movement, is not allowed to,” Rose said. “And the kind of tweets that they’re flagging, Tucker – that they’re calling violation of their hate and sensitive policy – show ultrasound images, they’re fact-checks of Planned Parenthood, they’re discussing the prenatal life and its beauty. These are the sorts of tweets that Twitter is trying to block.”

Twitter has blocked Live Action’s ad buys for roughly a year, the pro-life group said, communicating via a Twitter-bot that the content was banned. But Twitter just recently told Live Action that it would have to delete almost all of its tweets, as well as delete its website and create a new one in order to be able to do business on Twitter.

Twitter responded to Carlson’s request for comment on the matter with a statement that said: “Twitter has clear, transparent rules that every advertiser is required to follow, and the political viewpoints of an organization do not impact how these rules are applied.”

Rose pointed out that it took more than a year for Twitter to finally identify the problem it had with Live Action’s ad content.

Social media is critical of the pro-life movement because the institutional media will not cover the pro-life issue objectively if it does so at all.

Live Action has the largest social media presence in the pro-life movement, the group said, with a Facebook following of almost two million people and more than 165,000 combined followers on Twitter.

“We use social media as our primary channel to inform and educate Americans on the rights of the preborn and to expose the horrific human rights abuse of abortion,” a Live Action statement said. “These channels are an integral part in changing hearts and minds on abortion and changing the culture for life.”

“Twitter has effectively limited speech on the side of the issue it apparently rejects,” it said. “This is disturbing behavior for a social media platform that has over 300 million active users a month and that presents itself as a forum for people to voice a variety of opinions and positions.”

Twitter is not the only social media platform acting to suppress the facts about Planned Parenthood. YouTube labels some of Live Action’s videos with “content warnings”.

When a user tries to view the video but is not logged in to YouTube, they get a message saying the material may be “inappropriate.”

On its site, Live Action shows the example of one such video with a content warning. It has no graphic content; it shows actual statements from Planned Parenthood staff giving a woman false information about the science of fetal development.

Below the example, Love Action states, “It seems too many social media companies consider messages that do not support Planned Parenthood ‘inappropriate.’”