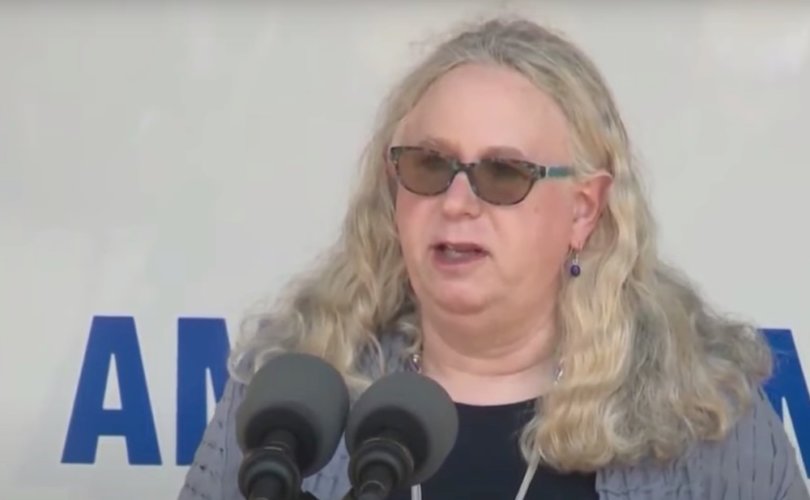 Levine, the “transgender” Assistant Health & Human Services (HHS) Secretary, was promoted to the rank of four-star admiral in the U.S. Public Health Service Commissioned Corps (PHSCC) last week, sparking various adoring headlines in the mainstream press about the “historic” nature of the promotion.

“The title of first female four-star officer gets taken by a man,” Banks lamented in a tweet, for which Twitter suspended him for allegedly violating its “Hateful Conduct Policy’s” prohibition on “targeted misgendering” of “transgender individuals.” That tweet has since been removed; another tweet by Banks expressing similar sentiments remains live:

Calling someone that was born and lived as a man for 54 years the first "female" four-star officer is an insult to every little girl who dreams of breaking glass ceilings one day. https://t.co/bHKmJbE6cA

“My tweet was a statement of fact,” Banks said Saturday. “Big Tech doesn’t have to agree with me, but they shouldn’t be able to cancel me. If they silence me, they will silence you. We can’t allow Big Tech to prevent us from telling the truth. When Republicans take back the House next year, we must restore honesty to our public forums and hold Big Tech accountable.”

Banks’ personal Twitter account remains active; he says he will be using it in place of his official one to communicate until further notice.

I won’t back down.

I’ll be posting on my personal account for the time being.

Big Tech must be held accountable!

Several GOP lawmakers spoke out in defense of Banks and against Twitter’s actions, in the process noting the social media giant’s double standards:

Twitter is fine with hosting the Mullahs in Iran. The Taliban? No problem.

Remember this day when we end Big Tech’s silencing and censorship of conservatives.

Twitter is censoring @RepJimBanks for refusing to go along with the Biden administration’s performance theater. @Jim_Banks