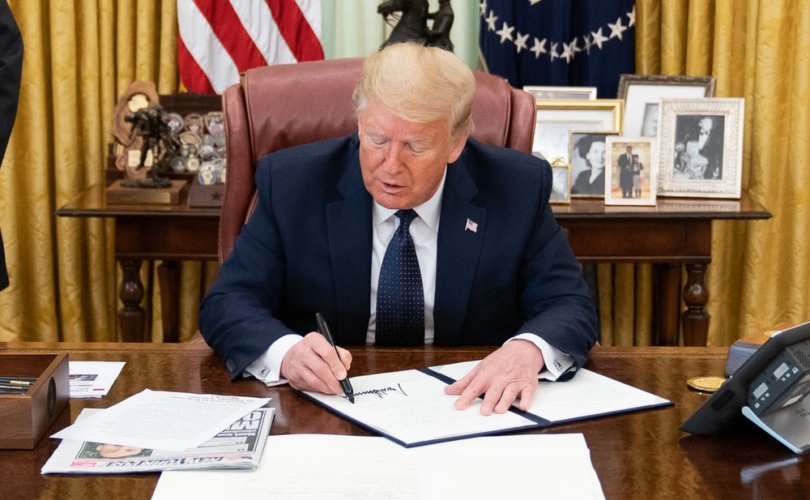 May 29, 2020  (LifeSiteNews) — Twitter has censored a new post by President Donald Trump within 24 hours of him signing an executive order to combat social media censorship.

The social media giant covered a tweet published by Trump earlier today with the words: “This Tweet violated the Twitter Rules about glorifying violence. However, Twitter has determined that it may be in the public’s interest for the Tweet to remain accessible.”

Trump’s censored post was responding to the ongoing riots in Minneapolis, warning that the military will assume control of the city if local authorities cannot address the situation.

….These THUGS are dishonoring the memory of George Floyd, and I won’t let that happen. Just spoke to Governor Tim Walz and told him that the Military is with him all the way. Any difficulty and we will assume control but, when the looting starts, the shooting starts. Thank you!

The president faced wide criticism after the tweet because it seemed to indicate the military would open fire on rioters. In a follow up tweet, he claimed that is not what he meant:

….It was spoken as a fact, not as a statement. It’s very simple, nobody should have any problem with this other than the haters, and those looking to cause trouble on social media. Honor the memory of George Floyd!

“Twitter is doing nothing about all of the lies & propaganda being put out by China or the Radical Left Democrat Party. They have targeted Republicans, Conservatives & the President of the United States. Section 230 should be revoked by Congress. Until then, it will be regulated!” Trump posted earlier today.

“If we just wait around, big tech will steal this election from Donald Trump and the American people,” Gaetz said.

“I will be filing a complaint with the Federal Election Commission tomorrow because of what they’ve done to President Trump. As a voter I have the standing to do it. And President Trump should call for a decision on the Federal Election Commission questions that are before them so that these tech companies get flushed out of the bushes,” Gaetz continued.

Gaetz announced on his regular podcast earlier this week that he is working on legislation that would remove Section 230’s legal immunity that social media companies currently enjoy,

“I am currently working with my Republican colleagues on the Judiciary Committee to craft legislation to say that if you’re going to opine as to the truth or falsity of that which is put on your platform, for the sake of its viewers, you don’t get the protection of Section 230. You are not a platform. You are doing something else, you are editorializing,” Gaetz told his listeners.