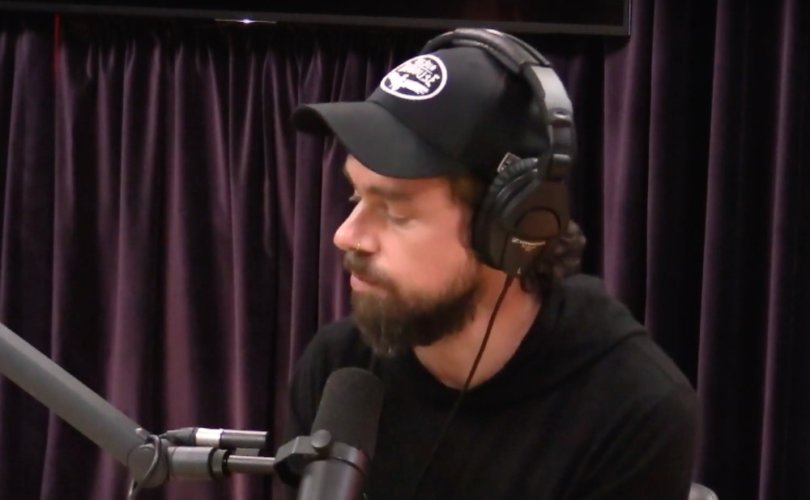 March 7, 2019 (LifeSiteNews) — Twitter CEO Jack Dorsey faced what may be his most intense grilling yet over the social media giant’s ongoing censorship battles Tuesday, during a more than three-hour interview with podcaster Joe Rogan.

Dorsey appeared alongside Twitter Legal, Policy, and Trust & Safety Lead Vijaya Gadde and independent journalist Tim Pool, who was responsible for the bulk of the scrutiny.

In one exchange highlighted by Fox News, Dorsey and Gadde addressed the recent controversy over users being banned for taunting journalists to “learn to code,” advice some in the media gave to coal workers laid off during the Obama years, which media critics turned back at them in response to recent stories about media layoffs. They said “thousands and thousands” of such messages had been aimed at relatively few journalists, many allegedly from dubious accounts.

“Where we draw a line is when people use their voice and their platform to use their voice to silence someone else on the platform,” Gadde claimed, insisting it’s “rare for us to outright ban someone without warning.” However, Dorsey also admitted that “we were probably way too aggressive when we first saw this, as well.”

Throughout the interview, Pool aggressively pressed Dorsey and Gadde on Twitter’s policies and how consistently it applies them, with several of the most significant moments compiled by Breitbart.

“You’ve now got a platform that’s so powerful in our American discourse that foreign governments are using it as weapons against us,” he asserted, a particularly notable observation in light of the fact that foreign interference in the 2016 election was the original stated justification for tech companies’ more active scrutiny of content on their platforms. “You have rules which go beyond the scope of the U.S. which will restrict American citizens from being able to participate. Meanwhile, foreign actors are free to do so as long as they play by your rules.”

.@Timcast brilliantly demonstrating what smart accountability journalism looks like in his questioning of @Twitter's @jack and @vijaya on @joerogan right now on https://t.co/4TlfHNWou4 pic.twitter.com/VmOgqm6uRW

“So our elections are being threatened by the fact that — if there’s an American citizen that says I don’t believe in your ‘misgendering’ policy and you ban them, that person has been removed from public discourse on Twitter,” Pool continued. Last month, Dorsey cited Twitter’s policy of banning users for referring to a gender-confused person by his biological sex rather than whatever he “identifies” as as an example of “protecting” users. Canadian feminist writer Meghan Murphy is currently suing Twitter for banning her after she tweeted that “women aren’t men.”

“So you have an argument between two people, and you have a rule that enforces only one side of the ideology, and you’ve banned only one of those people,” he said, to which Gadde responded that “we have a rule that attempts to address what we perceive to be instances of abuse or harassment.”

Gadde agreed, but claimed, “It’s not that you can’t have those viewpoints; it’s that if you’re taking those viewpoints and you’re targeting them at a specific person in a way that reflects your intent to abuse or harass them.”

“What if it’s in the context of the conversation?” Rogan asked. “What if she’s saying, ‘I don’t think that trans women should be allowed in these female spaces to make decisions for women,’ and then this person’s arguing and she says, ‘a woman is biologically female, you are never going to be a woman’?”

“She [Murphy] responded with ‘men aren’t women, though,’ and that was the first in the series of events, that’s what got her the suspension and the warning,” Pool interjected. Gadde insisted that that tweet was only part of the context and “actually the second strike,” to which Pool and Rogan both asked, “Why is that a strike?”

“I don’t have all the tweets in front of me, they were like ten or twelve tweets going back and forth,” she said, “and my understanding is that in the context of all of those she was misgendering a particular person, not that she was holding a belief or statement.”

Unconvinced, Rogan reiterated that the correctness of Murphy’s tweet was the heart of the debate, and Pool summarized, “You were having an individual who was debating a high-profile individual in her community, and she was expressing her ideology versus hers, and you have opted to ban one of those ideologies.”

Pool also noted that Twitter banned conservative Jacob Wohl after he admitted to having created multiple fake accounts but questioned why it hadn’t banned a left-wing activist named Jonathan Morgan for similar offenses.

“I don’t know who that is,” Gadde answered, which Pool suggested was alarming in and of itself.

“One of the issues that I think it’s really important to get to is, you should know who he is. He’s more important than Jacob Wohl is but for some reason you know about this conservative guy but not the Democrat who helped meddle in the Alabama election,” Pool said. “It was recently reported and covered by numerous outlets that a group called New Knowledge was meddling in the Alabama election by creating fake Russian accounts to manipulate national media into believing that Roy Moore was propped up by the Russians. Facebook banned him as well as four other people but Twitter didn’t, he’s still active.”

Pool and Rogan also questioned why Twitter took action against center-right figures and group such as conspiracy theorist Alex Jones, provocateur Milo Yiannopoulos, blogger Charles Johnson, and Gavin McInnes’s group the Proud Boys but not various prominent liberals who threatened violence against the Covington Catholic students at the March for Life, or violent left-wing organizations such as Antifa.

“Twitter permanently excised accounts associated with the Proud Boys. Antifa accounts who have broken the accounts rules repeatedly, branded known cells which have been involved in violence, all still active. Is there a reason?” Pool asked. Gadde tried to suggest that the FBI had designated the Proud Boys as an extremist group, which Pool and Rogan quickly disputed and which the FBI debunked in December.

“So then you have the Antifa groups that are engaging in the same thing, y’know the famous bike lock basher incident where a guy showed up, hit seven people over the head with a bike lock,” Pool continued. “You have other groups like By Any Means Neccessary, you have in Portland for instance there are specific branded factions.” Pool also cited an Antifa account that leaked the home addresses of Immigration & Customs Enforcement agents.

Pool contended that Twitter has established a pattern in which “the guy who calls for death gets a suspension,” whereas “the guy who insinuates death gets a permanent ban[.] … And you have a pattern and practice of banning only one faction of people.” Dorsey denied allegations of partisan or ideological bias, insisting that instances of inaction against left-wing violence are merely “mistakes.”

Conservative distrust of Twitter is fueled by a long series of bans and suspensions (including of LifeSiteNews) to affect non-violent, non-obscene content from a right-of-center perspective, as well as Twitter insiders having admitted to intentionally targeting conservative accounts and topics, as well as excluding various prominent Republicans from its drop-down search menu.