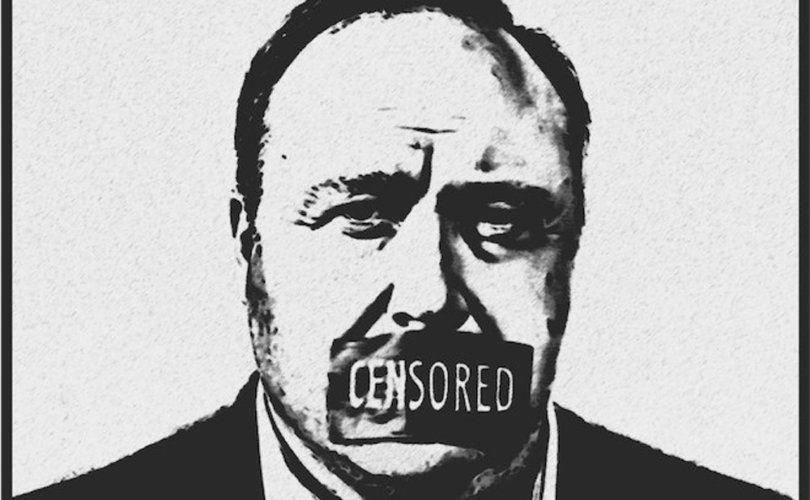 Alex Jones tweeted out this image August 8 in protest of social media banning his accounts.

August 8, 2018 (LifeSiteNews) – Twitter will not be among the social media platforms blocking conspiracy theorist Alex Jones, according to CEO Jack Dorsey.

Facebook, YouTube, Apple, and Spotify all banned the page, channel, and podcasts of the host’s InfoWars platform from their services earlier this week, citing Jones for “hate speech.” For years Jones has been little more than a curiosity outside of his fan base, but in recent years he has been the subject of more mainstream attention due to a defamation lawsuit by the families of Sandy Hook shooting victims and his perceived closeness to President Donald Trump.

Many conservatives raised eyebrows at the rapid succession of the bans, speculating they were part of a coordinated campaign. But Twitter’s Dorsey has no intentions of joining it, the Washington Times reports.

“We didn’t suspend Alex Jones or Infowars yesterday. We know that’s hard for many but the reason is simple: he hasn’t violated our rules,” Dorsey explained Tuesday. “We’ll enforce if he does. And we’ll continue to promote a healthy conversational environment by ensuring tweets aren’t artificially amplified.”

The Twitter chief continued that while he considers Jones a purveyor of “unsubstantiated rumors,” the only result of “succumb[ing] and simply react[ing] to outside pressure” and banning voices like his entirely would simply give “fuel to new conspiracy theories.” Instead, he argued that the solution to fake news on social media is for journalists to “document, validate, and refute such information directly so people can form their own opinions.”

Conservative commentator Ben Shapiro, a fierce critic of Jones, echoed the sentiments of many mainstream conservatives on Monday when he argued that most tech companies were setting a dangerous precedent that would extend far beyond Jones himself.

“Much of what Jones and his employees say is absolutely rotten pig excrement, but there’s no definition of hate speech that has a limiting principle,” he wrote. “Is it ‘using dehumanizing language to describe people who are transgender’ to state that transgender people suffer from a mental disorder? Or that they are not in fact members of the gender to which they claim membership? What constitutes ‘hate speech’ when discussing the relationship between radical Islam and terrorism? None of this has been made clear.”

As if to unintentionally reinforce Shapiro’s point, Sen. Chris Murphy, D-CT, took to Twitter to not only celebrate Jones’ ban, but to argue that InfoWars was merely the “tip of a giant iceberg” and social media companies “must do more than take down one website.”

Despite Dorsey’s stand against censorship in this case, many conservatives doubt the depth or sincerity of his commitment to an uninhibited exchange of ideas.

Twitter insiders have previously admitted to shadow-banning conservative users and censoring hashtags of interest to conservatives during the 2016 election. The company has attempted to block several pro-life ads, allows left-wing groups such as the pro-homosexual GLAAD to advise it on “trust and safety” issues, and enlists the anti-Christian group Southern Poverty Law Center (SPLC) to help weed out “hateful conduct and harassment.”

Most recently, the platform came under fire for temporarily excluding several prominent Republicans from its drop-down search bar, a supposed technical error that did not apply to their Democrat counterparts. Twitter received widespread mockery for its explanation of the incident, which claimed “We do not shadow ban” while admitting users “may have to do more work to find” accounts flagged by Twitter’s algorithm.