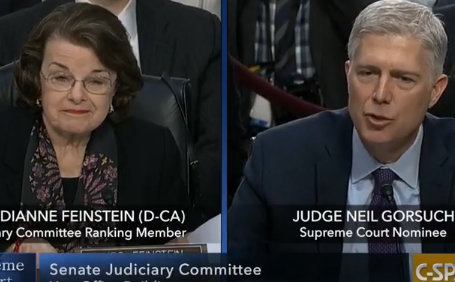 Throughout day two of his confirmation hearing, Gorsuch repeatedly refused to make “campaign promises” about which cases he would support and which he wouldn't, saying judges shouldn't be like politicians. He indicated there are a number of factors that go into analyzing precedent.

“Do you view Roe has having super precedent?” asked Feinstein.

Roe v. Wade “has been reaffirmed many times. I can say that, yes,” said Gorsuch.

Earlier in the hearing, he said of Roe v. Wade, “A good judge will consider it as precedent of the United States Supreme Court worthy as treatment of precedent like any other.”

Conservatives on Twitter pointed out that “super precedent” isn't a real legal term – and precedents have been unjust before.

By Diane Feinstein's logic, Dred Scott would have been a super-precedent, just like Roe.

What I want to know is how the Constitution can be malleable and yet Roe be “super-precedent,” an inviolable and un-changeable principle.

W/all due respect @SenFeinstein there's no such thing as “super precedent.” You can trust me on this; I used to be a judge #GorsuchHearing

Feinstein suggested on Monday that Gorsuch shouldn't be confirmed because of his belief that “the intentional taking of a human life by private persons is always wrong.”