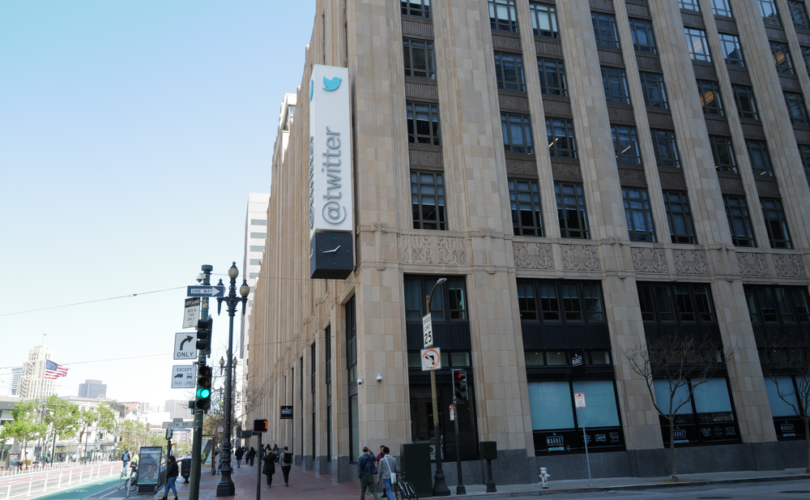 (LifeSiteNews) — Investigative journalism outlet Project Veritas released secretly recorded footage of a senior engineer at Twitter saying the company is “commie as f***” and that staff selectively “censor” those on the political right.

“Our jobs are at stake — [Elon Musk is] a capitalist, and we weren’t really operating as capitalists, more like very socialist,” Murugesan continued, adding that Twitter’s staff is “commie as f***” and many have threatened to quit if Musk’s deal to become the owner of the social media platform goes through.

Continuing, Murugesan was recorded saying that many of his “colleagues are like super left, left, left, left, left” politically, and he is unsure “that the two [political] parties can truly coexist on one platform” in the way Musk has made clear is his goal with the company.

Asked “how Twitter does not believe in free speech?” Murugesan replied by saying that “Twitter wants to censor ‘bullying and harassment’ and the idea of free speech is that you can ‘bully’ and ‘harass’ people.”

Getting into specifics, Murugesan used the example of Twitter’s censorship of those deviating from the transgender narrative, and how Twitter’s left-wing “bias” causes them to censor those opposed to the transgender agenda, which is typically those on the political right.

“It’s true. There is a bias. It is what it is today,” the employee remarked.

Murugesan did say that while many of his colleagues have said they will quit the moment Musk becomes their boss, he himself is “OK with it” and he only “became left” politically after he started working for Twitter and was immersed in the heavily left-wing environment.

“I think it’s just like the environment, like you’re there and you become like this commie, they call it Commifornia … ” explained Murugesan, adding that due to this left-wing outlook, Twitter employees did all they could to “revolt” against Musk buying the company, ultimately to no avail.

“[The Board of Directors] literally couldn’t make any other choice,” Murugesan said about the board’s decision to accept Musk’s buyout.

“Cause if they had denied the offer from Elon, shareholders could have filed a lawsuit against them and depleted them of their wealth, personally,” the engineer said.

According to Murugesan, even the interior operation and workplace style of Twitter is communist in nature, with employees prioritizing their “mental health” over the financial success of the company.

Murugesan said that employees are free to take as much time off as they want, and that he himself only “worked four hours a week last quarter.”

The lack of work ethic currently displayed at Twitter is one of the topics Musk himself has addressed on the platform, saying that “work ethic expectations would be extreme,” but would still be “much less” than he demands of himself.

While Musk’s offer to buy Twitter was initially accepted by the company’s board, the transaction is reportedly “on hold” as Musk has accused the company of fraudulently evaluating the enterprise, making him feel as though his $44 billion dollar proposal was too high a figure.