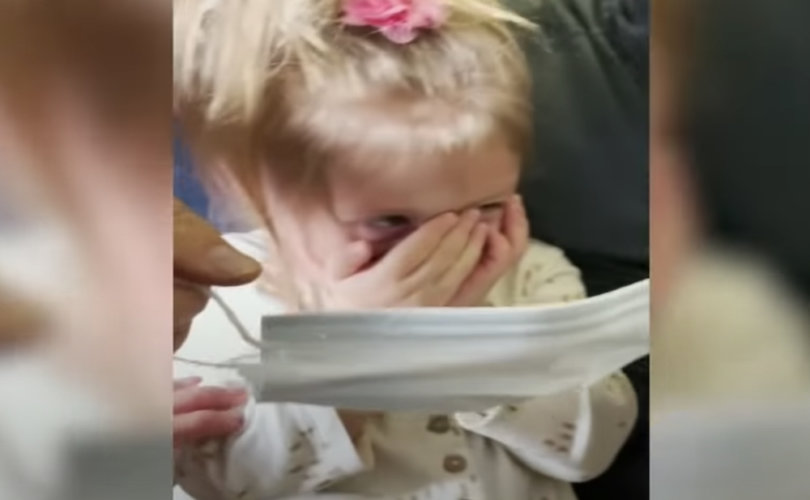 December 18, 2020 (LifeSiteNews) – In the latest example of Big Tech attempting to control the public discourse over COVID-19 measures, Twitter and Instagram removed a viral video exposing United Airlines’ treatment of a family whose two-year-old child refused to wear a mask.

The Federalist reported that Eliz Orban, her husband, and their two-year-old daughter were planning to fly from Denver to New York to see the Rockefeller Center Christmas tree and to visit family in New Jersey but were forced off the plane before their flight because their frightened child would not wear a mask.

The video, which has been removed from the two social media platforms, shows the father attempting to comply as the crying child cries and puts her hands over her face. A flight attendant demands they “grab their belongings and exit the aircraft,” while the father protests “this is compliance” and attempts to comply by holding the mask over her face.

The couple added that they had flown several times during the pandemic without incident, but this time they were banned from United and forced to leave without their baggage, which made the trip to New York (flight attendants did retrieve their child car seat). United policy requires masks for all passengers over age two.

“The health and safety of our employees and customers is our highest priority, which is why we have a multi-layered set of policies, including mandating that everyone onboard two and older wears a mask,” United responded in a statement to TMZ. “We are investigating this specific incident and have made contact with the family. We also refunded their tickets and returned their car seat and bags.” TMZ added that its sources deny the family was banned from future flights with the airline.

As extensively argued in the debate over reopening schools, evidence from the United States and abroad suggests that children are a very low risk of either suffering from COVID-19 or passing it along to others. Yet many on the political left disagree, and social media giants have taken it upon themselves to act as arbiters for “authoritative” COVID-19 information, which primarily takes the form of deference to Democrat narratives about the pandemic and the government response, as well as taking the positions of the pro-China World Health Organization as authoritative.