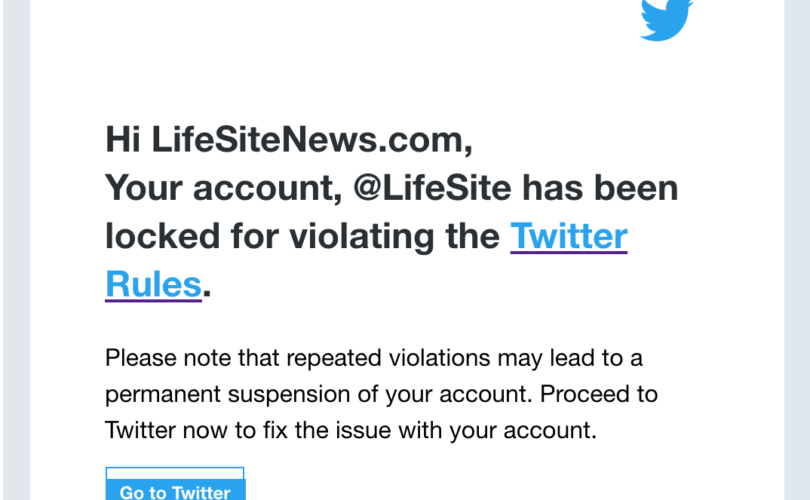 December 9, 2019 (LifeSiteNews) – When almost all mainstream media are currently promoting a false and dangerous agenda, there is a desperate need for an always reliable alternative.

That is exactly why LifeSiteNews exists.

Unfortunately, we have not only experienced significant censorship from social media and heightened attacks on freedom of the press this year.

Late last night we found out LifeSite's Twitter account was locked after we tweeted about transgender activist Jonathan Yaniv. Earlier this year we fought Apple News, and thanks to your support, were reinstated on the platform after our channel was shut down. Facebook also censored and blocked us for our conservative content.

The attacks on our freedom of the press were another obstacle we faced in getting our voice heard this year.

When James Younger was faced with being “transitioned” to a girl by his mother, and his father's parental rights were being stripped away – as we have related, LifeSite went a huge extra mile to ensure their story was told.

James’s father did all he could to save his son in the courtroom, but he faced a Judge who didn’t want this case to get any attention from the press, and certainly not from readers like you.

Our reporter, Madeleine Jacob, was in the courtroom everyday getting the facts on this horrible development straight from the source. The story eventually went viral.

On the crucial day when the Judge was set to make her final ruling, Madeleine and other independent media sources, without valid reasons given, were suddenly denied access into the courtroom.

We were stunned. Only a few selected mainstream media with a particular type of press pass were allowed to enter that day. All the other days, anyone was permitted to witness the proceedings, as is normal for almost all court cases. This denial was a direct violation of our 1st amendment right to freedom of the press.

This is the reality of the discriminatory, judicial activist culture we live in today.

Because of our increasing influence that allow the public to bypass the controlled mainstream media, we are now seeing judges, politicians, and big tech organizations doing all they can to try to block our reporting from reaching the wider public.

Our most important freedoms are being challenged. It is a daunting battle trying to overcome this every day. Yet, you have the power to make a difference and help LifeSite withstand these unethical attacks on your freedom to read press reports that provide a much needed alternative to the mainstream agenda.

Help us withstand these attacks and become a supporter of our mission today.

While we were covering the hugely significant David Daleiden criminal case, LifeSite was specifically named in a request to gag any information about testimony during that trial. They certainly didn’t want any of those horrendous testimonies to reach the public.

The State of California argued it was putting the abortionists and other testifiers at risk by publishing their testimony as it could expose their identity.

What was the State really afraid of? The truth.

David and his fellow pro-life investigative journalists were up against Goliath in this case and the media wanted to shut us out. Without LifeSite, David and the Center for Medical Progress would have, just as James and his father, also lost their voice as we were the only news agency daily present at this historic trial.

Everyday life and family advocates are increasingly being censored, silenced, and misrepresented.

Life and family advocates, parents, and children are heavily relying on us to be their voice, and now our ability to do just that is under attack.

If you and your family value receiving news on life, family and faith issues that you simply cannot find anywhere else, I hope you will consider LifeSiteNews in your year-end giving.

Thanks to the generosity of the LifeSite giving family, our journalists have covered many stories this year that likely would have otherwise gone unnoticed or would have been misreported. In fact, our reports reached millions.

Our in depth, on-site reporting on The Centre for Medical Progress, James Younger, and the Amazon Synod, to name only the most prominent stories, ensured the world heard the truth – presented professionally and accurately.

We need you to help our voice be louder than ever because this past year we have had a record number of people contacting us to report on their stories.

We can’t keep up with all those requests and desperately need more staff and support services to properly respond to these pleas for help.

Please make LifeSite a priority organization for your end of year giving.

In return, we promise to use your donation in the most effective and responsible manner for life, family, faith and freedom.