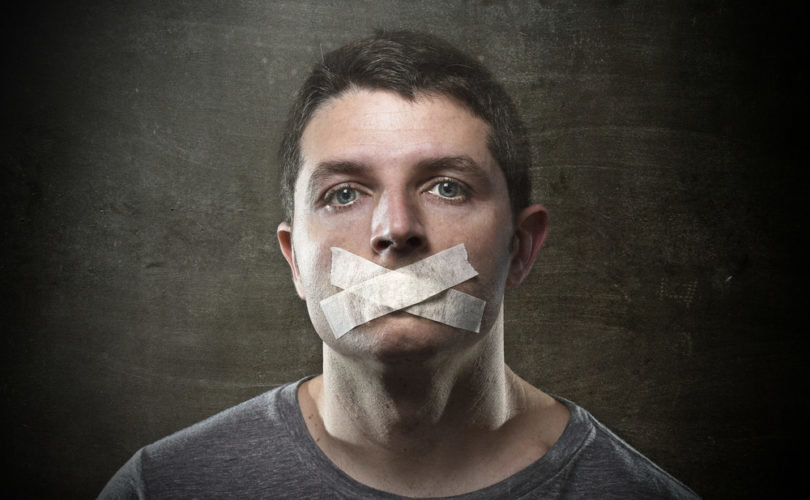 March 11, 2019 (LifeSiteNews) — Social media giant Twitter has once again suspended a user simply for referring to a male who “identifies” as female by his biological sex.

Anthony Halliday, better known online as Stephanie Hayden, is a transgender activist who last December reported Kate Scottow of Humberside, England to police for “defamation” because she asserted in a Twitter exchange that he is still a man. Police went to Scottow’s home, arrested her in front of her three children, and took her to the station, where she was detained for seven hours, photographed, and fingerprinted. She also had her DNA taken and ultimately was given a court order barring her from referring to Halliday as male.

Over the weekend, Nicolas Carnogursky contacted LifeSiteNews to share that he was “inspired by” LifeSite’s coverage of the incident to send Halliday a tweet of his own Thursday, declaring simply, “You’re a man.” As a result, “Twitter blocked me within minutes” and “will not reinstate my account until I remove the tweet, which I am not going to do.” He says he believes that his account was locked within five minutes.

Carnogursky’s most recent published tweet was on Thursday, March 7, and he provided the following screenshot of Twitter’s notification, which accuses him of “violating our rules against hateful conduct.” Calling Halliday a man, the social media giant claims, constitutes “harass[ment]” on the basis of “gender identity.”

Last month, Twitter CEO Jack Dorsey cited the company’s relatively new crackdown on “misgendering” or “deadnaming” (addressing someone by his original legal name that matches his biology) users as an example of “protecting” users. Canadian feminist writer Meghan Murphy is currently suing Twitter for banning her after she tweeted that “women aren’t men.”

The policy was also one of the points of contention last week in a lengthy interview on the Joe Rogan Experience podcast, during which Rogan and journalist Tim Pool confronted Dorsey and Twitter legal, policy, and trust & safety lead Vijaya Gadde.

“What if it’s in the context of the conversation?” Rogan questioned. “What if she’s saying, ‘I don’t think that trans women should be allowed in these female spaces to make decisions for women,’ and then this person’s arguing and she says, ‘a woman is biologically female, you are never going to be a woman’?” Pool faulted Twitter for, in “an argument between two people,” having “a rule that enforces only one side of the ideology, and you’ve banned only one of those people.”

Conservative distrust of Twitter is fueled by a long series of bans and suspensions (including of LifeSiteNews) to affect non-violent, non-obscene content from right-of-center perspectives and Twitter insiders having admitted to intentionally targeting conservative accounts and topics. The platform also excludes various prominent Republicans from its drop-down search menu and appears to hold left-wing public figures to more permissive standards.