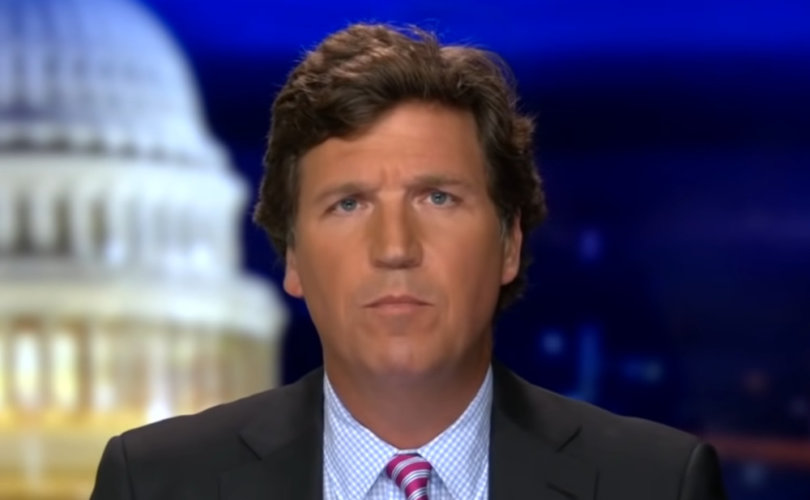 The tweet in question showed screenshots of lock-out notices for Christian satire news site The Babylon Bee and Turning Point USA founder Charlie Kirk for pointing out that Assistant Secretary of Health for the Department of Health and Human Services (DHH) Rachel Levine, whose birth name is Richard, is a man. The caption of the tweet read “But wait. Both of these tweets are true.”

Tucker responded to Twitter’s decision on his FOX show Wednesday, saying “The point of the trans movement isn’t to convince anyone if biology isn’t real. They’re not even trying. That’s an impossible case to make … The point of this exercise is very different. The point is to make the rest of us repeat a lie … to say something we know perfectly well is not true.”

“[T]his isn’t about trans people,” Carlson said. “It’s about all of us, and the stakes are very high. And that’s why the censorship is so intense, have you noticed?”

He continued: “Their first move always is censorship, and the second move inevitably is punishment. We learned that again last night when we were suspended from Twitter.”

Twitter locked the account of The Babylon Bee on Sunday for calling Levine “Man of the Year” as a joke, reacting to USA Today’s naming Levine “Woman of the Year.” Babylon Bee CEO Seth Dillon also announced Wednesday that Babylon Bee founder Adam Ford had been locked out of his personal account.

The Babylon Bee’s founder @Adam4d has been locked out of Twitter for hateful conduct. pic.twitter.com/QHDXBrAmws

Kirk was censored for a tweet that said “Rachel Levine spent 54 years of his life as a man. He had a wife and family. He ‘transitioned’ to being a woman in 2011. Joe Biden appointed Levine to be a 4-Star Admiral, and now USA Today has named ‘Rachel’ Levine as a ‘Woman of the Year’ … Where are the feminists?”

This is not the first time Twitter has censored users for refering to Levine’s masculinity. Last October, Twitter suspended Indiana Republican Congressman Jim Banks’ account for calling Levine a man. Twitter also suspended LifeSiteNews from two Twitter accounts in January 2021 for referring to Levine as a man.