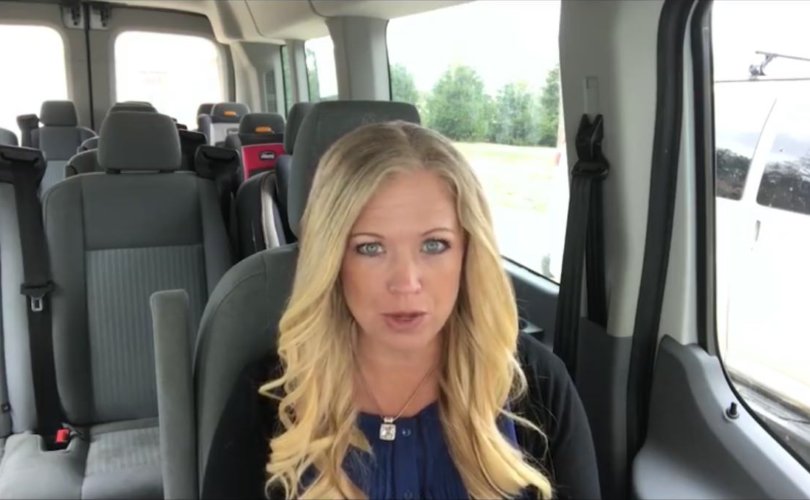 Johnston’s “Activist Mommy” Twitter account was shut down August 31, with the demand that she take down two tweets in which she tangled with Phillip Picardi, a homosexual activist and digital editor of Teen Vogue and Allure magazines. She removed the tweets and is back on Twitter.

This story is sprouting wings! Thanks @MeganFoxWriter and @DRUDGE_REPORT! Content discrimination is alive & well! https://t.co/K7xfdvI2KY

Johnston’s banned tweets were responding to an August 16 tweet by Picardi in which he said he was “Honored to be named to @TheAdvocateMag's 50 Most Influential LGBTQ People in Media.” The Advocate is the nation’s oldest and largest publication for homosexuals, according to Wikipedia.

On June 27, the same LGBT magazine published an incendiary article attacking Elizabeth Johnston and her husband, Dr. Patrick Johnston. It contained numerous falsehoods and distortions, including that the Johnstons support the death penalty for homosexuality, favor arresting “gay” activist leaders, and believe that a man should be allowed to rape his spouse.

Johnston ripped into the Advocate “hit piece” on her Activist Mommy website and challenged its many inaccuracies in a July 5 letter to Advocate editor Lucas Grindley. That led to the magazine publishing both a “Correction” and a “Clarification” at the end of its screed blasting Johnston and conservative women. It also published an “Editor’s Note” pointing out that in her response, Johnston said, “The LGBT gestapo is the most intolerant and hateful 'community' in our country.”

But rather than deal with its extreme and crude content, which outraged mothers worldwide, Picardi tweeted that the backlash to the article was “rooted in homophobia,” a familiar mantra of LGBT activists.

In one of her banned August 16 tweets, Johnston said, linking to Picardi’s tweet about his “Top 50” recognition: “Congrats, Phillip! A sodomite mag just awarded you for teaching kids sodomy. Way to recruit there @TheAdvocateMag! #PullTeenVogue @pfpicardi.”

In Johnston’s other banned tweet, she said, “@TheAdvocateMag just looooves that @pfpicardi recruits teens to sodomize each other [&] join the ranks of their LGBT readers! Perfect union.”

Soon the “Activist Mommy” of 10 received a notice from Twitter informing her that her account had been locked and that to unlock it she needed to remove the tweets that violate Twitter's rules, which prohibit:

— “disclosing other users' private information; and

— “violating our other rules”

Johnston deleted the two tweets and 12 hours after the initial Twitter suspension notice her account was restored.

This is hardly the first time that Johnston has battled against politically correct, tech-giant censorship. In February, Facebook froze her “Activist Mommy” account after she used Old Testament and New Testament verses to show that the Bible condemns homosexuality. As LifeSiteNews reported, “once she was unfrozen, she complained about censorship and restored the original blog. Facebook removed it again. She was frozen for another seven days and cut off from her 70,000 followers.”

The story of Facebook’s “Big Brother” meddling with “Activist Mommy” went viral and was widely covered by conservative media, causing Facebook to issue a rare apology to Johnston, which she called insincere. And like Twitter’s, Facebook’s clumsy “content discrimination” (as Johnston calls it) only made her more popular: the “Activist Mommy” Facebook page now has more than 277,000 followers.

In an interview with LifeSiteNews, Johnson recognized the importance of conservatives ultimately acquiring their own social media platforms to avoid the leftist “tech censorship” that plagues the Right. She decried the “monopoly” that “Silicon Valley leftists” hold over social media and said it would be wonderful if conservatives could build competitive platforms where she and fellow conservatives would not have to deal with the ongoing intolerance of self-styled “progressives” — especially the threat of being blocked.

But for now, she said, it is important for Christians and social conservatives to remain on platforms like Twitter and Facebook to “expose the liberals’ bias” and to “push back harder when they push back against us.”

“We could cloister ourselves off onto other, way smaller conservative platforms,” she said. “But that’s what they want: to marginalize and silence us.”