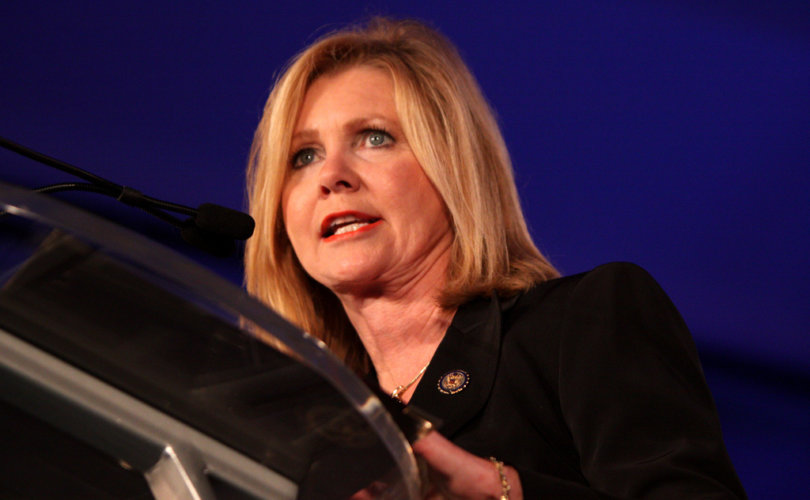 The social media changed its decision late Tuesday after it had flagged the Republican’s ad as “inflammatory” and “negative.”

Blackburn confirmed Tuesday night that Twitter will permit her ad to be promoted on the social media platform without omitting the Planned Parenthood reference.

“I think what has happened, the American people rose up,” Blackburn said on Fox News' The Story with Martha MacCallum. “They are sick and tired of the liberal elites and the liberal media telling them what they're going to listen to, and what is going to be pushed forward and broadcast and what is not, and in this example it was Twitter.”

Twitter had blocked Blackburn’s campaign announcement this week because in it she mentions her work investigating Planned Parenthood for its alleged harvesting and selling of body parts from children aborted at its facilities.

“I fought Planned Parenthood and we stopped the sale of baby body parts,” Blackburn said in the video.

Twitter informed Blackburn’s campaign Monday that the comment had been “deemed an inflammatory statement that is likely to evoke a strong negative reaction.”

The social media platform said the Tennessee congresswoman could run the rest of the video if her “inflammatory” statement was omitted, the AP reported.

While the full ad could not be run on Twitter, it was not blocked from being linked on YouTube or other outlets.

“They decided that to talk about pro-life, pro-woman, pro-baby was inflammatory and would evoke a negative response,” Blackburn stated Tuesday night.

Blackburn had denounced the move by Twitter earlier Tuesday, saying in a statement that the social media company should apologize.

“I am appalled by Twitter’s attempt to censor my pro-life record, and I believe that the entire pro-life community deserves an apology and explanation for their actions,” Blackburn said. “I have spent my entire career fighting to protect and honor life, and I refuse to allow an organization whose stated mission is to ‘provide information instantly, without barriers’ the ability to silence our efforts to protect the unborn.”

Blackburn, who is running for the Tennessee seat held by retiring Senator Bob Corker, chaired the House Select Investigative Panel on Infant Lives.

The panel was established in 2015 to investigate Planned Parenthood and the practices of the fetal harvesting industry, after release of the Center for Medical Progress undercover videos showing Planned parenthood executives bartering for baby body parts.

The panel had concluded in its final report released earlier this year that taxpayer dollars should be redirected from the abortion giant to other federally qualified health centers that offer comprehensive care but do not perform abortions.

Blackburn had also responded to Twitter’s decision to censor her campaign ad by tweeting, “@Twitter shut down our video ad, claiming it's “inflammatory” & “negative.” Join me in standing up to Silicon Valley → RETWEET our message!”

She continued in a campaign email, telling supporters, “ Silicon Valley elites are trying to impose their values on us.”

“While we are being censored, Planned Parenthood continues to push their propaganda across the country,” Blackburn said.

Pro-life advocacy group Susan B. Anthony List also criticized Twitter’s suppression of pro-life content on its platform, pointing out that Twitter’s censorship of Blackburn was part of a pattern.

“We are profoundly disappointed but not surprised that Twitter continues to censor pro-life speech,” SBA List President Marjorie Dannenfelser said in a statement. “Twitter's excuses for removing Rep. Marsha Blackburn's campaign announcement echo the difficulties we and other pro-life allies have experienced with them over several months.

Twitter’s censorship has wider implications than the pro-life movement, she added.

“While we have observed that this censorship seems to be applied selectively to pro-life groups, Twitter's move has broad, chilling implications for all sorts of advocacy and political speech,” said Dannenfelser. “We hope anyone seeking to engage in political speech will join us in denouncing the censorship of Rep. Blackburn. Such heavy-handed tactics only backfire on those who use them.”

Twitter’s censorship in favor of Planned Parenthood or abortion did not start with the Blackburn campaign.

Earlier this year, Live Action announced that Twitter had banned its pro-life ads for being “inflammatory” and offensive” while Planned Parenthood was allowed to continue advertising on Twitter.

Twitter had blocked the Live Action ads since last year, but only more recently informed the group it must delete almost all of its tweets, along with its website, and create a new website to be able to do business on Twitter.

Twitter has suspended other users in the past as well for messages that support marriage, chastity, and Biblical passages on homosexuality.