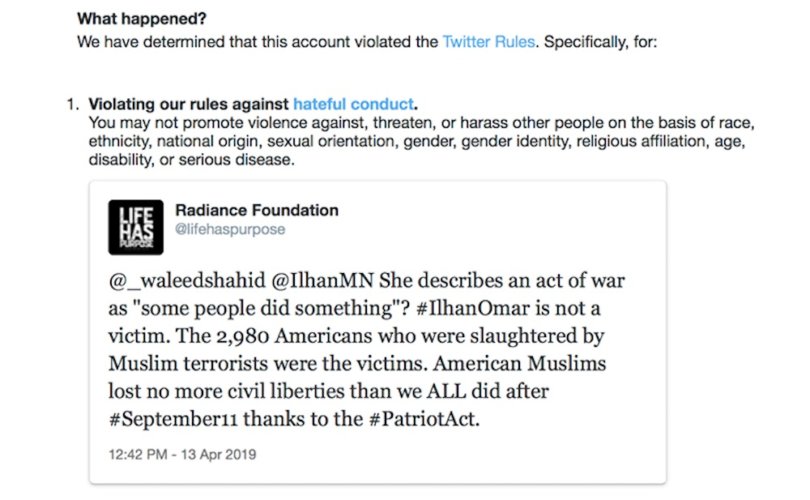 Earlier this month, Omar came under fire for a clip of remarks she delivered at a Muslim event where she praised the Council on American-Islamic Relations (CAIR) and characterized the September 11, 2001 terror attacks on the United States as an occasion where “some people did something” leading to American Muslims supposedly losing civil liberties.

Ilhan Omar mentions 9/11 and does not consider it a terrorist attack on the USA by terrorists, instead she refers to it as “Some people did something”, then she goes on to justify the establishment of a terrorist organization (CAIR) on US soil. pic.twitter.com/ixP3BJfqxS

Omar “is not a victim. The 2,980 Americans who were slaughtered by Muslim terrorists were the victims,” Radiance responded in an April 13 tweet. “American Muslims lost no more civil liberties than we ALL did after #September11 thanks to the #PatriotAct.”

On Tuesday, Radiance shared via Facebook a screenshot of a suspension notice from Twitter claiming that the tweet violated its rules against “hateful conduct.” It carried the stock explanation that users “may not promote violence against, threaten, or harass other people on the basis of race, ethnicity, national origin … or religious affiliation,” but no explanation of how the tweet met the criteria for suspension.

“See if you can find the ‘hate’ in our tweet,” Radiance responded, arguing it had simply “corrected” Omar’s “callous & historically-challenged description of the slaughter of American lives” on 9/11.

The Radiance Foundation is just the latest pro-life voice to find itself restricted on Twitter for vague or dubious reasons.

Just ahead of the release of Unplanned, the pro-life film’s official account found itself suspended and reinstated after public outcry, with its followers removed and temporarily unable to follow the account. The activist behind the Pro-Life San Francisco Twitter account was locked out for naming abortion industry figures highlighted in the Center for Medical Progress undercover videos, despite their identities already being a matter of public record. LifeSiteNews, Live Action, and Sen. Marsha Blackburn have also been restricted by Facebook in various ways.

Twitter generally attempts to downplay such incidents as isolated errors in its content moderation system, but political bias and censorship on the world’s social media platforms remain an ongoing concern, with lawmakers contemplating government intervention in response.