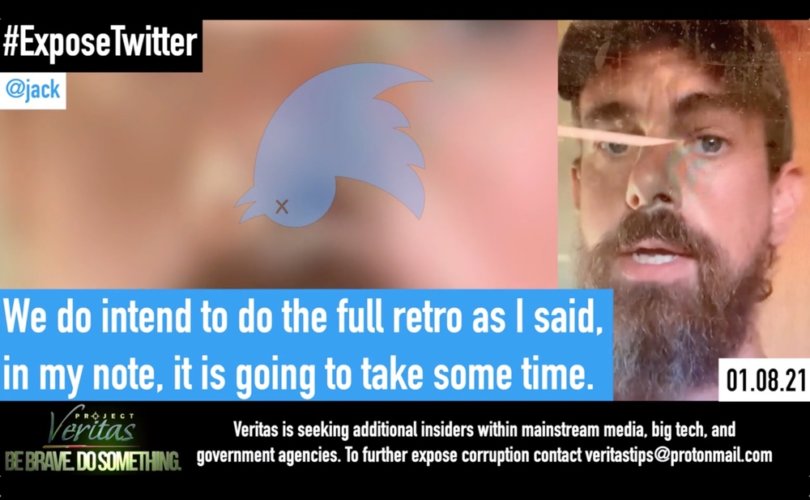 February 11, 2021 (LifeSiteNews) — Twitter has suspended the accounts of Project Veritas and its founder, James O’Keefe, over the conservative investigative organization’s confrontation of Facebook Vice President of Integrity Guy Rosen.

On Wednesday, Project Veritas published a report about Rosen’s admission, from a leaked private meeting, that the social media giant has “a system that is able to freeze commenting on threads in cases where our systems are detecting that there may be a thread that has hate speech or violence,” which is “part of our investments into the integrity space [and] our efforts to protect the election.”

The report contains a video of a Project Veritas journalist confronting Rosen outside his home, asking him how the company defines “hate speech.” The video does not display the address and blurs all visible license plates on cars, though the house number is briefly visible. Twitter suspended the accounts, supposedly for violating the platform’s rule against “post[ing] other people’s private information” without authorization.

“It’s pretty outrageous that Twitter has done this for a harmless video. It shows that Twitter and Facebook are teaming up to censor content that Americans deserve to see,” Project Veritas Media Relations Manager Mario Balaban responded in a statement to The Daily Caller.

“Twitter has asked us to delete a tweet that supposedly violated their rule on positing “private information,” Project Veritas followed up on Telegram. “The tweet in question arose when asking for comment from Facebook’s VP of Integrity about censorship. Project Veritas is appealing this decision, as no privacy was violated. The reporter on the ground never revealed the location, nor were any street signs that would indicate the location visible. Reporters speak with people on the street all the time. Project Veritas stands by our reporting. You can’t cancel someone who doesn’t want to be canceled.”

Despite Twitter’s official explanation for the suspensions, the move is consistent with previous material leaked to Project Veritas, in which Twitter CEO Jack Dorsey admits that the “full retro” Twitter is undertaking in content restriction, done in the name of “protect[ing] the integrity of that conversation,” is “going to be bigger than just one account, and this is going to go on for much longer than just this day, this week, and the next few weeks and go on beyond the inauguration.”