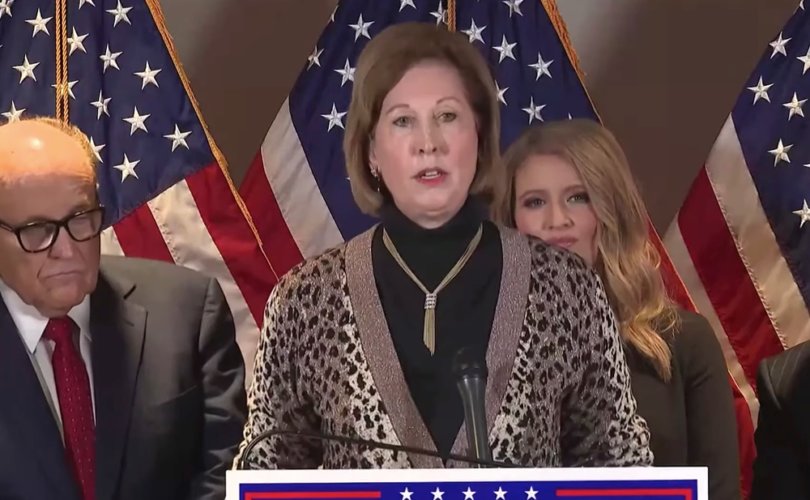 Breitbart reports that former Trump National Security Advisor Gen. Michael Flynn, whom Powell previously represented, confirmed the news of the Twitter suspension Sunday. The reason for Powell’s suspension has not been confirmed, but appears to have stemmed from her sharing a link to an article purporting to connect voting technology companies Dominion, Sequoia, and Smartmatic to the Chinese Communist Party.

Powell’s suspension coincides with apparent divisions between Powell and the rest of Trump’s legal team. Despite Powell appearing alongside Trump lawyers Rudy Giuliani and Jenna Ellis at a campaign press conference last week, the campaign released a statement Sunday declaring without elaboration, that “Sidney Powell is practicing law on her own. She is not a member of the Trump Legal Team. She is also not a lawyer for the President in his personal capacity.”

The statement followed an interview Powell gave Newsmax the day before, during which she made several unsubstantiated claims well beyond the Trump campaign’s official arguments. Among them were an insinuation that Georgia Republican Gov. Brian Kemp has been bought off by Dominion, and a claim that Democrats rigged Dominion machines to steal the 2016 presidential nomination for Hillary Clinton and bought the silence of socialist Sen. Bernie Sanders about it (Clinton, of course, went on to lose 2016 to Trump).

The Washington Examiner adds that “sources close to the president” said Powell did not share her evidence on machine vote-switching with either the campaign or the White House, and have grown frustrated that her allegations have overshadowed concerns over more traditional, and provable, forms of election fraud.

Others, such as Population Research Institute founder Steven Mosher, dispute the idea that Sunday’s announcement represented a division between Powell and Trump, and instead maintain that the Sunday statement merely clarified Powell’s status as an independent actor. Further compounding the mixed messages, Ellis herself subsequently shared Powell’s own statement to that effect:

“I agree with the statement today. I will represent /#WeThePeople and seek the Truth. I intend to expose all the fraud and let the chips fall where they may. We will not allow the foundations of this great Republic to be destroyed by abject fraud.” https://t.co/ZjAZ8OcreH

Former Vice President Joe Biden has been unofficially declared the winner of the presidential race (pending official certification by all fifty states), but the Trump campaign maintains that it has identified more than twice the number of ballots nationwide necessary to erase Biden’s presumptive margin of victory.