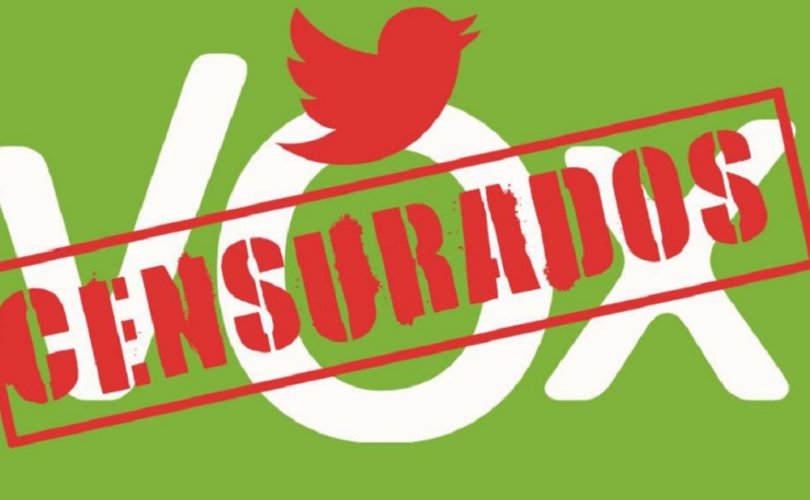 In a move that has incited concerns in Spain that media companies are in league with the increasingly totalitarian posture of the reigning Socialist Party, Twitter silenced the official Vox account, alleging that the party had incited hatred on the platform. This came after Vox party leader Santiago Abascal tweeted on Saturday that the socialist government is “promoting pedophilia with public funds.” Vox spokesman Manuel Mariscal tweeted later that the suspension is for “none other than censorship.”

On Saturday, Vox tweeted a post directed at Adriana Lastra, Socialist Party undersecretary general, telling her: “What we can’t stand is for you to come into our house and tell us how we should live and how we should educate our children. And even less if you promote pedophilia with public money.”

On Tuesday, Twitter informed Vox that it was “temporarily limiting” the party’s social media account, thereby suspending some functions, including the posting of new messages. The social media giant alleged that the reason for the suspension was because the party had not complied with its prohibition on “conduct inciting hatred.” Twitter also prohibits threats, assaults, and the incitement of violence against people.

Vox is at odds with the Socialist Party and other leftist parties regarding abortion, parental rights, and public education. Regarding parental rights, Vox is demanding that parents have the right to prevent their children from attending classes that promote the government’s agenda on sex education and LGBT. According to Vox, parents should have the right to have advance notice and decide whether their children should attend “talks, workshops or activities with an ideological or moral leaning against their convictions.”

In the province of Murcia, schools can establish what sort of parental authority is required in order to inculcate children with the LGBT agenda. Murcia’s regional governmental is controlled by a coalition of the centrist Popular Party and the right-of-center Ciudadanos party, even while it depends on four Vox votes in the provincial legislature. The provincial budget hinges on the vote of one of the Vox legislators. Vox demanded a parental veto for sex education, forcing the other provincial parties to concede.

The debate has also rankled the regional government of Navarra, a province that borders France. In Navarra, no child is allowed to opt out of the program of sex classes. According to the Navarra government website, its Skolae educational program for “equality” asks for reflection on the “multi-causal nature of social phenomena and, as is evident, also of gender inequality.”

… elaborates the concept of intersectionality in order to ‘understand the categories of race, gender and class as connected, intertwined and intertwined elements.’ It is necessary to make visible the diverse categories that generate and reproduce inequality: race, gender, class, ethnicity or culture. The environment of the educational action is characterized by a progressive multiculturalism. The coeducative action must be a space to be aware of the different cultural variants of the sex-gender system. It is necessary to jointly know and analyze its implications in the society in which we live.

The website also sets out the curriculum’s goals for children under the age of six:

Encourage dialogue and trust in communication about sexual issues both at school and in the family as a factor in the prevention of child abuse.

Vox says on its website that Twitter has undermined the basic freedoms guaranteed in the Spanish constitution. Mariscal declared that the party’s tweet directed at Lastra came because thee party believes that the government sex education program means that “minors may have access, without parental consent or acknowledgement, to practices and information with sexual content.” He suggested that the socialist government directly pressured Twitter to suspend the party’s account. He noted that Vox is Spain’s third largest political party and has 3.6 million members.

While the party is frequently dubbed right-wing or far-right, its platform includes a call for a single-payer national health system. Vox also favors a reduction in immigration. The party is vocal in opposing what it calls Islamization, as well as wasteful spending.

Spain’s socialist minister of education, Isabel Celaá, told the newspaper El Correo on Monday that a “homophobic family … does not have the right to make their children homophobic as well.” “Parental authority cannot be confused with property,” she said. Celaá alleged that Murcia “seeks to undermine the right to education and censor the actions of educational centers and their teachers.” She claims that the parental veto denies the “integral training of students” as noted in Spain’s Education Law. On Monday, Celaá called on Murcia to exercise “moderation and common sense” by annulling parental consent for the sex classes, claiming that she would rather not go to court.

Pablo Casado, who leads Spain’s center-right Popular Party, said in a speech to party members in Murcia: “Are they telling me that we have families like in Cuba, that children belong to the revolution?”

On Sunday, in an apparent riposte to the Socialists, he said, “Are we going to arrive at the point where children inform on their parents if they are not good revolutionaries?”