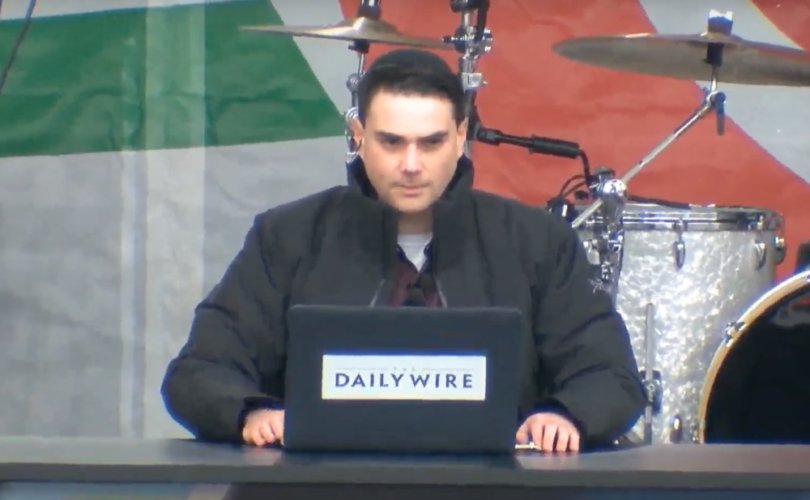 January 21, 2019 (LifeSiteNews) – Two companies so far have dropped their sponsorship from conservative commentator Ben Shapiro’s show following his live podcast from the March for Life and particularly one of the hypotheticals Shapiro used to address one pro-abortion argument.

Shapiro made two appearances at the annual pro-life gathering in Washington, D.C., first broadcasting his popular show live from the rally stage, then delivering a speech of encouragement to the gathered pro-lifers. At one point during the former, he responded to numerous pro-abortion talking points, including the theory popularized by the 2005 book Freakonomics that legalizing abortion reduced crime rates in the United States.

In addition to disputing the statistics behind the claim, Shapiro made a moral point by invoking a hypothetical in which one could go back in time and kill German dictator Adolf Hitler while he was still a baby.

Whether one would murder the infamous Nazi tyrant before he had the chance to slaughter millions and plunge the world into war is a common thought experiment in ethics courses and conversations, popularized by countless stories in television and literature. Yet liberal media outlets quickly descended on Shapiro for referencing it.

“The crowd cheered after Shapiro said the words ‘baby Hitler’ eight times in less than 30 seconds,” the Huffington Post’s Sebastian Murdock wrote. Frank Dale of ThinkProgress called the passage “bizarre” and that putting it in context with the surrounding remarks didn’t “provide vindication.” Neither they nor other critics have explained how the comments were objectionable or requiring “vindication” in the first place.

Regardless, two sponsors subsequently cut ties with Shapiro, The Hill reports. Toothbrush manufacturer Quip announced that “following one of our ads being read in a venue we did not endorse, we have chosen to discontinue our advertising relationship with this show,” and to “ensure all of our advertising partners are aligned with our oral health mission and values.”

In tweets that have since been deleted, the makers of “relaxation and meditation app” Calm responded to social media users complaining specifically about the “baby Hitler” argument. “We do not align with this message. We’re pulling our sponsorship,” they said.

Shapiro himself addressed the controversy later Friday, restating his original point and criticizing his foes who seized on it.

“The argument was simple: pro-choicers sometimes argue that abortion lowers crime rates. It is immoral to kill children because of what they might become in the future,” he said. “Hence the baby Hitler reference. Now, I’m sorry that some people are wildly intellectually dishonest or idiotic and pretend not to understand the argument. But I’m glad they were born all the same!”