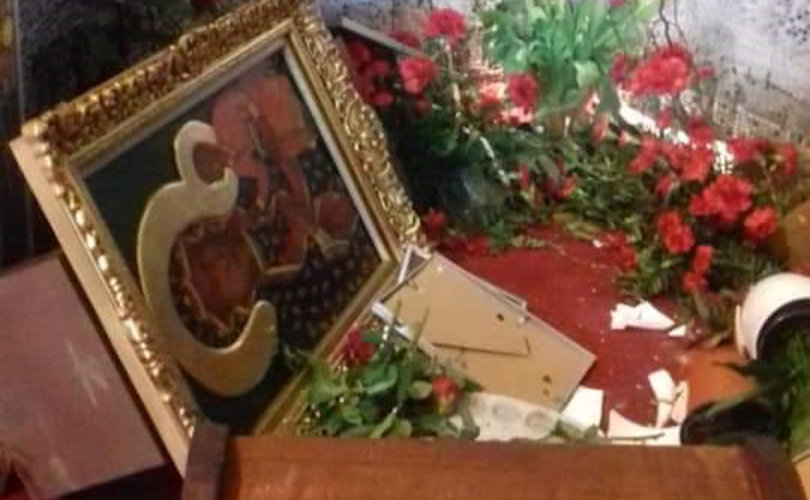 LANARKSHIRE, Scotland, May 1, 2019 (LifeSiteNews) ― Scottish Catholics are shocked and worried after a recent bout of vandalism in and near the city of Glasgow.

On Saturday, April 27, anti-Catholic graffiti was found spray-painted on a bus shelter outside Holy Family Catholic Church in Mossend. On Monday, April 29, vandals entered St. Simon Catholic Church in Glasgow and attacked the sanctuary, overturning candles and a shrine to Our Lady of Częstochowa, and breaking a statue.

The anti-Catholic graffiti included the timeworn sentiment “F*** the Pope.” The local police said they would meet with the local Catholic diocese.

“Enquiries are ongoing into offensive graffiti painted on boarding near to a Catholic church in Mossend, Lanarkshire (…) ,” the Lanarkshire Police Division tweeted.

“The local policing team in Bellshill will meeting with local representatives from the Diocese of Motherwell with regard to this incident.”

Police in Glasgow stated that there is no evidence the attack on St. Simon’s, the principal place of worship for the city’s Polish community, was either motivated by sectarianism or a hate crime:

“We received a report at around 4:20 pm on Monday April 29 of vandalism at St Simon's Church in Glasgow,” a representative from Police Scotland said. “Officers attended and enquiries are ongoing.”

“There is nothing to suggest that it was a hate crime or motivated by sectarianism.”

However, many residents of Scotland, living in a country where anti-Catholic incidents are on the rise, shared their beliefs on Twitter that the church vandalism was indeed a hate crime.

Asked if he thought the anti-Catholic graffiti outside Holy Family Church and the destruction at St. Simon’s were related, the Scottish Catholic said it didn’t matter.

“To me as a Catholic it doesn’t matter if they’re related or not because we’re seeing much more vandalism now,” he said. “There’s just a general rise in anti-Catholicism in Scotland.”

LifeSiteNews’ source recalled an overnight attack on a Catholic Church in Coatbridge, in which the Blessed Sacrament was removed from the tabernacle and scattered on the floor. He also referred to an incident in Glasgow last July when a Catholic priest was spat on by a participant during an “Orange Walk,” an annual parade that traditionally expresses pride in British Protestant heritage.

A representative for the Archdiocese of Glasgow published disgust with the desecration of St. Simon’s on Facebook.

“A shameful attack on a much loved church,” the post said. “Let’s find those responsible and send out the message loud and clear that this kind of action is unacceptable.”

An anti-sectarian group named “Call It Out” sent out an appeal over Twitter to challenge recent anti-Catholic acts.

“Please stand with us in challenging this!”

Scottish politicians have also turned to Twitter to signal support for the Catholic community and decry the recent incidents of vandalism. Richard Leonard, the leader of the Scottish Labour Party, wrote that anti-Catholic bigotry in Scotland must cease.

“This is distressing,” he wrote. “The whole congregation of St. Simon’s have my solidarity, and we must do all we can to stamp anti-Catholic bigotry in Scotland.”

Similarly, Willie Rennie, the leader of Scotland’s Liberal Democrats, tweeted that the attack on the church was “very disturbing and should be investigated by @policescotland.”

Anas Sarwar, the Labour Member of Scottish Parliament for Glasgow and a Muslim, tweeted: “Solidarity. Another unacceptable and hate-filled attack on a place of worship. We must come together and challenge this. An attack on one faith is an attack on all faiths.”

However, there has not been a response by Nicola Sturgeon, the leader of the ruling Scottish Nationalist Party. This does not sit well with Sancta Familia Media’s spokesman.

“A Labour MSP has shown his solidarity, so why can’t the First Minister?” he asked.

“If this sort of thing is tolerated, what’s the next step?”

Historically, there has been an uneasy relationship between Scotland’s Protestant majority and Catholic minority. In the 20th and 21st centuries, sectarianism was exacerbated, or prolonged, by football rivalries, most famously between supporters of Glasgow’s “Catholic” Celtic and “Protestant” Rangers soccer teams.

Although relationships between the different communities of Christian church-goers are healthy today, Scottish Catholics must still contend with the bigotry of those wedded to the old sectarianism and those who seek to stamp out Catholic beliefs about marriage, sexuality and the family.

Although Catholics represent only 15 percent of the Scottish population, they suffer 57 percent of all religion-motivated hate crimes