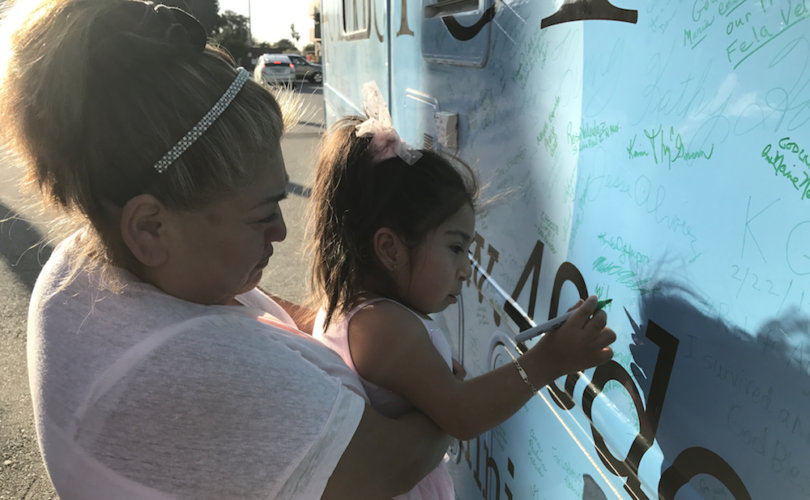 Milagros Perez is held by her mother Rosa as she signs the 40 Days for Life bus.

ORANGE, California, June 22, 2017 (LifeSiteNews) – Two different doctors told her to abort. Her husband was inclined to agree with them. But despite a serious adverse prenatal diagnosis and feeling like she had no support, Rosa Perez chose life for her baby.

Perez gave birth to her daughter in 2011, after being told by doctors her child’s condition was so severe that she would give birth to a “monster.”

The moment her daughter was born, after her husband told her it was a girl, Perez knew it was a miracle. So through the anesthesia from her C-section, Perez promptly said, “Her name will be Milagros.”

Milagros has no legs and a cleft palate. She has had many surgeries and faced challenges, with more to come. But the little girl is full of joy, she just finished kindergarten and is set to attend first grade in the fall. Her mother describes her as very self-assured, strong and independent.

Things have not been easy for Perez and her family.

But the care and support she received after encountering Alejandra Baker, the 40 Days for Life director for Orange County, California, after Perez walked out of the local Planned Parenthood was the difference between her languishing alone and being empowered to choose life.

Despite the difficulties, the devoted mother remains clear about who is the author of life.

“The diagnosis of a doctor does not compare to the love and the warmth of a parent,” Perez told LifeSiteNews. “God has the last word.”

“It’s in good hands,” she said. “It’s worth keeping your baby until God wants to take your baby.”

It was during a 40 Days for Life campaign in the spring of 2011 when Perez walked out of Planned Parenthood 18 weeks pregnant and Baker approached her.

“I could tell that Rosa was in distress and that she did not want the abortion,” Baker recalled. “But she felt that she had no way out.”

Doctors had told Perez that she needed to abort because her body wouldn’t hold the baby, and the child would come out in pieces. They told her the baby had no nose or chin, and probably wouldn’t have internal organs either.

One doctor implied that Perez just wanted to be dependent on the government by keeping her baby.

It was heartbreaking for Perez to hear those words from the doctor. She felt so lonely, and she didn’t want to have those feelings because she knew they would transfer to her baby.

Perez responded, “I’m not interested in the assistance, I just want my baby. I’m willing to raise my baby. Just tell me what I need to do.”

Regardless, it was the doctor who made not one, but several appointments for Perez at Planned Parenthood.

They didn’t want to continue to monitor her pregnancy, Baker told LifeSiteNews.

Perez thought if she went to the appointment they would stop pressuring her, not fully realizing what awaited her at the abortion giant’s Orange County location.

The Planned Parenthood staff began by telling her she would first have a pregnancy test, Perez recalled, when she knew she was pregnant and didn’t need the test.

That’s when it was clear what was going on, and she left the facility.

Her decision to choose life cause some friction in her family, but Prez found strength in God, surrounding herself with supportive friends from her church.

When Milagros was born, Perez told hospital staff to give her whatever care she needed, even if it meant she couldn’t see her right away.

“I accept her as she is,” she told them.

Milagros was moved to another hospital specializing in pediatric care while Perez recovered at the first hospital. Milagros remained in intensive care for almost three months.

Once Perez was released, she stayed there with Milagros and pumped breast milk for her for 7 1/2 months. Milagros couldn’t nurse because of her cleft palate, so she took her mother’s milk first through a tube in her nose and then via her stomach.

Although Milagros was born with no legs, she does have one foot. Before she turned one, she had one surgery to allow her to go to the bathroom, one on her chest for reflux, another to set up the feeding tube in her stomach, and yet another for her cleft palate.

She has had three ear surgeries because of ear infections, two surgeries on her tongue and a total of three on her cleft palate. She’ll have at least one more on her face and one for spina bifida. Milagros’ twice per week physical and occupational therapy sessions lasted until she was three. She now goes less frequently.

A little girl on the go

Perez gives full-time care to her daughter, except for when she is in school. It was Milagros who insisted on taking the bus to kindergarten, instead of her mother dropping her each day.

The little girl has a special wheelchair, but she also uses a skateboard to get around. She is always moving and loves to dance, her mother said, and even takes a dance class.

Milagros does get tired, but this doesn’t stop her.

Perez said sometimes as she crawls, her hands will bleed. Perez will beseech her to stop, but she said her daughter tells her, “Don’t worry Mommy, it's fine, it doesn’t hurt that much, I can do it.”

The challenges for the family do continue.

But through it all, she continually sees how her daughter is a miracle. Perez shared with LifeSiteNews how her little girl gives witness to life each day through her joy and her love for everyone no matter the difficulties that may be before her. At times, the reminder of how miraculous her child is comes from others.

Perez once ran into a nurse from the hospital where Milagros was born when the two were dropping their children at school. The nurse took pictures of Milagros to show her co-workers, telling Perez, “We thought she wasn’t gonna make it. I can’t believe you’re here.”

When a local news station came to cover Milagros’ birthday party last year, the reporter remarked that it felt like an enchanted place full of love.

“I’ve been to parties with a lot of money,” the reporter said, “but I’ve never felt the love that I feel right now.”

One among tens of thousands of lives saved

Milagros is one of more than 13,000 children saved by 40 Days for Life since 2007, and she has appeared at events in conjunction with the pro-life outreach. She’s too young to really grasp why she gets the attention she does when she makes an appearance. She just enjoys the love.

Perez plans to share the full story when Milagros is old enough to understand. Her goal is to equip her daughter so that she helps other children in similar situations. She has been documenting everything and has an album to show her.

Baker has served nine times as director for 40 Days for Life, being part of roughly 17 saves by her local campaign. They’re all special, though Milagros does stand out.

“The inspiration this little girl has been, that’s what keeps us going,” she said. “Just thinking about it, it’s joy. It brings you to tears. You see them alive and you say, 'It’s worth it.'”

Perez would tell other parents facing an adverse prenatal diagnosis that nothing matters as much as loving your child.

“The love and the care can do it all,” she told LifeSiteNews. “It’s worth even if God takes the baby as soon as the baby is born. It’s worth it to hold your baby.”

40 Days for Life is currently accepting applications for communities to host the fall 2017 campaign. Click HERE for more information.