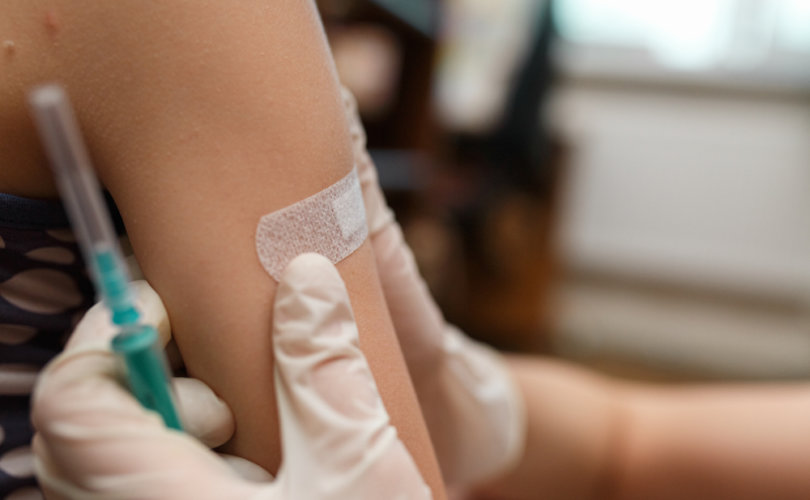 (LifeSiteNews) — Walgreens could face significant legal action after one of its Indiana locations gave COVID shots instead of flu shots to two children.

“An Evansville [Indiana] family and their attorney says [the parents and kids] were accidentally given full adult doses of the Pfizer coronavirus vaccine instead of flu shots,” 14News.com, an NBC News affiliate, reported about the October 4 incident.

The Pfizer shots are not approved for children younger than 12 years old, and the dose would be about one-third of the adult dose regardless. The Centers for Disease Control and Prevention acknowledged a link between the Pfizer and Moderna COVID shots and heart inflammation during a June meeting of its vaccine safety panel.

Personal injury attorney Dan Tuley is representing the family. He told the news station the one child is 4 and one is 5. The kids were taken to a pediatric cardiologist and “both are showing signs of heart issues,” 14 News reported.

“Due to privacy laws, we cannot comment on specific patient events. However, in general, such instances are rare and Walgreens takes these matters very seriously. In the event of any error, our first concern is always our patients’ well-being,” Walgreens told the news outlet today. “Our multi-step vaccination procedure includes several safety checks to minimize the chance of human error and we have reviewed this process with our pharmacy staff in order to prevent such occurrences.”

Neither Tuley nor Walgreens responded to a LifeSiteNews request for comment and update on the situation.

A health law attorney said Walgreens would likely lose a lawsuit for negligence, but a court case could force into the open information about the predicted and known consequences of COVID shots.

The parents “have a number of tort actions they can and should file. My opinion is that there’s obviously negligence, some issues, a primary cause of action would be the negligence,” Thomas Renz told LifeSiteNews in a phone interview today.

Renz is representing healthcare workers in Michigan who do not want to take the COVID jab.

While the Walgreens’ employees accidentally gave them the shot, “it’s certainly reckless beyond words,” Renz said.

Renz said the lack of long-term data on the COVID shots could lead to a large settlement.

“The real, the most interesting part of this is going to be what are the damages,” Renz said. “[I]t will be particularly interesting because in terms of damages you’ve got a situation now, where what does this vaccine really do? There’s no long-term study, short term they are already suffering effects. Where does this go long run?”

“They need to do a full discovery to assess the damages,” the attorney said.

Renz is not an Indiana attorney, but he explained that the general principles of tort law are to “make someone whole.” For example, if someone breaks another person’s arm, the victim would likely win a lawsuit to recoup the cost to fix the arm.

He predicted that Walgreens’ attorneys will want to settle.

“The other side on this is going to be begging to settle with some ridiculous amount of money. I don’t think they are going to want to do everything they can to avoid litigation on this,” Renz said. “It’s just really going to be a matter of what sort of injuries are done. This is a very clear win. I don’t know how you lose this case … It’s a very clear case of negligence.”

Due to the lack of long-term studies on the shot, “no one knows” how to “make someone whole” after accidentally getting jabbed, he told LifeSiteNews.

Teens have been suffering, including dying, from pericarditis and myocarditis, forms of heart inflamation, after taking the COVID shot.

An October 5 death investigation report concluded that a healthy 15-year-old teenager died of heart complications just two days after getting jabbed in June.

A Canadian medical professor has said that the effects can be felt for years to come, including a higher risk of heart attack.

“Contrary to what a number of people have said, there is no such thing as ‘mild myocarditis,’” Dr. Steven Pelech wrote in August. “Why would you want to submit people who are unlikely to be negatively affected by the virus itself with vaccines that have now been proven, in scientific literature, to be associated with health risks?”