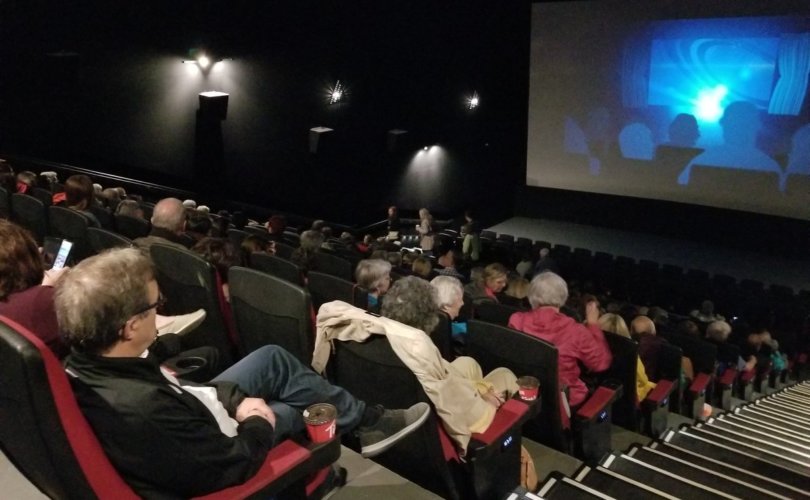 Canadians fill a theatre on Thursday, July 18, to watch Unplanned.Twitter

“Cineplex and Landmark have decided that they are not going to keep showing the movie. Now I would ask you, what business that has a full house suddenly decides that they’re going to stop business?” Solomon told LifeSiteNews.

“So if this isn’t political, if this isn’t agenda motivated — I mean it’s absurd,” he said. “You’re in the movie business to sell tickets.”

LifeSiteNews contacted both chains and Cineplex declined comment, other than to point to the open letter by CEO Ellis Jacob defending the corporation’s decision to screen Unplanned for a week. Landmark did not respond by deadline.

But the decision led the directors to take an “unprecedented” step, says B.J. McKelvie, president of Unplanned’s Canadian distributor Cinedicom.

Starting August 9, they will allow faith-based groups, pro-life groups, individuals and other interested parties to license the movie and sell tickets to screen it at churches or other venues.

“This is exciting,” McKelvie told LifeSiteNews. “It’s almost unheard of doing it this way. I don’t think we’ve ever done it this way.”

“We gave the movie theatres the opportunity,” he said. “We have more screens with the churches and the groups, so we figured why not allow them to license the movie and do it exactly the same way we do it with the theatres, and have the ability to make money on it, raise funds for their organizations and churches.”

Unplanned dramatizes Abby Johnson’s conversion from a director of a Planned Parenthood abortion facility to full-time pro-life advocate and founder of And Then There Were None, a nonprofit proactive ministry dedicated to helping people leave the abortion industry.

The movie opened in the United States on March 29, where it has earned so far $18.8 million US, but was effectively banned in Canada because no Canadian distributor — including Landmark and Cineplex — would take it on, until McKelvie stepped forward in June.

Cineplex screened Unplanned in 14 venues for a week, and Landmark in seven, in the midst of a firestorm of controversy in which Canadian abortion advocates, media, and Liberal staffers and politicians warned the movie was dangerous propaganda.

Unplanned surpassed expectations, bringing in $352,000 in its opening weekend at 49 reported Canadian theatres, a trend that continued during the week. Box-office numbers were $95,000 Monday, $95,000 Tuesday and a whopping $112,000 on Wednesday, Konzelman told LifeSiteNews.

“The numbers are shocking,” Solomon said. “Every day we’re getting the same numbers, which is unbelievable. It basically means most of the theatres are maxing out.”

Unplanned had the second highest per-screen average in North America after Spiderman, McKelvie told LifeSiteNews, and he expects more independents will sign up next week when they see the box-office results.

“These numbers are really going to help,” he said.

While Cineplex and Landmark are not extending the run, they are allowing buyouts at their theatres, he said. In fact, all 1,300 seats in eight theatres at the Landmark Grand 10 in Kelowna have been purchased for an August 3 screening.

Meanwhile, Cinéma Guzzo in Quebec is holding Unplanned for another three weeks, Solomon told LifeSiteNews, and McKelvie says many independent theatres are also extending the run.

That includes the Movie Mill in Lethbridge, which is holding Unplanned over another week, says manager and co-owner Leonard Binning.

Being the first Canadian theatre publicly identified as screening the pro-life film led to “a lot of nasty comments” as well as “some veiled threats” of protests that didn’t happen, he told LifeSiteNews.

Moreover, two local groups — one styling itself the Concerned Citizens of Lethbridge, the other a “pro-choice” association — each paid for a 15-second still advertisement in the eight-minute rotation that plays while people wait for the movie to begin, Binning said.

The Concerned Citizen ad stated: “The Unplanned movie is grossly inaccurate; for more information from a real medical professional go to unplanned-debunked.com” and the message from Pro-Choice Society of Lethbridge & Southern Alberta read: “Abortion? Birth control? We support and empower reproductive choice.”

“I do not take sides,” Binning said. “I was happy to take their advertising.”

Binning has also been threatened with a boycott, he said. “I’m fine with that as long as they also boycott Cineplex because Cineplex also played this film … just don’t pick on the mom-and-pop shop.”

Despite all this, screening Unplanned has been “a very positive experience,” Binning said.

“We’re having an awful hard time getting radio ads,” he said, noting that 68 radio stations across Canada turned down ads for Unplanned with no reason given.

“I would ask people what is the other side so scared of? It’s a movie,” Solomon noted. “They’re scared because someone will find out the truth and change their position … That’s what’s frightening them, is that people are going to find out the truth, that it’s a baby.”

Meanwhile, Unplanned is “going to every nation on the face of the earth,” he told LifeSiteNews.

“I think going to other countries will be like a vacation compared to Canada. … We never expected it,” said Solomon.

July 24, 2019, 11:14 AM EST correction: An earlier version of this report stated that Unplanned had earned $1.8 million when the correct number is $18.8 million. This report has now been corrected.