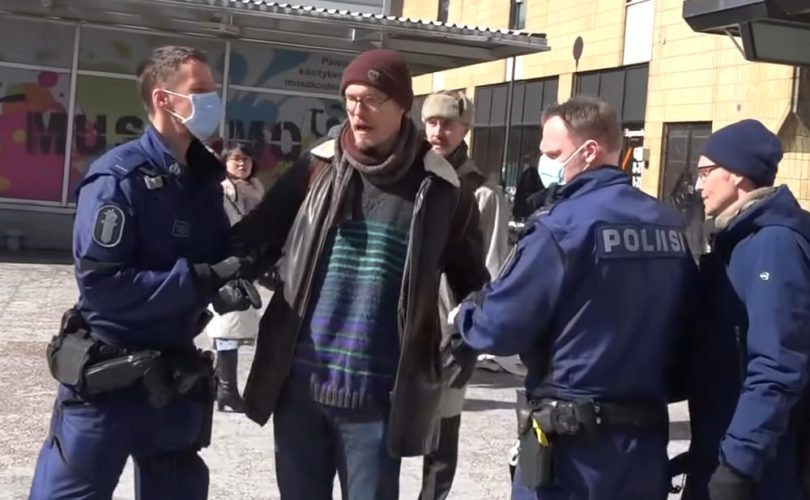 April 15, 2021 (LifeSiteNews) — Two Christian pastors were arrested and detained in Espoo, Finland, for over four hours last Sunday, presumably in order to stop them from resuming an outdoor worship service that had been interrupted by police because of COVID-19 regulations. The two pastors were unable to obtain clear information about why they had been detained, according to a video report posted in English on YouTube by another pastor, Miska Wilhelmsson, who is a friend of the two men, and who sometimes preaches during their services.

The incident took place on Sunday, April 11, when a few dozen members of the Baptist-affiliated “home church” (Kottikirko) gathered on a large, airy plaza surrounded by closed shops and restaurants for their public worship that was also being filmed for faithful to follow on internet. According to the congregation’s website, it was the fifth Sunday running that the Christian group held its Sunday gathering in the open air in the southern Finnish town of Espoo.

The Espoo Kottikirko is a fully registered and officially recognized church in Finland, with all the legal and constitutional rights afforded to religious assemblies and churches in the country. In his video, Wilhelmsson stated that despite local “misunderstandings” about the fact, national or regional health restrictions do not apply within religious congregations, and public authorities may not interfere with religious gatherings.

In normal times, their preaching and worship take place in a restaurant which they are able to rent because it does not cater to the general public on Sundays. But COVID restrictions have forced restaurants and other public venues to remain closed for the last weeks in the Espoo and Helsinki areas. The church run by Tommi Matikka simply moved its gatherings from the restaurant to the public plaza in front of it — with “permission,” according to Wilhelmsson, because the church does not own premises adequate for worship.

Nothing untoward happened until last Sunday, when masked police officers came to warn the worshipers that they must leave the area because their public gathering was illegal.

But the 35 members of the 40-strong community remained, observing 2 meter distancing between family groups.

The police then returned in larger numbers — up to four police vans closed in on the group, according to Miska Wilhelmsson — and after warning the two pastors who had been preaching in a calm manner, turned down their loudspeakers, argued about the group’s compliance with COVID regulations, and threatened to arrest everyone.

At one point, the police even told Tommi Matikka that his family that was present at the worship was not “socially distancing” correctly. The pastor looked surprised and argued that his wife and five children — “one in the womb,” explained Wilhelmsson in his video — were at least two meters distant from other family groups. The police answered that while it is true that families may remain close together inside their homes, outside each member, even toddlers, should observe the 2 meter rule. Matikka asked the police to repeat that statement, and laughed when the police confirmed his Kafkaesque statement. According to witnesses, the police officer even said family groups should allow five meter distances between them, despite the fact that no such rule exists to that effect.

Several police officers then seized the two pastors by the arms and led them to separate police vans before frisking them and taking them away while the congregation, by now holding hands, sung hymns. The two pastors were held in jail cells: While they were apparently being held for questioning, they were not in fact given a real opportunity to express themselves and ask their own questions regarding the justification of the violation of their freedoms.

There are full videos online of the police forcibly putting an end to the group’s worship and refusing to give clear answers, only saying that the Christian worshipers needed to comply with police orders.

The Espoo Kottikirko community clearly does not intend to let itself be trampled on or to be intimidated because its two pastors, who reacted peacefully throughout the incident, were treated “like criminals,” as Wilhelmsson put it.

The community’s website published a communiqué for the media this Wednesday under the title: “[April 11] meeting was not illegal.” The site’s front page announced that worship will again take place next Sunday, April 18, at 10:30 at the same location, adding: “You are all welcome.”

The church’s media statement says the two pastors were arrested despite the fact that the service being held last Sunday could not be considered to be “in violation of current assembly law”:

The restrictions on assembly imposed by the Regional Government Agency do not apply to worship services organized by religious communities or to other similar public religious practice on the community's own or equivalent premises.

The matter is open to interpretation as regards the premises, but based on the wording of the law and its preamble, I do not think it is possible to state categorically that a church service could not be held, for example, in a designated outdoor space if it could be regarded as a corresponding space within the meaning of the law. However, the question of whether an event falls within the scope of the assembly restrictions must be assessed on a case-by-case basis.

After a police officier told another media outlet, Kotimaleete, that the group was not observing “safety distances,” Tommi Mattika stated:

Video recordings from the Espoo Home Church clearly show that the families were two meters distant from each other. One of the videos we published shows how the safety distances were assessed in cooperation with the police. The police insisted that even members of the same family should be seated two meters apart. There were young children in the families at the event, and breaking up families has nothing to do with preventing the spread of an infectious disease, nor is such a restriction found in any publicly available official guidelines. It was only when the police threatened to break up the meeting and take people to police cars that people started holding hands. At no point was there any violent resistance to the police.

While insisting that “a Bible-believing Christian is a law-abiding Christian,” Mattika added that “the Finnish Constitution stipulates that no attempt may be made to interrupt or even disrupt a religious service.” Indeed, “Chapter 17 (§ 10 and 11) of the Criminal Code states that ‘anyone who disturbs a religious service, church service, other such religious exercise or funeral service by noise, threatening behavior or otherwise, shall be sentenced to a fine or imprisonment for a term not exceeding six months for violating religious peace.’”

In the face of police persecution, the Espoo Kotikirkko stands firm. The congregation’s statement quoted Matikka’s words: “It is therefore clear that religious worship has always been seen as a core function of a society based on the Bible. Of course, a wise community will plan its worship service to take into account any hygiene guidelines and members of at-risk groups.” The statement announced next Sunday’s new gathering, adding that the event had been notified to the authorities “because the service may now attract more than 200 people.”

Under current national and regional COVID restrictions that will probably be relaxed in the coming weeks, masks are merely “recommended” in the Espoo area, public gatherings of more than 6 people are prohibited until the end of April and “social distancing” is compulsory. In practice, police seemingly does not intervene in the region when fewer than 200 people find themselves in a public location.

More stringent action appears to be building upon public recommendations in the temporary amendments to the Finnish Communicable Diseases Act that entered into force on February 22, 2021. These allow the authorities to take measures such as closing down certain shops and businesses with very little notice, and also considerably augment the authorities’ “right to obtain information and executive assistance.”

However, the statement added: “Religious communities are subject to a security injunction made possible by an amendment to the Communicable Diseases Act: Restrictions on the use of customer and business premises,” which would seem to indicate that there is a push to restrict the constitutionally recognized rights and freedoms of at least some Finnish religious communities.

Finland, with its population of 5.5 million, has had a total of 82,564 individuals test positive for SARS-CoV-2, and 877 deaths have been ascribed to the virus —this is a lower rate than in countries such as France, Italy, or the U.K. Since last November, the average number of daily deaths over a seven-day period attributed to COVID-19 peaked at 7 on December 23, and has presently reached 2. New daily “cases” peaked at 863 on March 20 after a steady rise that began mid-January, without a corresponding rise of the death toll; the numbers have declined steeply since then and reached 286 on April 13.

Finland offers its population a COVID-19 symptom checker which assesses patients’ risk of suffering from thrombosis because of the infection in order to prescribe anti-coagulants, which means that at least some form of early treatment beyond paracetamol is being recommended. Interestingly, women using a contraceptive pill are officially quoted in the questionnaire as being at a higher risk for blood-clots because of COVID.