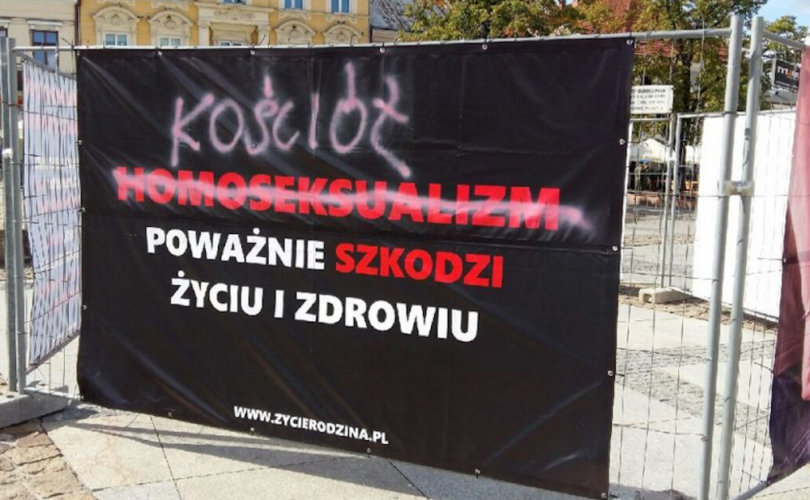 WARSAW, Poland, January 6, 2017 (LifeSiteNews) — Two participants of the highly publicized pro-abortion “Black Protest” in Poland were sentenced and fined for destroying the “Stop Deviance” banners of a pro-life group.

The Family and Life Group is a new and rapidly growing pro-life organization, known for its banners describing the medical, psychological, and social dangers of homosexuality. Their posters bear simple messages such as “Homosexuality is seriously harmful to life and health,” “Homosexuality = early death,” “On average homosexuals live 15-20 years less,” and “Most of them don’t live to be 65.”

In recent months, their “Stop Deviance” exhibit was displayed in seven Polish cities. And as a rule, it was attacked by the homosexual lobby and left-wing politicians and sympathizers.

The same happened in September 2016 when they put the exhibit in Kielce, a city in southern Poland. At night, the posters were sprayed with paint. In the sentence “Homosexuality is seriously harmful to life and health,” the word “homosexuality” was replaced by “the Church.” It surprised the organizers, whose campaign is not affiliated with a church.

When the pro-abortion and anti-government “Black Protest” came to town in October, the banners were already there. This time, the attack was even more violent. As Kaja Godek from the Family and Life told LifeSiteNews, two activists “demolished ‘Stop Deviance’ posters trying to apply homo-censorship and suppress the freedom of speech.” Local journalists filmed their actions and published them online, making it easy for the police to act.

The police recognized the attackers. Lawyers from the Ordo Iuris Institute for Legal Culture agreed to represent the organizers.

In early December, the court informed Godek that Konrad M. and Martyna K will pay 300 PLN each (approximately $70), and an additional 160 PLN (approximately $40) in legal costs. Godek explained that because the protesters could still appeal the judgment, Polish law protects their identity and the full names cannot be published yet. The verdict in another case involving three additional violent protesters will be handed down January 13.

Godek believes the assaults on her organization are politically driven. She said the attackers are connected to the new ”Together” party. Created in 2015, this radical left party did poorly in the 2015 election, receiving less than 4 percent of the national vote. As the local newspaper Gazeta Wyborcza reported, Together, along with the Committee for the Defense of Democracy (KOD), demanded the “Stop Deviance” be taken out in Kielce.

When Gazeta Wyborcza asked Kielce mayor Wojciech Lubawski about the exhibit, he said he has no intention to take it down. “The organizers take responsibility for this exhibit. We cannot be Solomon who decided what can be presented. It would be a risky decision.”

According to Lubawski, “Poland is a free country and we shouldn’t censor.”

As for the organizers of the “Stop Deviance” exhibit, they “plan to put it in as many towns as it can get invited to,” said Jacek Januszewski of Family and Life. “Everything we do is legal,” he added.

Commenting about receiving second place in a local “Failure of the Year 2016” competition organized by the leftist Gazeta Wyborcza, Godek said, “Show me your enemies and I will show you who you are.”