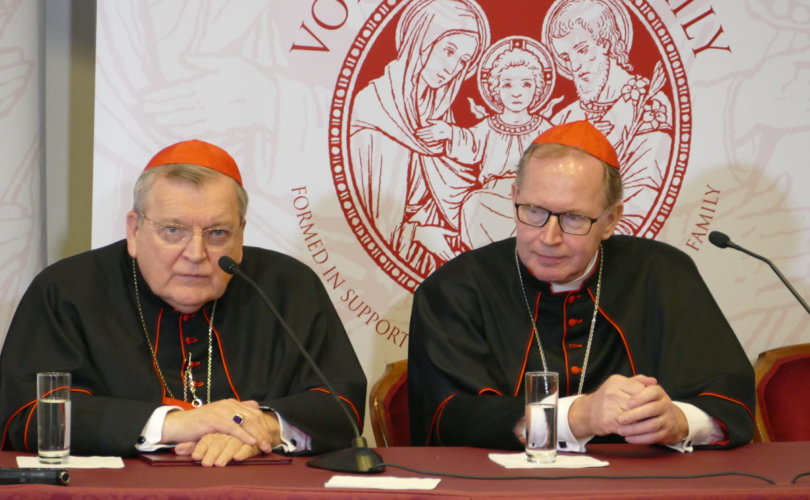 They included queries regarding the role of the Church in society; contraception; the European Union; patriotism; and migration, particularly mass migration of Muslims into Europe.

First, Cardinal Burke, the American former prefect of the Apostolic Signatura, answered a question on whether or not the common good requires all the countries in the world to recognize the authority of the Catholic Church in matters of faith and morals.

“What the common good requires is for each country to recognize the moral order,” Burke replied. “Specifically, the natural law which is taught in its fullest meaning in the Catholic Church, but this does not require a state religion.”

The American cardinal pointed out that the Catholic Church “does not insist on being the state religion even in countries where Catholics are the majority, but she does insist that the countries respect the moral law.”

Cardinal Eijk answered the second question: if married couples could use contraception according to an “internal forum,” as some have suggested for adulterous couples who receive communion without their irregular state causing scandal.

Eijk opposed the idea, saying that he had contributed to a book written by 11 cardinals who opposed the thesis that divorced and irregularly married couples could receive communion.

“Marriage is a total gift of man and wife, and when you break that gift, you are not in a right disposition to give yourself to Jesus or to receive Him totally … in Communion.”

He argued that the use of contraception blocks the total mutual gift of man and wife to each other “because man is a unity of soul and body.” The expression of the mutual life at the physical level should always be open to the gift of procreation.

“You block this gift at the physical level, you block the totality of the gift of husband and wife to each other.”

Eijk said that couples who use contraception should stop, go to confession, and sincerely repent, which means having a “sincere intention” of not using it again,

The third question, answered by Cardinal Burke, related to the suggestion that the European Union has lost its original role and become a platform for one-world government, replacing Christian values with worldly values. Is there “a Catholic duty to resist the hegemony of the European Union” and instead build a union of Christian patriots and sovereign nations?

Burke agreed that that the European Union has departed from its original vision, as Cardinal Pujats said earlier, and said Catholics do have the duty “within the European Parliament to bring the Union back to the original vision and certainly to oppose anything that would be contrary to the moral law.”

He also answered the fourth question, regarding the current German chancellor’s redefinition of patriotism. Angela Merkel stated in November 2018 that “patriotism is only good if it achieves win-win situations with other nations.” Apparently, all else is “nationalism” to her.

The American cardinal pointed out that some “other nations” are immoral. He described Merkel’s concept as a “strange idea” and said patriotism has to do with respecting God as the source of authority for those who govern, and citizens respect that authority as coming only from God.

Eijks answered the fifth question, prefaced with a suggestion that the Church had lost an internal battle regarding the ban on contraception when Paul VI did not fight back against bishops who dissented from Humanae Vitae. Could the edict against contraception be declared infallible?

The Dutch cardinal, while underscoring that the use of contraception is an intrinsically evil act and noting that the non-reception of Humanae Vitae was the first time so many bishops failed to support papal teaching, answered that it would not be appropriate to make an infallible statement about a moral teaching. Formal infallible declarations of faith are used only when there is some element of uncertainty of faith in a dogma. But there is “no doubt to the infallibility of Church teaching on contraception.” The Church has always, “from the beginning,” rejected the use of contraception.

Burke was asked the sixth question: how parents can foster patriotism in their children. He replied that they should do this by instilling in them respect for moral law. He added that families need to give their children the Christian culture that allowed their families to thrive. The cardinal recommended the book Nostalgia by Anthony Esolen, who said children who grow up without an identity become completely disoriented.

The seventh question, also answered by the American cardinal, was how immigrants can  respect the cultural and spiritual heritage of their new country if that new country is “spiritually bankrupt.”

Burke added that another problem is that “Christians are not reproducing themselves. They’ve entered into the contraceptive mentality.”

“This is where the … Church must come in, in ministering to immigrants, mainly to point out to them what is bankrupt in the culture and to try to work, even with the help of immigrants, to recover what is true culture: namely that which is based on respect for the inviolable dignity of every human life, respect for the integrity of the sexual nature of man, of marriage and its fruit, the family, and man’s worship of God.”

The final question, answered by the American cardinal, concerned the morality of resisting “large-scale Muslim immigration.” Burke responded that, given the opportunism of many economic migrants, the hopes for world domination inherent in Islam, and the dangers of extra-legal Muslim enclaves in host countries, resisting large-scale Muslim immigration is a “responsible exercise of one’s patriotism.”