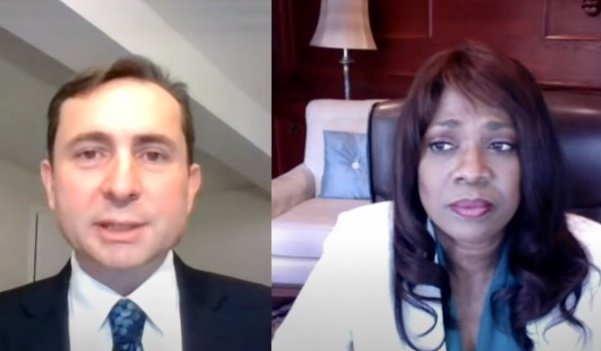 Dr. Leslyn Lewis (right), a candidate in the leadership race for the Conservative Party of Canada, reaffirmed her strong pro-life stance during an interview.YouTube screenshot

OTTAWA, May 15, 2020 (LifeSiteNews) – Conservative Party of Canada leadership hopefuls reaffirmed their commitment to the pro-life cause Thursday while speaking at the fourth day of the virtual National March for Life in Canada. The two official pro-life candidates on the ballot vowed that they would reopen the abortion debate in Canada should one of them be elected to lead the party.

Campaign Life Coalition’s (CLC) political operations director Jack Fonseca spoke Thursday with the two official pro-life candidates in the running for the leadership of the Conservative Party of Canada, Dr. Leslyn Lewis, and MP Derek Sloan. Fonseca also spoke with ousted pro-life candidate Jim Karahalios, who reaffirmed his commitment to life. The event took place virtually this year because of the coronavirus.

Sloan said he would allow a “full discussion” on “all aspects of abortion” in parliament.

In his interview with Fonseca, Sloan spoke about his 12-point pro-life plan, which includes a ban on sex-selective abortion, a ban on partial-birth abortion, freedom of conscience for healthcare workers, and review of the current euthanasia and assisted-suicide legislation.

In his closing remarks to Fonseca, Sloan voiced his support for the virtual marchers.

“Thank you all for what you are doing. You’re marching for those who are unable to march for themselves,” Sloan said.

“And your stand today is laying the foundation for this movement in Canada. Keep on marching. Courage can be costly, but compromise is fatal.”

Pro-life Conservative MP Sloan sparked a media frenzy for saying in a letter and video that Canadian Chief Medical Officer Dr. Theresa Tam should be fired for her coronavirus response.

In speaking with Fonseca, Lewis went over her promised pro-life initiatives that she would enact if elected leader. Lewis said she would ban coerced and sex-selective abortions, increase funding for pregnancy crisis centers, and end federal funding for international abortions.

“I believe in the sanctity of life, and that includes pre-born life,” Lewis said to Fonseca, adding that she thinks common ground can be found among Canadians on the issue of abortion in Canada.

Fonseca asked Lewis for her thoughts on euthanasia and assisted suicide.

“I oppose euthanasia, I feel that it is very important for us to honor the life especially of our seniors and those that are in palliative care,” Lewis said.

“They’ve given so much to our society, and I believe that we should give them back the love and comfort that they need in their last days. They should feel that during their last days they’re not a burden to society, and that’s why under my government I would invest in palliative care centers.”

Lewis also told Fonseca that if Bill C-7 passed she would repeal it as leader. Bill C-7 was introduced in February and would further expand Canada’s euthanasia laws. Euthanasia was legalized in Canada by pro-abortion Prime Minister Justin Trudeau's Liberal Party in 2016 with Bill C-14.

Bill C-7 came about as Trudeau's acceptance to a Quebec court decision in September. That ruling struck down the requirement that a person’s “natural death be reasonably foreseeable” to qualify them for death by lethal injection.

Lewis concluded her interview with Fonseca telling him the reasons she is running for the party leadership.

“I want to change the discourse in our democracy from one that demonizes people who hold different beliefs to a system that is truly meant to be, a system where we can have healthy debates about issues like life issues including euthanasia and abortion,” Lewis said.

“I also believe that members of parliament should be able to vote their conscience freely on moral issues. I also believe that we can restore our democracy to a point where it respects people like you and me and respects our rights and our belief that life is sacred.”

Fonseca also interviewed ousted conservative leadership Candidate Jim Karahalios, who shared his thoughts on why he thinks he was ousted from the leadership race, and what he would do if elected leader.

“If they can remove me in the middle of a leadership race when I’m in third place, what’s the hope for any blue conservative or pro-life conservative to run in a nomination in the future again. They will just deny anyone who has the courage to speak up,” Karahalios said to Fonseca.

Karahalios said he would end abortion funding oversees and let all MPs vote their conscience on social issues. He also vowed to protect the conscience rights of healthcare workers and vowed to put forward a concerted effort to ensure that Supreme Court judges are strict “interpreters'' of the law with no hidden agendas.

He thanked all the pro-lifers who supported him, saying, “Don’t give up hope and fight for a better future.”

According to Karahalios, the party disqualified him because of a complaint filed by the Erin O’Toole campaign requesting his disqualification. In early March, he sent an email with the title, “Say NO to Shariah Law. Stop Erin O’Toole.” O’Toole, an Ontario MP, complained publicly that Karahalios was a “racist” for this email.

Karahalios launched a lawsuit against the Conservative Party of Canada for what he called an “unlawful” disqualification during the campaign. He would like to be reinstated in the leadership race. His trial took place today, with a ruling expected to be known soon.

All three interviews can be viewed (interviews start at the 1:27:36 mark) on the March For Life Canada’s YouTube page as part of the day four virtual march.

O’Toole and former Nova Scotia MP Peter MacKay, along with Lewis and Sloan are the four official candidates in the race to replace current Conservative Party leader Andrew Scheer.

The Conservative Party’s Leadership Election Organizing Committee (LEOC) set an August 21 date to end the race. Party members will be voting via mail-in ballots, which will be sent out to members in July.

CLC urges all social conservatives age 14 and older to purchase a Conservative Party membership to be eligible to vote for the new leader. The deadline to register is today, May 15, at 11:59 p.m. ET.