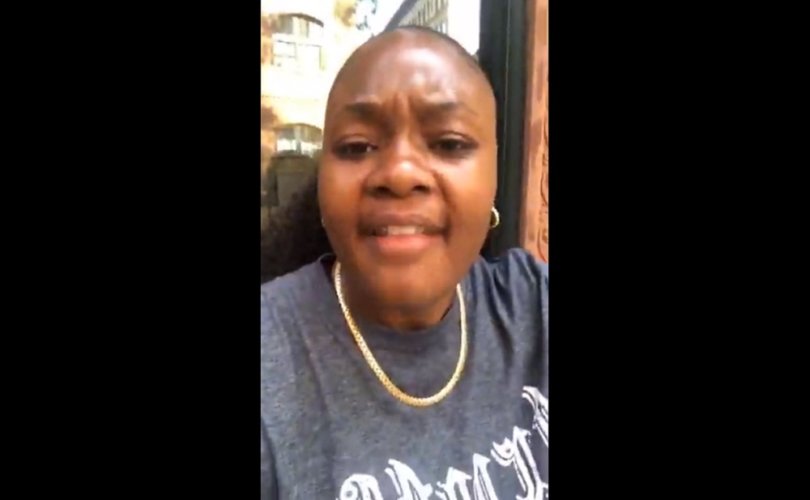 NEW YORK CITY, June 9, 2020 (Live Action News) — The Margaret Sanger Center Planned Parenthood on Bleecker Street in Manhattan is infamous to pro-lifers because of the danger it poses to women. This Planned Parenthood has a history of injuring women and does not have a safe exit in place for women who need to be transported to a hospital following botched abortions. The facility’s elevator can’t properly fit gurneys, and injured women have had to be removed by wheelchair and transferred to gurneys before being loaded into waiting ambulances. In a medical emergency, every second matters.

Two pro-life activists, Bevelyn Beatty and Edmee Chavannes, were outside of the abortion business on May 30th as they have been numerous times in the past, reaching out to women who are entering to obtain abortions. They always arrive early, to be the first ones at the doors before the Planned Parenthood volunteers arrive, so they can secure their spot on the public sidewalk. On this particular day, according to Beatty and Chavannes, barricades had been obtained by Planned Parenthood and placed on either side of the entry door to the building in an attempt to disrupt the women’s pro-life activism. However, Beatty and Chavannes refused to let this stop their outreach.

On Saturday, there were no Planned Parenthood volunteers present because of COVID-19, but the security guard wore a volunteer vest and stood outside to escort women to the entryway. Planned Parenthood called the police, who arrived and told Beatty and Chavannes that they had to leave because of COVID-19 social distancing guidelines, in place through executive orders from New York Governor Andrew Cuomo and New York City Mayor Bill de Blasio.

“[Planned Parenthood is] not following social distancing, mind you — the person I’m standing with I actually live with so we don’t need to follow social distancing. But the police were saying we were violating social distancing and the only ones that are supposed to be there are the ones that work there,” Beatty told Live Action News. “And we told them we’re not moving because it’s a public sidewalk and we have a right to be there. They could be there because they work for Planned Parenthood, but we work for Jesus so as long as this is a public sidewalk, we can be here.”

After refusing to leave, the police arrested the two women, who were issued a summons for failure to disperse. They are due in court on September 25, 2020.

While it is illegal in New York to block the entry of abortion businesses, neither woman was doing so in this case, as can be seen in the video above. Beatty said they weren’t protesting or picketing, but were counseling women.

“We’ve been at that clinic for a while standing for children’s lives and bringing the gospel to these women because they need help just as well as the babies. And we feel COVID has been used strategically to push a bias against abolitionists,” said Beatty. “We’re pro-life but we’re abolitionists. We feel like it’s just another reason Mayor de Blasio and Governor Cuomo can just push this agenda because the reality is this: How is abortion essential? How are stores closing and we can’t have Red Lobster and we can’t go to church or fellowship but you can still go and kill a baby?”

Beatty expressed concern that while she is being arrested for standing up for the lives of babies and women, looters are currently getting away with stealing. She believes there is an opportunity in place right now for the Church to “wake up” and realize that abortion is “a biblical issue,” and the Church needs to take a stand for life.