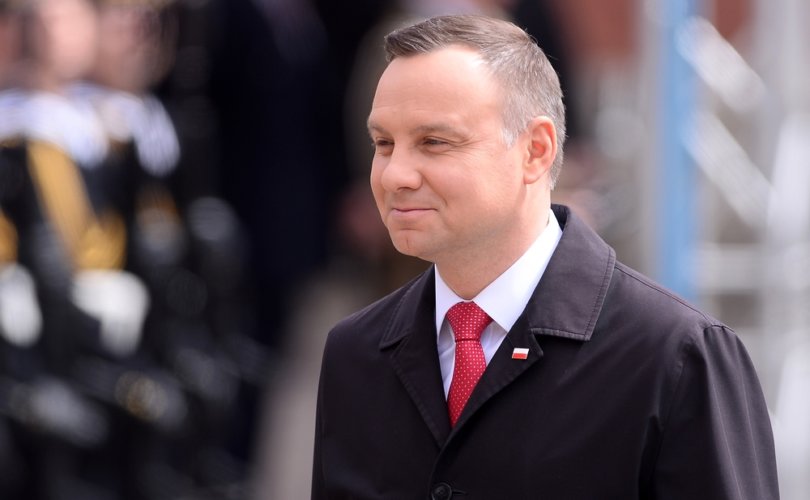 WARSAW, Poland, November 2, 2020 (LifeSiteNews)  ― Poland’s president has suggested an abortion bill that would allow for the direct killing of unborn babies diagnosed with fatal illnesses.

On Friday, President Andrzej Duda disappointed his nation’s pro-life movement by offering a compromise on abortion after Poland’s Constitutional Tribunal ruled that abortion for reasons of “fetal defects” was unconstitutional. A week after tens of thousands of protestors, led by Poland’s far-left abortion movement, began taking to the streets, Duda proposed a law that would permit the killing of unborn babies expected to die of natural causes before or soon after birth.

According to online English-language Polish news magazine Polandin.com, Duda stated: “In the wake of consultations, I have decided to submit an amended bill on family planning, protection of the human foetus and conditions allowing for the termination of pregnancy to the Lower House.”

The new bill, Duda said, “while recognising the Constitutional Tribunal’s guidelines, envisages the introduction of a new provision that reinstates the possibility of the termination of pregnancy in line with Poland’s Constitution and only when the so-called lethal defects appear, when prenatal and other medical indications show a high-risk of stillbirth or the child being afflicted with an incurable disease or defect leading to the unavoidable and imminent death of the child despite the treatments applied.”

Previously the Polish president had maintained that he had always been in favour of banning eugenic abortion.

Duda’s proposal met with disappointment from pro-life Poles and contempt from its radical pro-abortion movement.

Leading Polish pro-lifer Kaja Godek, the mother of three children, one with Down syndrome, told LifeSiteNews that Duda’s bill brings eugenic abortion back to Poland and betrays the Polish constitution.

“The President's proposal is nothing else than restoring eugenics in the bill,” Godek stated via email.

“The [presidential]oath says that he should guard the constitution, yet he is now trying to ignore the verdict by the Constitutional Tribunal,” she continued.

“Mr. Duda will be remembered as the only Polish president who took action to weaken the protection of life, even [Communist-era] presidents did not do so.”

Krystian Kratiuk of online Catholic newsmagazine Polonia Christiana told LifeSiteNews that the abortion movement has not been placated by the president’s proposed compromise.

“They are not satisfied,” Kratiuk stated via email.

“They will absolutely not accept it. For them it [represents] acompromise that they have not accepted for a long time. They now want the resignation of the government, forbid the Church all the money it receives from the state [through a voluntary tax], abolish the public media and have an abortion on request,” he continued.

“This is how they negotiate, and yet we have three years until the election!”

Kratiuk explained that the Polish Church receives tax money as reimbursement for property stolen by the former communist regime, for repairs, in exchange for religion lessons in schools, and to subsidize some ecclesiastical universities.

Legal abortion was first introduced in Poland in 1932, allowable when continuing the pregnancy endangered the mother’s life or when the child was conceived through rape or incest or by a girl under 15. During the German occupation of the Second World War, abortion on demand was introduced as the Nazi regime wished to decrease the native Polish population, most of which it regarded as “sub-human”.

“I will personally shoot the idiot who would introduce legislation prohibiting abortion in the eastern occupied territories,” said Adolf Hitler.

During the Moscow-controlled Communist era, Polish abortion laws permitted abortion for women because of “difficult life conditions.” However, a movement to create Polish legislation giving greater protection to the unborn child began even before the end of the Communist regime.

The 1993 legislation protected the lives of all unborn children except those whose lives threatened the health and safety of their mothers, those conceived through a criminal act like rape and incest, and those who were diagnosed with a “severe” disability or fatal disease. President Duda stated on Friday that the amended abortion law would still provide the exceptions for the life and health of the mother and for conceptions caused by criminal acts.

Infuriated by the October 22 Constitutional Tribunal’s ruling, some pro-abortion activists in Poland have resorted to screaming obscenities in the streets, vandalizing churches and patriotic monuments, assaulting people, and even invading churches to interrupt divine worship.

Last week LifeSiteNews’s John-Henry Westen and other pro-life leaders in the English-speaking world extended their congratulations to Poland for the decision against eugenic abortion and regret for the violence of some pro-abortion demonstrators.

“We… assure our brothers and sisters in the Polish pro-life movement that we have not forgotten them,” Westen said.

“Nie jesteściesami:you are not alone! We are with you. We are praying for you. We thank you for what you have done for unborn children and for your traditional Catholic culture.”

Westen’s message was soon translated and republished by several Polish news outlets, including Polonia Christiana, Nasz Dziennik (“Our Daily”), Do Rzeczy (“Straight to the Point”), and Radio Maryja.