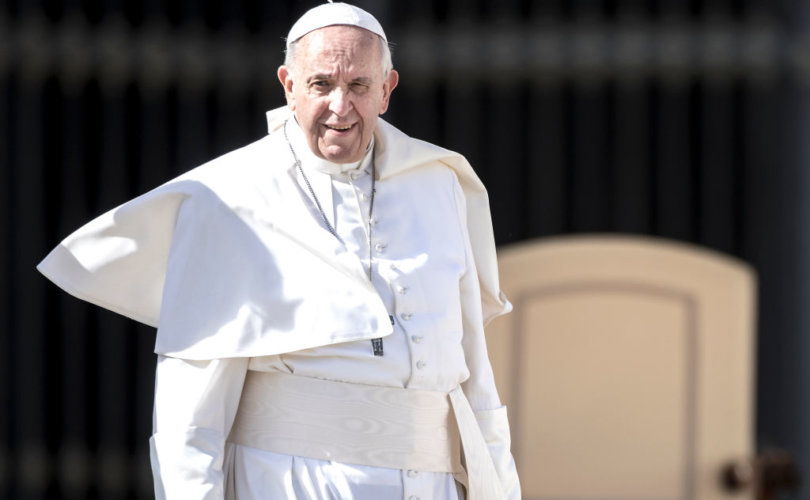 In a video-message delivered this week to the 7th World Congress Against the Death Penalty, taking place at the European Parliament in Brussels from February 27 – March 1, Pope Francis hardened further his opposition to the death penalty, once more seeming to imply that this is always and everywhere wrong, contrary to Catholic teaching prior to his pontificate.

Addressing conference organizers and participants on Wednesday, the Pope argued that the death penalty is “a serious violation of the right to life that every person has.”

“Human life is a gift we have received, the most important and primary, source of all other gifts and all other rights. And as such it needs to be protected,” he told conference participants. “Moreover, for the believer the human being has been created in the image and likeness of God. But for believers and non-believers alike, every life is a good and its dignity must be guarded without exception.”

The Church has always defended life, and her vision of the death penalty has matured. For this reason, I wanted this point to be modified in the Catechism of the Catholic Church. For a long time the death penalty was taken into account as an adequate response to the gravity of some crimes and also to safeguard the common good. However, the dignity of the person is not lost even if he has committed the worst of crimes. No one can be killed and deprived of the opportunity to embrace again the community he wounded and made suffer.

He called the goal of abolishing the death penalty worldwide a “courageous affirmation of the principle of the dignity of the human person” and of “the conviction that humankind can face crime, as well as reject evil, by offering the condemned person the possibility and time to repair the damage done, think about his action and thus be able to change his life, at least inwardly.”

“It is in our hands to recognize each person’s dignity and to work so that no more lives are taken away but are won for the good of society as a whole,” he said.

Renowned Catholic philosopher Edward Feser, Associate Professor of Philosophy at Pasadena City College in Pasadena, California, is one of the foremost contemporary writers in the Thomistic tradition, and a leading expert on the Church’s teaching on the death penalty.

He is the author of such works as The Last Superstition, Scholastic Metaphysics, Five Proofs of the Existence of God, By Man Shall His Blood Be Shed (with Joseph Bessette) and the forthcoming Aristotle’s Revenge.

By Man Shall His Blood Be Shed is a study and defense of the perennial Catholic teaching on the death penalty as legitimate in principle and often advisable in practice even in contemporary social conditions.

In comments to LifeSite, Feser said: “For the most part, Pope Francis’s latest statement on capital punishment just repeats things he has said before, but there is one element that is not only new but possibly even more problematic than his previous remarks.”

“The Pope says that the death penalty is ‘a serious violation of the right to life that every person has,’” Feser noted. “That obviously gives the impression that capital punishment is a species of murder, and thus always and intrinsically evil rather than wrong only under modern circumstances.”

“And that claim would flatly contradict scripture, the Fathers and Doctors of the Church, and every pope who has spoken on this subject prior to Pope Francis,” he added.

To take just one example, Pope Pius XII explicitly said that a murderer “has deprived himself of the right to live,” so that the state does no wrong in executing him.  Francis seems to be directly contradicting Pius XII, as well as, again, other popes such as St. Innocent I, Innocent III, St. Pius V, St. Pius X, and even St. John Paul II, who acknowledged that capital punishment can at least in rare cases be legitimate.

The co-author of By Man Shall His Blood Be Shed continued:

The First Vatican Council solemnly taught that popes have no authority to invent new doctrines, even when speaking infallibly, and the Second Vatican Council solemnly taught that the Church is the servant of scripture and not its master. Yet the Pope’s remark appears to be a new doctrine and one that contradicts scripture. Popes sometimes make such doctrinally problematic statements when not speaking infallibly, though it is extremely rare.  The best known cases are Pope Honorius I and Pope John XXII.  John XXII recanted his erroneous teaching on his deathbed, whereas Honorius was condemned by his successors.

Comments from a Dominican theologian

An anonymous Dominican to whom LifeSite spoke worried about the consequences for all doctrine and the Church’s teaching authority in light of the approach Pope Francis is taking to the death penalty.

Countering the Pope’s claim that the death penalty is an intrinsic offense against human dignity, the Dominican theologian argued: “Capital punishment does not ignore what remains of human dignity in the criminal, nor does it deprive him of his opportunity to repent. It takes his dignity seriously by inviting him to recognize the gravity of his crime.”

“It arguably makes repentance more likely by concentrating his mind on the thought of his imminent death,” he said.

Readers will recall that, last August, two weeks after Pope Francis ordered that the teaching on capital punishment in the Catechism of the Catholic Churchbe revised, a group of 75 clergy, lay scholars and prominent public intellectuals took the unprecedented step of issuing an open appeal to the College of Cardinals, urging them to tell Pope Francis to teach the authentic Catholic doctrine on the death penalty.

Titled An Open Appeal to the Cardinals of the Catholic Church, the letter was published in First Things.

Its 75 signatories include Fr. George Rutler and Fr. Gerald Murray of the Archdiocese of New York, respected theologian and writer, Fr. Brian Harrison, and Fr. Andrew Pinsent, a physicist and member of the Faculty of Theology and Religion at Oxford University.

Also numbered among the signatories are professors of philosophy, theology, law, and history from Catholic institutions across the globe, including Edward Feser and Joseph Bessette, noted authors of By Man Shall His Blood Be Shed: A Catholic Defense of the Death Penalty (Ignatius Press, 2017).

Recalling the scholars’ appeal last August, the theologian said in comments to LifeSite: “It is urgently necessary that the cardinals respond to the appeal that was made to them last year to advise the Pope that he must put an end to this scandal and teach the word of God, not his personal opinions.”

Perspective from a Catholic historian

A British Catholic historian based in the United States has also questioned the defensibility of the Pope’s latest statement on the death penalty.

Dr. Alan Fimister is an Assistant Professor of Theology and Church History at St. John Vianney Theological Seminary in Denver, and Director of the Dialogos Institute, which encourages debate on legitimately disputed theological questions among Catholics.

In comments to LifeSite, Dr. Fimister suggested that, taken in a certain in way, Pope Francis’s judgement may not be contrary to Catholic teaching, but noted the judgment is not his to make.

Fimister explained: “In order to employ the death penalty two conditions must be fulfilled: the criminal’s offense must be sufficiently grave to deserve death, secondly the application of the death penalty must be necessary to defend human life.”

The Catholic historian further noted: “The infliction of grave and irreparable harm on a victim of crime always undermines the rule of law and thus public safety, because the temporal power cannot adequately redress the harm with non-lethal measures. It is in these circumstances that the two aforementioned conditions are usually fulfilled. The Roman Catechism mentions in this regard murder and rape:

The just use of this power, far from involving the crime of murder, is an act of paramount obedience to this Commandment which prohibits murder. The end of the Commandment is the preservation and security of human life. Now the punishments inflicted by the civil authority, which is the legitimate avenger of crime, naturally tend to this end, since they give security to life by repressing outrage (i.e. rape) and violence (Roman Catechism on the fifth Commandment).

“It is because both these conditions are required that society historically has not executed all criminals guilty of capital offences,” he added.

Commenting on the Pope’s video-message, Fimister told LifeSite: “Clearly Pope Francis does not consider the second of the conditions (i.e. that the application of the death penalty is necessary to defend life) to be fulfilled at this time.”

“As an individual he is obviously entitled to make that judgement, but it is the laity — who properly wield the temporal power — to whom that judgement belongs in an official capacity,” he noted.

“To seek to take that judgment from them is a form of (no doubt inadvertent) clericalism,” he said.

Dr. Fimister said what is more “theologically problematic” is “the denial that the death penalty is legitimate in principle, for to make this assertion would be contrary to the unbroken teaching of the Church from Scripture all the way down to Benedict XVI.”

“Insofar as Pope Francis’s words are open to this interpretation that is unfortunate,” the Catholic historian said, adding: “When people, even clerics, feel strongly about political questions of great moment they often omit to distinguish clearly between matters of principle and prudential (but very important) considerations.”

Can Pope Francis’ Death Penalty Teaching be Harmonized with Scripture and Tradition?

Sawing off the branch on which he sits: Experts question Francis attack on popes over death penalty