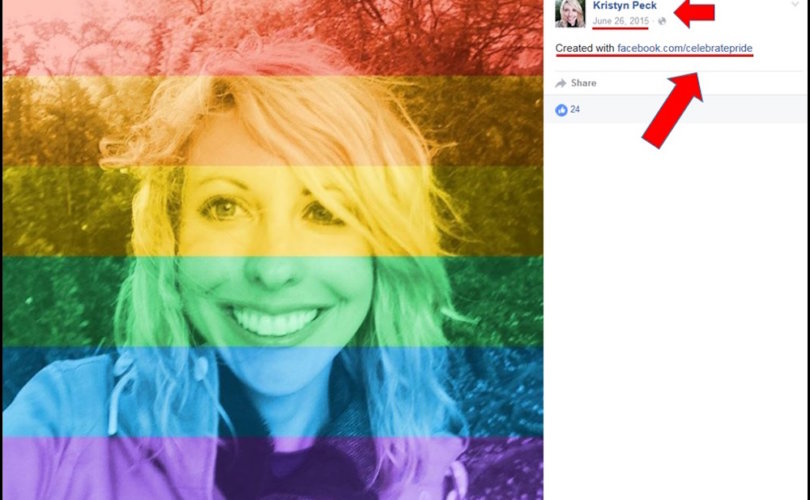 The latest report, issued Tuesday, involves Kristyn Peck, an official of the United States Conference of Catholic Bishops’ Office of Migration and Refugee Services, and Michael Wynne, an IT professional at Catholic Relief Services (CRS).

Both Peck and Wynne have used social media to advocate same-sex “marriage.”

LifeSiteNews contacted both employees, along with USCCB and CRS leadership, to ask about their views on the issue and their effect on employment at a Catholic institution, but did not hear back from either staff member or Catholic Relief Services before press time. The USCCB told LifeSiteNews it does not discuss personnel issues with media.

Lepanto Institute President Michael Hichborn told LifeSiteNews that he did not receive a response from either CRS or the USCCB about their employees’ public support for homosexual “marriage.” But he said that within 12 hours of the inquiries being sent, the information he’d found on the two staffer’s social media profiles had been removed.

He captured the posts, however, and included them in the Lepanto report, which also includes a reprint of communication with the USCCB and CRS offering time for their response prior to publishing.

Hichborn told LifeSiteNews his organization’s objective in issuing the report was the salvation of souls and fidelity to the Church in an age of rampant dissent from Church principles. “The only goal of the Lepanto Institute is to help the clergy and the faithful recognize just how serious and pervasive the problem truly is,” he said.

Upon seeing that a USCCB staffer had viewed his profile, Hichborn looked at Peck’s LinkedIn profile, where he learned of Peck’s role as Associate Director of Children's Services for the Children and Migration Office in the USCCB’s Department of Migration and Refugee Services (MRS).

Hichborn went on to discover that Peck had celebrated the US Supreme Court’s June 2015 Obergefell ruling redefining marriage by using the homosexual movement’s “Celebrate Pride” application to install its signature rainbow image on her Facebook profile. Peck had also posted a rainbow image with the pro-homosexual “marriage” “LoveWins” hashtag celebrating the Obergefell decision.

While much of what Peck posts on her Facebook page is hidden from public view, Hichborn said, what was shown is enough to indicate support for things that are not in line with the teachings of the Catholic Church.

After coming across Peck’s information, Hichborn made the decision to report as well on the second employee, CRS Systems Analyst Michael Wynne, brought to Hichborn’s attention by an earlier anonymous tip from within CRS on an employee believed to be in a homosexual relationship and promoting same-sex “marriage” on social media.

It didn’t take long to see that Wynne is actively promoting same-sex “marriage,” Hichborn pointed out.

“And it should be noted and made abundantly clear that he is doing so while publicly identifying himself as an employee of Catholic Relief Services,” he continued. “In other words, his public support for same-sex ‘marriage’ is attached to his public identification with an agency of the Catholic Church.”

Wynne identifies himself as a CRS staffer on both LinkedIn and Facebook, where he also advocated homosexual “marriage” with posts of the homosexual movement’s red and pink “equals” symbol in support of gay “marriage,” and mention of support for “marriage equality.”

Wynne had also used the “Celebrate Pride” application to install the rainbow on his profile after the Obergefell decision over a photo of him with his mother and male partner, and his profile showed numerous “likes” of pro-LGBT organizations, as well as his having been a member of a gay men’s chorus.

The US Bishops’ relief agency has long been the focus of concern over its partnership with groups and organizations that promote anti-Catholic issues, including abortion, contraception and homosexual behavior.

The Lepanto Institute reported earlier this year about the then-editor-in-chief of Catholic News Service, Tony Spence, publicly supporting the transgender agenda. Spence later resigned at the request of the USCCB’s general secretary, while blaming the media outlets that had reported on his social media posts.

And last year, the Lepanto Institute reported on CRS Vice President of Overseas Finance Rick Estridge’s use of social media to support views contravening Church teaching while himself having entered into a homosexual “marriage.”

CRS did not respond to LifeSiteNews’ inquiries on the matter at the time, nor act immediately after the news surfaced. CRS President Carolyn Woo told another media outlet a month into the scandal the agency was still determining whether it was wrong to have a senior staffer in a gay “marriage.”

Weeks later Estridge stepped down amidst CRS making a statement that there were no issues with its Catholic identity and criticizing those who had brought the information regarding Estridge to light.

Hichborn told LifeSiteNews the current problem of Catholic agencies contradicting the Church’s moral teachings represents the cultural war of our time, and it illustrates the need for prayer and the intercession of the Blessed Mother.

“Today, the world is in a grave moral crisis,” stated Hichborn. “Western Civilization is on the brink of a moral implosion as pagan practices, beliefs and laws are seizing the reigns. Heresy and immorality have infested nearly every hall of the Church.”

“But as was the case so many times before, Holy Mother Church provides the means to end the crisis,” he said, “and in many cases, the solution has been found in praying the Rosary, and so it is through prayer that Our Lady's Immaculate Heart will triumph.”