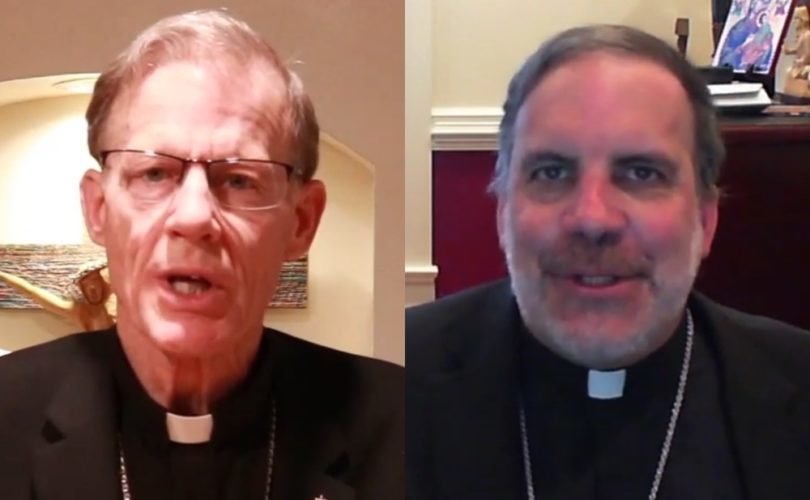 April 9, 2021 (LifeSiteNews) — A U.S. Catholic archbishop along with a bishop and several priests joined up with the pro-LGBT Human Rights Campaign in releasing an April 1 letter affirming “transgender individuals” — men who claim they are women and women who claim they are men — while calling for an end to the “epidemic of violence” that they say such individuals face.

“We, Bishops, religious and lay leaders of the Roman Catholic Church join with the Human Rights Campaign in calling for an end to the epidemic of violence against transgender individuals,” states the letter signed by Santa Fe Archbishop John Wester and Bishop John Stowe of the Diocese of Lexington.

At no point did the bishops call for an end to the extreme violence that men and women inflict on themselves in vainly attempting to become members of the opposite sex, including cutting off breasts, removing the male organ of reproduction, removing a woman’s womb, attaching fake reproductive organs, and injecting themselves with a barrage of hormones that deceive the body into acting like a member of the opposite sex. At no point did the letter call for more help to be provided for individuals who struggle with accepting the truth of their male or female body.

“We are commanded to respect the full dignity and humanity in every individual, and to be people of justice, mercy and compassion,” the letter signed by the bishops states. “That we might not understand an individual’s experience, does not mean we are to discriminate against them, nor tolerate any form of discrimination they might endure.”

The letter appears to equate the acceptance of the claim that a man can become a woman with the “defense of human dignity.”

“The defense of human dignity is one of our highest callings of our baptism, and we we [sic] are empowered by the Holy Spirit to do all that is necessary to end discrimination and violence,” the letter states.

It concludes with the insinuation that the delusion some men experience in thinking they are really a woman trapped in a male body is part of God’s creation.

“St. Bonaventure wrote that, ‘we are led to contemplate God in [all creation].’ This is no less true of our transgender sibilings [sic]. Transgender people have always been members of our local parishes and the witness of their lives has leads [sic] us to greater contemplation of God and the mystery of our faith. To our transgender siblings, may you always know that the Image of God resides in you, and that God loves you,” the letter states.

The Catholic Church teaches, however, that the male and female sexes, man and woman, are biological realities willed and created by God. The view is backed by science which conclusively shows that the sexual difference between men and women exists in genetics, endocrinology, and neurology. Even from the very first moment of conception male cells containing XY chromosomes differ from female cells containing XX chromosomes.

The 2019 Declaration of Truths put out by several prominent Catholic bishops along with a cardinal states that it is a “rebellion against natural and Divine law and a grave sin that a man may attempt to become a woman by mutilating himself, or even by simply declaring himself to be such, or that a woman may in like manner attempt to become a man, or to hold that the civil authority has the duty or the right to act as if such things were or may be possible and legitimate.”

Alphonso David, president of the Human Rights Campaign, said regarding the letter signed by Wester and Stowe that Catholic voices are “critical” in securing “transgender rights.”

“The life-threatening violence against the transgender community, spurred by discrimination and hate, is a moral issue and one in which the voices of Catholic leaders are critical to the safety of our transgender siblings,” he said in a press release. “This is a critical moment to come together united, propelled by our faith, and lift our voices to unequivocally say that transgender rights are human rights, and they must be protected.”

Wester and Stowe have a history of pushing the normalization of homosexuality within the Catholic Church. Earlier this year, they joined Cardinal Joseph Tobin of the Archdiocese of Newark and a few other bishops in signing a statement in partnership with the pro-homosexual Tyler Clementi Foundation in support of young people who identify as LGBT, telling them that “God is on your side.”