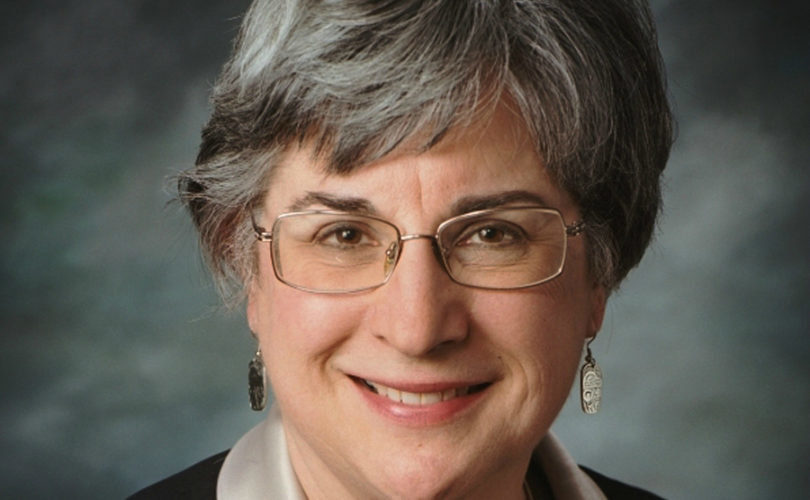 'To suggest that some 'emergency' or 'special situation' would permit a person in conscience to use contraception does not align with Catholic moral theology," said Professor Janet Smith (pictured).

February 22, 2016 (LifeSiteNews) — Among the many reactions to Pope Francis’ interview on the return flight from Mexico last week are the thoughtful reflections of two female theologians of note. Both Professor Janet Smith, who holds the Father Michael J. McGivney Chair of Life Ethics at Sacred Heart Major Seminary in Detroit, and Dr. Monica Miller, a Ph.D. in Theology from Marquette University and Director of Citizens for a Pro-Life Society, took up Pope Francis’ answer to a question about the Zika virus, contraception, and the “lesser of two evils.”

When asked about the ‘avoiding pregnancy’ in areas at risk of Zika virus transmission, Pope Francis spoke of the supposed permission given by Pope Paul VI to nuns in Africa to use “contraceptives in cases of rape.”

“Don’t confuse the evil of avoiding pregnancy by itself, with abortion,” he said. “In certain cases, as in this one, or in the one I mentioned of Blessed Paul VI, it was clear.” The Pope also suggested that the question of “avoiding pregnancy” in Zika zones could involve a “conflict between the fifth and sixth commandment.”

Responding to a request from LifeSiteNews Dr. Monica Miller said:

It is interesting to note that the reporter never used the term “contraception”—only whether “avoiding pregnancy” was the “lesser evil.”  First, of all it is not necessarily an evil at all to avoid a pregnancy—as couples can certainly abstain from sex, or use Natural Family Planning when there is a serious reason to avoid pregnancy. Thus if the pope simply meant to say that the Zika virus threat was such a serious reason for couples to avoid pregnancy – with recourse to methods that are morally licit – the pope did not teach that there are circumstances when the use of artificial contraceptives can be morally licit.

However, the pope’s response is confusing, unclear and certainly people can come away from it thinking that His Holiness did endorse exceptions to the Church’s ban on the use of artificial contraception. Why? Because, number one—the reporter characterized “avoiding pregnancy” as an “evil”—albeit a “lesser evil” and everyone knows that the Church considers contraceptive use as a moral evil, whether they agree with that position or not.

Then Pope Francis made the statement that there was or could be a conflict between the 5th and 6th commandment—thus giving the impression that there was some kind of a moral quandary or tension between moral goods that perhaps can only be resolved by compromising with recourse to a “lesser evil” in order to secure or protect the greater good—in this case the good of life. It was a rather odd statement, and Catholic moral theology does not speak in terms of commandments being in conflict with each other. Then—when the Pope used the situation of nuns in the Belgian Congo being permitted to use contraception to thwart the effects of rape—the Pope certainly gave more than the impression that in difficult, crisis situations persons may licitly use artificial contraception—when indeed the Church is quite clear that such use is never morally licit as contraception violates the meaning of the conjugal act.

The problem, as usual is the use of imprecise language, improper characterizations of moral issues that lead to serious confusion. One has to wonder why the Pope did not immediately launch into an endorsement of Natural Family Planning as soon as he heard the reporter ask about the licitness of “avoiding pregnancy.” A missed teaching moment descended into confusion. Hopefully Pope Francis prays that prayer to Mary, the un-doer of knots—as there are a lot of knots here that need to be undone.

The (Principle of Choosing the Lesser Evil) PCLE does not justify a woman using contraception to prevent a pregnancy because she fears the child may suffer some harm during the pregnancy. Here a woman is choosing to do something immoral to prevent harm. This choice violates the fundamental principle that we must never do moral evil to achieve good. She would be intending to thwart the purpose and meaning of the sexual act in order to protect any child conceived from harm, but she is doing harm—to the marital act and her marital relationship—by using contraception to prevent a pregnancy.

Conflict between the Fifth and Sixth Commandments

Let us also consider the claim that there might be a conflict between the Fifth (“thou shalt not kill”) and Sixth (“thou shalt not commit adultery”) Commandments that would justify the use of contraception. What is the risk of violating one of those commandments by honoring the other? Is the reasoning here that those who conceive, for instance, a child with microcephaly are responsible for a kind of “killing of the child”? That is, their honoring their marital fidelity by having sexual intercourse open to life puts them in a position of endangering the life of a child conceived (a violation of the Fifth Commandment?). Or, if they refrain from sexual intercourse in order to avoid putting the life of a child at risk, is there the suggestion that that refraining is a violation of some kind of the Sixth Commandment?

Moreover, spouses are not under an obligation to have sexual intercourse. If they believe their intercourse might lead to a problematic situation for which they are not prepared, they are free to abstain completely from sexual intercourse or abstain periodically. Spouses abstain for all sorts of reasons—because of physical separation, illness, and even such trivial reasons as a desire to watch sports on TV or to do the laundry. To abstain to avoid exposing a child to the danger of microcephaly would seem a respectable reason for abstaining.

These are some of basic principles that need to be kept in mind when assessing proposals to help women who live in areas where children conceived might contract lethal or disfiguring diseases. Contraception is not a moral solution. Use of a method of natural family planning is.