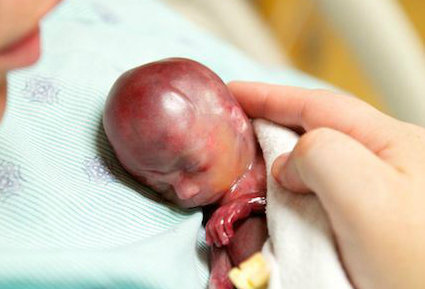 (LiveActionNews) – Two years ago the Fretz family’s world was forever changed when their baby boy was born too soon. At just 19 weeks and six days gestation, Lexi Fretz rushed to the ER in labor. Due to an incompetent cervix, she gave birth to Walter Joshua Fretz five hours later.

“I was crying so hard,” she writes. “He was fully formed and everything was there. I could see his heart beating in his tiny chest.”

Walter’s father, Joshua Fretz, quickly went to get his camera. He took photographs of his wife, Walter, and his daughters. Although Walter lived for only a few moments, the photographs are now eternally famous.

After Walter passed away and the Lexi was discharged from the hospital, she shared the photos and the story of their loss on Facebook. That’s when Walter’s short life was given a lifetime of purpose.

His photos and story went viral. E-mails and comments poured in, saying:

I have always thought it was a woman’s choice to abort a pregnancy! […] How wrong!!! I’m glad you chose to share your story and beautiful photos of such a sad time in your life as you’ve educated me!

I used to believe that there were reasons to justify some abortions. […] And now seeing Walter there lying on your chest brings me to shame for my former opinions.

[…] you have put my life into perspective. […] I’m keeping this baby. I’m carrying and I’m going to treasure him/her for eternity.

One woman, using her smartphone while in an abortion clinic, saw Walter’s pictures. She got up and left, canceling her abortion appointment and choosing life for her child.

“In all our hurt,” said Lexi Fretz, “I am glad that some good can come out of this. I pray that the Lord will continue to use Walter’s photos to impact many.”

Since losing Walter, the family has welcomed daughter number three to the family. Mia joined big sisters, Michayla and Emma, in the fall of 2014. A surgery at 13 weeks gestation allowed Lexi Fretz to carry Mia to term. Her sisters, devastated by the loss of their brother, were ecstatic to have a new baby to love.

While they still talk about Walter and miss him deeply, the family is humbled by the impact Walter has had on the world, and how he is showing everyone that preborn humans are not just “clumps of cells.”

On the two-year anniversary of his birth and death, his mother wrote on Facebook:

“Happy Birthday to my sweet Walter, Our time with you was incredibly short, our memories are few, but your impact on this world has been nothing short of amazing. I thank God for you every day and look forward to when I can hold you in my arms again!”