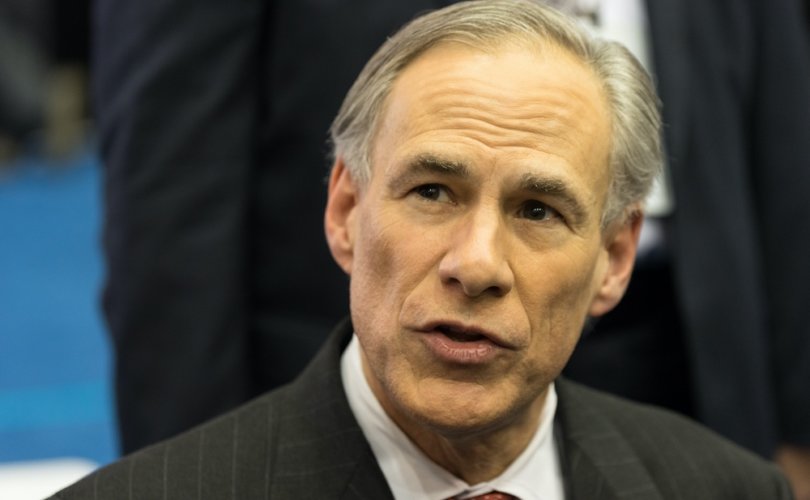 AUSTIN, Texas (LifeSiteNews) — Texas Republican Gov. Greg Abbott has rejected a proposal to add exceptions for rape and incest to the heartbeat-based abortion ban the Lone Star State enacted in early September, making clear the law’s purpose was to “protect every child with a heartbeat.”

Last week, Republican state Rep. Lyle Larson, who voted for the heartbeat law, introduced legislation to add rape and incest exceptions, claiming in a letter to Abbott it was a “common sense fix” to recognize the “reality” that “none of us have the power to prevent rape in this state.” He also cited feedback from constituents across the political spectrum who supposedly demanded the change.

“If that came to your desk, will you sign it or not?” Fox News host Chris Wallace asked Abbott in a Sunday interview.

“Well, we’ve go to go back to what the reason was why the law was passed in the first place. And the goal is to protect the lives of every child with a heartbeat,” Abbott responded. When pressed again, Abbott added, “you’re making a hypothetical that’s not going to happen because that bill is not going to reach my desk. But second, the goal is to protect every child with a heartbeat.”

In responding that Abbott “needs to rethink his decision,” Larson shared a headline from the far-left outlet Raw Story claiming that Abbott “allow[ed] 15,000 rapes” before signing the law, based on Wallace citing the number of Texas rapes in 2019. Wallace did not explain how Abbott supposedly “allowed” those rapes.

The Governor needs to rethink his decision today. Rape and incest are horrific and should be added.

Texas Right to Life legislative director John Seago has previously said the group “strongly opposes” Larson’s bill, because “creating loopholes and exceptions, where not all unborn children would be treated equally, violates our pro-life principles,” and would undermine the law’s purpose “to protect the most vulnerable among us from the violence of elective abortion.”

1
Pelosi receives Holy Communion at Mass presided over by Pope Francis
2
WATCH: John-Henry Westen, Michael Matt react to Pelosi’s Communion at Mass with Pope Francis
3
Pope Francis doubles down on restrictions of the Latin Mass in new letter
4
Princess Gloria: Global elites think they do good but actually serve the ‘prince of the world’
5
Record numbers of German Catholics are leaving the Church amid ‘Synodal Way’
Subscribe to Daily Headlines »