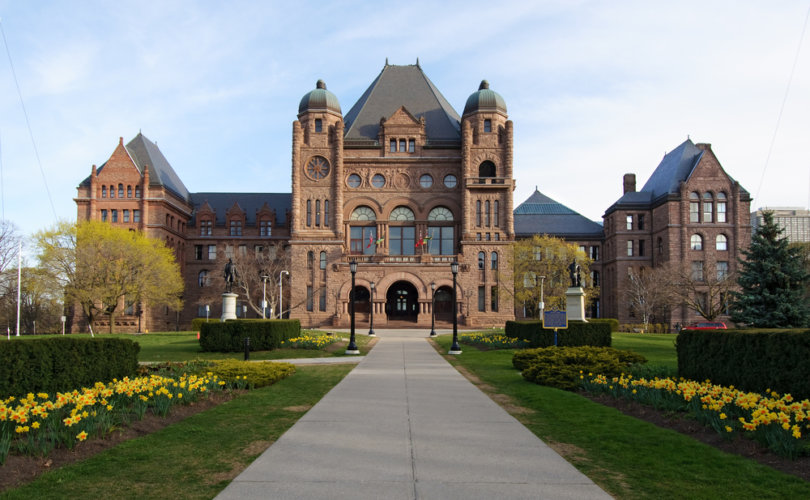 TORONTO, June 5, 2015 (LifeSiteNews.coms) – Not with a bang but a whisper, Ontario’s three political parties quietly collaborated to pass a bill abolishing the right of teenagers with unwanted homosexual or transgendered feelings from seeking psychotherapy.

Though it was framed as a human rights measure by its mover, Ontario New Democrat MPP Cheri DiNovo, Bill 77 is a “restrictive tyrannical bill that prevents children from getting the help they need and want with feelings and desires that are not welcome,” Clinton Somerton of Campaign Life Coalition said. CLC made a last-minute effort to get members to lobby their MPPs against it.

The Affirming Sexual Orientation and Gender Identity Act passed through the Ontario legislature like a knife through butter, with opponents either absenting themselves or sitting on their hands as it was approved on third (and final) reading on Thursday.

The bill makes it illegal to provide psychotherapy to minors for either homosexuality or gender dysphoria, and prevents the government from making such therapy for adults fundable by the Ontario Health Insurance Plan.

Two days before, National Post columnist Barbara Kay called the bill a “dangerous overreach” because politicians were deciding for psychiatrists what was treatable and what wasn’t. Demonstrating some symptoms of political correctness herself, Kay said that gender dysphoria was an illness often treatable when caught early, but efforts to treat homosexuality were “acknowledged by most mental-health professionals, including those at the GIS, to be ineffective and unethical” and could justifiably be banned.

DiNovo and proponents of a similar law passed in California claim they are banning “Conversion Therapy,” a treatment devised for sex offenders and homosexuals based on negative reinforcement such as electroshock, abandoned decades ago. But “Sexual Orientation Change Efforts” (SOCE) do not employ such primitive, invasive methods, but rely instead on conventional “talk” or cognitive therapy.  Following this approach, the therapist helps the client understand the psychological roots of his unwanted behavior or thoughts, which makes it easier for him or her to change them, if they wish.

Dr. Joseph Berger, an eminent Toronto psychiatrist, told LifeSiteNews when the bill was introduced several months ago that he had successfully treated several people seeking to overcome homosexual feelings. “One of them is now a grandfather. … I’m not saying they won’t have some homosexual feelings. But they have been able to live successfully as heterosexuals. And they are very upset and angry with those who claim they cannot change and have not changed.”

Berger called the bill “ill-advised.” Transgenderism is a classic delusion, he said, and society ought to help a deluded person see reality, not try to change reality (through mutilation of the genitalia) to fit the delusion.

Both sides in the debate cite the high suicide rates of homosexuals and transgendered: those advocating for trans and gay rights blame social hostility and push for laws suppressing it; those opposing Bill 77 claim the conditions themselves lead to suicide.

The Post’s Barbara Kay believes the issue as far as transgendered people goes is resolved by a Swedish longitudinal study showing suicide rates among post-operative trans people to be 20 times higher than the general population.  She reasoned: “If depression persists in so many people who have surmounted the only perceived obstacle in the way of their happiness,” then surgery is not the cure and being born in the wrong body is not really the disease.

What bothers Campaign Life Coalition vice president Jeff Gunnarson is that the bill passed without opposition. “Is this how democracy is supposed to work? I’m baffled,” he told LifeSiteNews, after watching the bill pass third reading. “If there are Conservatives who voted against it I didn’t see any.” On second reading, the bill passed unanimously, with a majority of the Progressive Conservative caucus absent from the Legislative Assembly.

Gunnarson noted that CLC urged members to support Patrick Brown’s successful campaign for the Conservative leadership. “He should have had his caucus oppose this bill as a way of affirming all that support he got from social conservatives.”

Dr. Berger told LifeSiteNews that LGBT advocates want to prevent others from overcoming their homosexual or transgendered feelings because this would imply such feelings were wrong. But banning SOCE is a mistake because “between 20 and 40 percent say they have homosexual feelings in their teens, but only 1-2 percent say so later. So I would avoid doing anything with a teenager that suggests his homosexual feelings are fixed.”